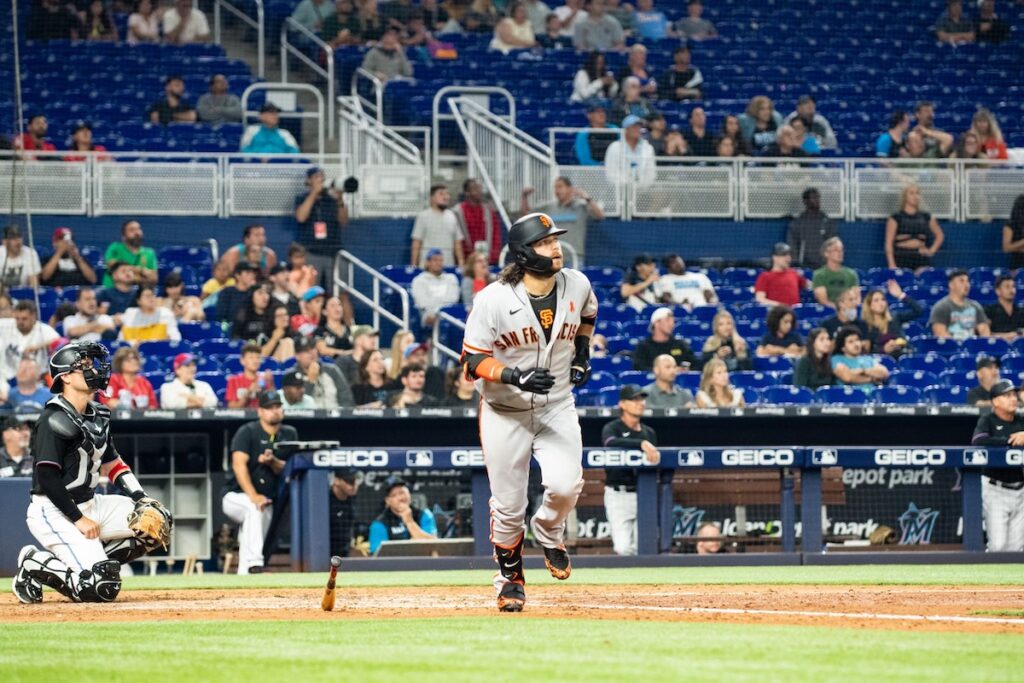 Miami, FL – Sandy Alcantara was brilliant last night and took game one of their four-game series against the Giants. What a difference 24 hours can do to a baseball team. The Miami Marlins blanked San Francisco’s offense, but game two played out a lot different in favor of the Giants.

In game two, Elieser Hernandez was scheduled to start the game. Manager Don Mattingly decided to change things up and announced prior to the game that they will be using an opener instead of Hernandez. Richard Bleier was named the opener for Miami with the multiple left-handed hitters the Giants have at the top of their lineup.

Elieser Hernandez scratched from his start today for the @Marlins and Richard Bleier will start the game.Brandon Crawford brought in Flores with a RBI groundout after he led off the game with a single. Giants up 1-0. @LemonCityLive #MakeItMiami

Bleier was making the second start of his career at 35 years old and it didn’t go according to plan. He faced five batters and two of them were lefties. He was not able to retire either lefty and the Giants were the first ones to score after pushing across a run in the opening frame. Jazz Chisholm Jr. saved a second run from scoring when he made a diving grab on Brandon Crawford‘s RBI groundout.

After a long first inning, the Marlins were trailing but were only down by one run. That would change quickly once Hernandez entered the game in the top half of the second.

The beginning of the 2022 season has been a stretch that Hernandez would like to forget. Going into his outing, he had a 2-5 record and his earned run average was a whopping 5.77. The decision to use an opener was made to help Hernandez avoid the top of the Giants lineup. He has struggled to pitch the second and third time around through a batting order but the Giants were not thrown off with the pitching change.

San Francisco greeted Hernandez in the second inning when they tagged him for four runs. After just two innings, Miami was already down 5-0. His outing did not get any better as the game progressed. Hernandez pitched 4 1/3 innings and the Giants scored in every inning he pitched except in the fourth.

This opener experiment hasn't quite worked out.#Marlins down 5-0 in the second inning after Mike Yastrzemski's three-run homer.

Elieser Hernandez has now given up 15 homers — tied for second most in #MLB.

It seems like this tactic was used to help Hernandez but the results were still the same and probably his worst outing of the season. Hernandez had given up 14 home runs going into the game. That number would unfortunately go up after surrendering four more long balls. The 18 home runs he has given up now leads Major League Baseball.

Marlins on their way to 2-9 when Elieser Hernandez pitches. They tried something new tonight and it still didn’t work. They are giving up a game every 5th day at the moment.

Jason Vosler was the last player to homer off of Hernandez before Mattingly saw enough out of the right-hander. Maybe Mattingly left him out there an inning too long, but Hernandez needed to eat up innings. There are two more games left in the series and Miami has used most of its bullpen. When it was all said and done, Hernandez gave up eight earned runs but did strike out seven Giants. Once he left the game, Miami was in a hole losing 9-2 and the chances of a comeback looked even slimmer.

Elieser Hernandez spoke to the media with a translator after tonight’s game and he talked about what he does to prepare for a start and what he needs to do to turn his season around. @LemonCityLive @firstpitch305 #MakeItMiami @Marlins pic.twitter.com/LZ0NvfZHnS

Louis Head entered the game after Elieser with one out in the 6th inning. San Francisco’s offense continued to light up the scoreboard and piled on six more runs in the 1 2/3 innings pitched. Brandon Crawford’s 7th inning grand slam was the icing on the cake for the Giants blowout victory.

Cole Sulser pitched a clean 8th inning and it was the only 1-2-3 inning for the Marlins all game. Since they were already down 15-3, Miami had position player Willians Astudillo on the mound to get the last three outs. His nickname is “La Tortuga” (The Turtle) and for good reason since his curveball was hovering in the 30’s.

Highlight of the night: Willians Astudillo pitching and throwing a 38 mph something or other! 🐢

Jazz Chisholm Jr. even managed to make another great play on this stab. pic.twitter.com/AKfpXTqnii

The Giants had a comfortable lead going into the final inning and they responded with their own position player on the mound. Donovan Walton did not have the same success as La Tortuga. Miami scored three runs off of him and Jesus Sanchez led off the inning with his 7th home run of the season. Nick Fortes and Garrett Cooper chipped in that inning with RBI singles. Fortes also had a home run in the bottom of the 6th inning and finished with two RBIs in the game.

After a long game, the outcome looked like a football score with the Marlins getting blown out 15-6. Miami has a chance to take the series lead with Pablo Lopez on the mound tomorrow. First pitch is a bit earlier starting at 4:10 pm.