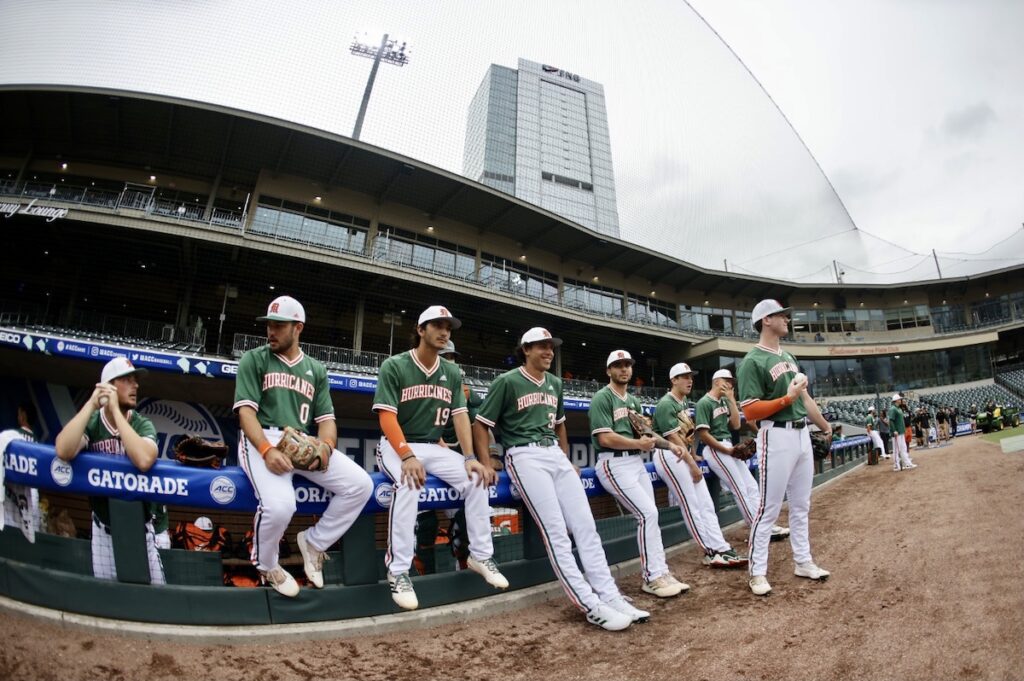 Miami, Florida – If someone told me the Miami Hurricanes were going to be winless through the ACC Championship I would have been pretty skeptical. What a disastrous showing. You can make the argument they didn’t show up at all. Miami stumbled in their first game against NC State Wednesday night losing 9-6.

The Wolfpack hammered four of the six home runs struck, three of them by Tommy White. He absolutely feasted on UM’s pitching making a huge impact on the final score. Ace starting pitcher Carson Palmquist struggled in his outing unable to last past the fourth. Reliever Ronaldo Gallo did a little better.

TOMMY TANKS WITH HIS 3RD HR OF THE GAME. NUMBER 2️⃣6️⃣ ON THE YEAR. SETS A SCHOOL RECORD.@tommywhite44 | @NCStateBaseball pic.twitter.com/Bf31CDuOSb

The Hurricanes did attempt a rally in the ninth but were unable to pull it off culminating in Yohandy Morales striking out with two on. Just like that The U’s hopes to make it to the semi-finals were gone. Things went from bad to embarrassing. No. 6 ranked Miami was mercy-ruled by Wake Forest 16-3 in game two on Friday. Although the contest was irrelevant as far as the tournament was concerned, finishing 0-2 has been a real disappointment to put it lightly. Without a doubt, the Canes will remain hosts for the regional. However, the demoralizing result may push them out of the top 8 and jeopardize their ability to also host the super regionals. The outcome will be dependent on how the other teams around them in the rankings conclude their own efforts. The weekend’s projections are an excellent example.

The march to Omaha

On Saturday, D1 Baseball replaced Miami with Notre Dame in the top eight national seeds. That stung a bit. However, the Hurricanes slipped right back in after Southern Miss and the Fighting Irish both lost later that day. Momentum is a crucial element of a team’s success. My hope was that the Hurricanes would bounce back over Wake Forest riding into the regionals with a win. Instead, they’re limping into it. It remains to be seen whether or not the Canes will host both rounds. It’s been a crazy last few days. Frankly, they don’t deserve to. Not with that ugly performance in Charlotte.

UM did what it had to do in the regular season in order to host a regional which is huge. However, there is a concern that after getting batted around in the ACC postseason the boys are not up to the task. The home-field advantage will provide a necessary boost but it won’t mean anything if they don’t play to their true potential when it matters most. I’m not going to lie, my excitement has been blunted. Hopefully returning to The Light will give them the edge they need. Miami is 28-8 at home, after all.