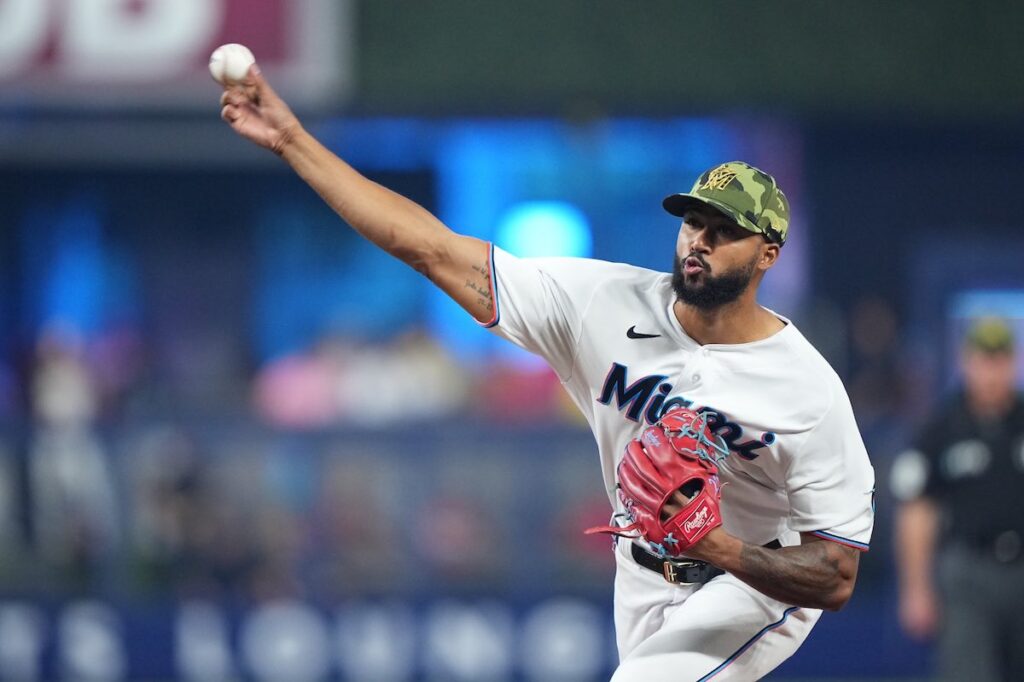 Miami, Florida –Miami’s ace Sandy Alcantara weaved one of his best starts in 2022 seeing today’s game to the very end as the Marlins held off the Braves 4-3. Atlanta rallied late but The Sandman shut the door to preserve the 115 pitch effort in front of a crowd of 17,908 on Military Appreciation Day. Alcantara allowed three runs, all unearned, and struck out seven earning his fourth win of the season.

As Sandy lowers his ERA to 2.11 the Fish raise their record to 18-22 snapping a three-game losing skid. Both Brian Anderson and Jacob Stallings led the way on offense with each recording two hits and an RBI. Jazz Chisholm Jr. exited early with left hamstring tightness.

Miami scored on their first trip to the plate. Garrett Cooper hit a sacrifice fly deep enough to allow Chisholm to score. Jazz would not remain in the game long, however, substituted in the third by Joe Dunand. The Fish had an opportunity for more when Stallings led off the inning with a double but the next three hitters were swiftly retired.

Atlanta nearly tied it in the fourth when Ronald Acuña Jr. hit a towering double to left field. He made it as far as 90 feet away from home but was held there by Dunand and Jesus Aguilar on the one out Marcell Ozuna grounder. They would pull even the following frame.

It's the reverse jinx from @SeverinoMLB as Brian Anderson comes through to put the @Marlins ahead!

Ozzie Albies reached third base on a costly fielding error by left fielder Jesús Sánchez. Sánchez wheeled over just in time only to botch the catch near the wall allowing Albies to get well into scoring position. Dansby Swanson brought him home with an RBI single.

Anderson responded with a clutch hit in the sixth plating Cooper who led off with a walk. Miami scored again after the seventh-inning stretch. Erik González singled on a line drive to the left side and then stole second advancing to third on the errant throw. Stallings came through with an RBI hit extending the lead 3-1. The Fish tacked on one more via a sac fly from Avisaíl García. The Braves made things interesting with late-inning runs from Albies and Swanson although the sweep was ultimately averted.

A great outing by the ace pitcher. We’re seeing the Sandy we know and love with his third straight quality start and first complete game of the year. Miami really needed this win to cut short the losing skid. Alcantara has been off to a strong start despite a minor hiccup at the beginning of this month. Speaking of, I’m happy at the turnaround of Aguilar who hit .231 in April and is now hitting .316 for the month of May. Cooper produced a good weekend going 4-for-7 (.571) including a pair of walks, two doubles, and two RBIs. Keep it up, fellas.

The @Marlins have Monday off before the Citrus Series showdown with the Rays on Tuesday! #MakeItMiami pic.twitter.com/EalOOllW94