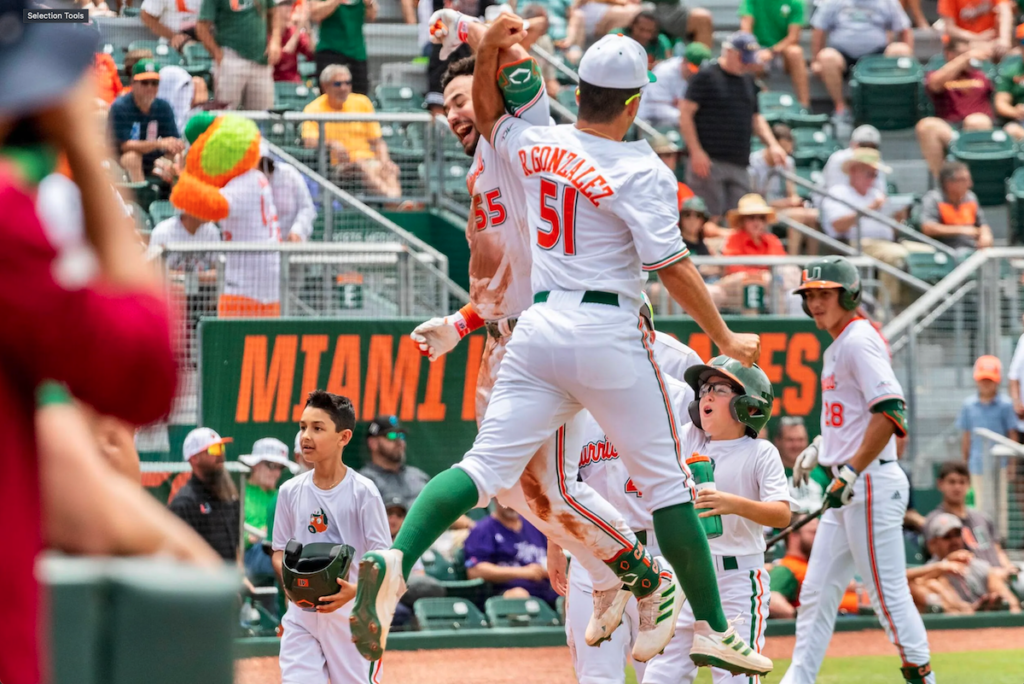 Miami, Florida – After falling flat Friday night, the Miami Hurricanes made a strong case for a national seed crushing six home runs to down Notre Dame 16-7. The power surge is the most in a game since June 2, 2019, versus Central Michigan. For those who can’t recall that was in the Starkville Regional where they won 18-3.

The performance was a stark contrast to yesterday’s contest. UM was held to five hits squandering a couple of late-game opportunities. Compared to today, they were 4-for-6 with runners in scoring position.

An offense as hot as the weather

Check out the highlight's from the regular season finale! pic.twitter.com/0juM4tJ9Pw

The U imposed its will going deep thrice in the first inning capping a seven-run effort chasing off ND starter Jack Findlay. Maxwell Romero Jr. went yard in the first and fourth frame going 2-for-5 with three RBIs.

Zach Levenson and Ariel Garcia contributed to the barrage while Dominic Pitelli slipped in an RBI single during the team’s first trip to the plate. Levenson went 3-for-3 driving in two and was hit by a pitch in today’s action. Garcia finished 2-for-4 with his own pair of RBIs.

Miami kept it rolling launching three more over the fence, putting up deuces for the third and fourth frames. Gaby Gutierrez, who had a productive day going 2-for-2,  joined the club blasting the ball to left-center making it 9-0 before Romero and UM Rookie of the Year winner Jacob Burke went back-to-back.

Notre Dame did not go quietly, however. Alejandro Rosario was cruising until the fourth inning when Jack Brannigan smashed a no-doubter to left field for the three-run shot. The Fighting Irish tacked on two more in the fifth reducing the deficit 11-5.

Rosario lasted four and two-thirds giving up five runs on five hits. The visitors threatened to score more but Ronaldo Gallo was called in relief retiring Brannigan to get out of the bases-loaded jam. After the seventh-inning stretch, the Hurricanes charged forward adding five more runs including a pair on two separate wild pitches.

I’ve only been covering the Canes since 2018 but I’m not going to lie, this is arguably the best team I have seen in that span. There’s one caveat to this: 2020. The COVID shortened season ended what might’ve been a tremendous run by Miami. What if?

One of the remarkable traits about this year’s squad is how young they are. There are only four seniors: JP Gates, Anthony Arguelles, Jordan Dubberly, and Matt Raudelunas. Looking at the roster, you can see why the phrase Super Sophomores rings true. Given how stacked the ACC is, their success makes it all the more special. Finishing 39-16 (20-10, ACC) Miami overcame their recent struggles at Georgia Tech and Florida State. In fact, they won seven of 10 ACC series including five in a row earlier in the campaign. I am very excited to see the team play in the regionals.

When I think of the offense, one of the first faces that come to mind is Yohandy Morales. Yoyo is a force to be reckoned with on the field and at the plate, certainly showing that quality of sparking his teammates. He is but one of several potent weapons (Hello CJ Kayfus) in that lineup. He won’t be with the program for long, not with the MLB Draft coming up.  Carson Palmquist led the weekend rotation as the ace tossing several gems but the guy who really shut it down on the mound was Andrew Walters.

In 29 innings of relief, the kid gave up four runs, walked five, and struck out 55. Walters is rocking a sharp 0.52 WHIP. They certainly had their ups and downs but the boys have recovered. After their uplifting performance versus Notre Dame, fans can legitimately feel optimistic about making it back to Omaha.

That reminds me, Friday’s game was Senior Day. Out of all the guys, Gates stands out for me. He’s been with the program for what feels like forever now, UM’s own Udonis Haslem. Gates helped the program as a hitter in his first year and as a reliever. Ironically, 2020 was his best showing on the bump. Each of the outgoing players will move on to bigger and better things with a plethora of happy memories perpetually adding their names to the program’s history. Luckily for them, this was not their final game at The Light.

End of the year awards

The Bob Werner Award: J.D. Jones. Given annually to the player who most exemplifies the qualities of a winner.

Ron Fraser Award: Andrew Walters. Awarded to the Hurricanes’ pitcher of the year.

Rookie of the Year: Jacob Burke