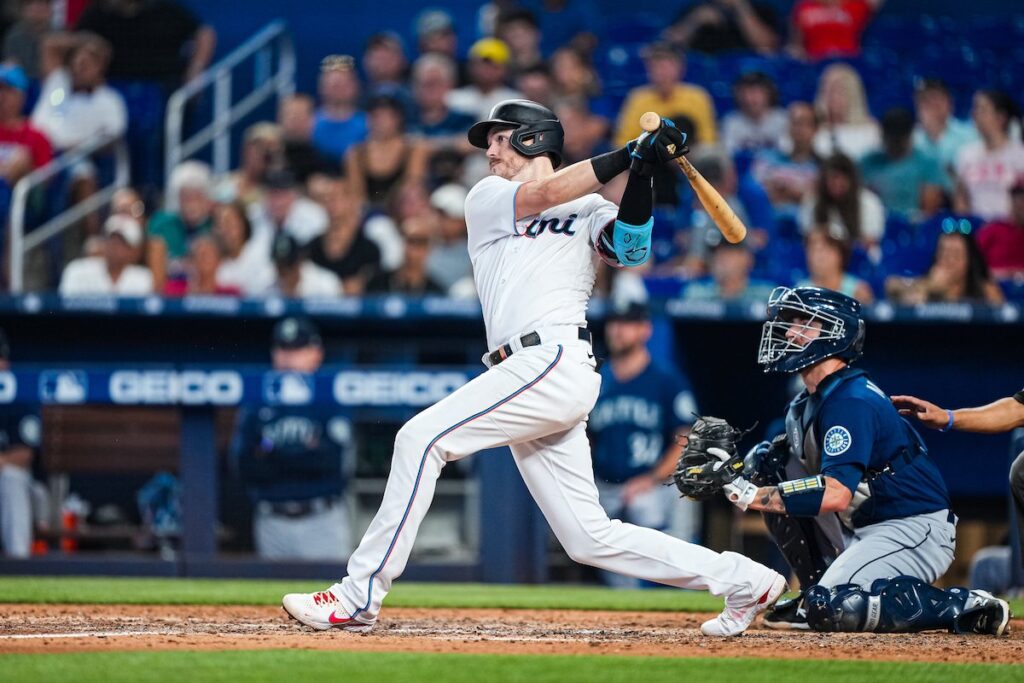 Miami, Florida – Sandy Alcantara was not himself as the Miami Marlins lost on Sunday’s Bark at the Park 7-3 to the Mariners snapping their seven-game winning streak. Miami’s ace lacked dominance, laboring at times during his near six-inning stint giving up five runs (all earned) on six hits including two homers. He was a mixed bag fanning six but also walking four on top of a hit-by-pitch.

Seattle’s Logan Gilbert shut down the offense, no-hitting the Fish until the home half of the fifth, ultimately keeping them to a run on his outing. Despite the stumbles at the dish, the bats came alive in the latter half of the contest. Managing to string together several hits, the big inning remained frustratingly elusive. The team was two-for-nine with runners in scoring position stranding a dozen including a golden opportunity after the seventh-inning stretch.

Struggles on the mound and plate

Seattle broke through in the second when J.P. Crawford got a hold of The Sand Man’s 97 mph fastball airmailing it into the seats at right-centerfield. Abraham Toro extended the lead, hammering an RBI single to left field in the fourth.

On the other side of things, the hitting was really slow to get going. After an anemic four and two-thirds innings, Jon Berti finally recorded the ballclub’s first hit of the game. Garrett Cooper followed suit. Jorge Soler stayed alive with the E-3 from first baseman Ty France in foul territory but went down swinging regardless.

Things went from bad to worse for Sandy.

Julio Rodríguez busted the game open with his first career home run in the sixth, a three-run shot to left-field making it 5-0 M’s. Alcantara would not see the next batter with Steven Okert taking over. That same inning, Brian Anderson injected some life into the crowd, hammering one deep to center field for his first homer of the season breaking up the shutout.

Miami’s chance to rally came in the seventh. Berti and Cooper hit back-to-back singles with the former scoring on a Soler base hit. Eventually, Andy found himself at the plate with the bases loaded only to go down looking in a crucial at-bat.

The M’s went on to tag two more in the ninth for insurance. Soler did go deep but it was already too late.

It was an aggravating end to a very exciting series. The bright side is the guys were able to take two of three. If the Marlins can do that on a consistent basis they’ll be in good shape. Keep that in mind.

There were a lot of heroes this weekend. The Fish outscored their interleague play opponent 11-7 heading into today’s game. In the series opener, you had Soler and Miguel Rojas go deep with Jesús Aguilar hitting the go-ahead RBI single. Jesús Sánchez, meanwhile, padded the advantage plating two on the base hit.

Game two was a battle between southpaws and Jesús Luzardo came out on top over AL Cy Young Winner Robbie Ray. There was drama for the bullpen the first two nights but they held the line. At the previous trade deadline last summer, I was cautiously optimistic about Jesús Luzardo. Thus far, the faith has been well placed.

At 12-9, Miami has plenty of momentum to work with to welcome Zac Gallen and the Arizona Diamondbacks. One series at a time folks.