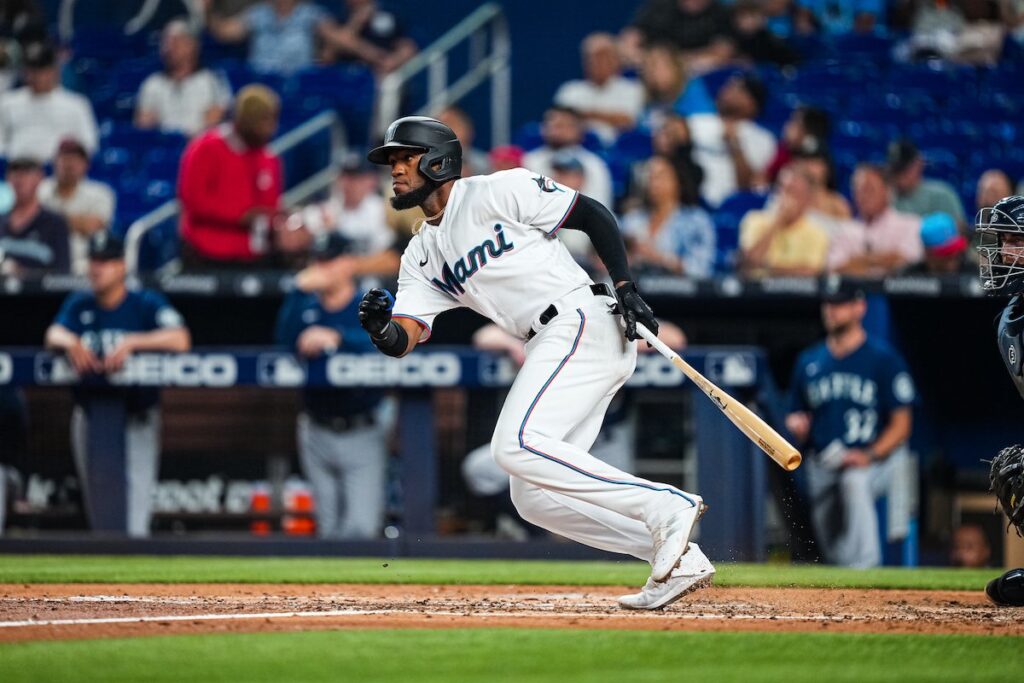 Miami, Florida – Jesús Luzardo outdueled 2021 Cy Young winner Robbie Ray in the battle of the lefties as the Miami Marlins defeated the Seattle Mariners 3-1. Luzardo pitched six strong innings, two hitting Seattle giving up one earned run while collecting his 200th career strikeout in front of a crowd of over 29,000. He was supported by timely hitting from Bryan De La Cruz and Jon Berti.

The win propels the Marlins to four games above .50o at 12-8 riding a red-hot seven-game winning streak.

Talking to Bryan De La Cruz after the game. He walked me through his crucial at bat that tied it up for the @Marlins tonight and helped the Fish extend their win streak to 7 games! #MakeItMiami @LemonCityLive pic.twitter.com/d3iWMWDc0I

Luzardo was initially up and down through the first three innings. After retiring Abraham Toro and Ty France to start the game, he surrendered a single and a walk before getting J.P. Crawford to ground out to third baseman Brian Anderson. Luzardo struck out the side in the second but gave up a solo shot to Dylan Moore the following frame, his first of the year on a full count. The damage turned out to be minimal.

The lefty sat down Tom Murphy for the second consecutive time in the fifth recording his 200th K. This was also Miami’s big inning.

Andy led off with a double proceeded by a sac fly from Miguel Rojas to advance the runner. De La Cruz poked one through the left side for the RBI single to tie it up. Berti followed suit with his own RBI base hit. Garrett Cooper extended their lead drawing the bases-loaded walk.

#Marlins settle for a 3-1 lead after five innings.

Robbie Ray walked three batters in the fifth. He entered tonight with eight walks on the season.

Miami batters have 76 walks on the season — tied for fifth most in #MLB.

From the seventh onwards the bullpen admirably protected the lead mitigating the Mariners. Anthony Bender gave fans a heart attack in the final inning but fanned Luis Torrens with runners at the corners to nab his sixth save of the year.

Although Seattle is in a bit of a slump, beating a team that’s good against the fastball is very encouraging. Distinctly with Luzardo on the mound. This goes double when you’re outperforming a Cy Young winner in Robbie Ray. The heater made up a third of his pitches. Yes, Moore did get a hold of one yet the southpaw still found success. Luzardo has improved a lot from last year working on his mechanics and we’re seeing some of that effort bear fruit.

After a slow, lackluster start to the 2022 campaign, the Fish are not only on a seven-game winning streak but within striking distance of the first-place New York Mets. Sure, it’s early, however, winning in front of a lot of fans adds to the ballclub’s growing momentum as they go for the series sweep tomorrow.