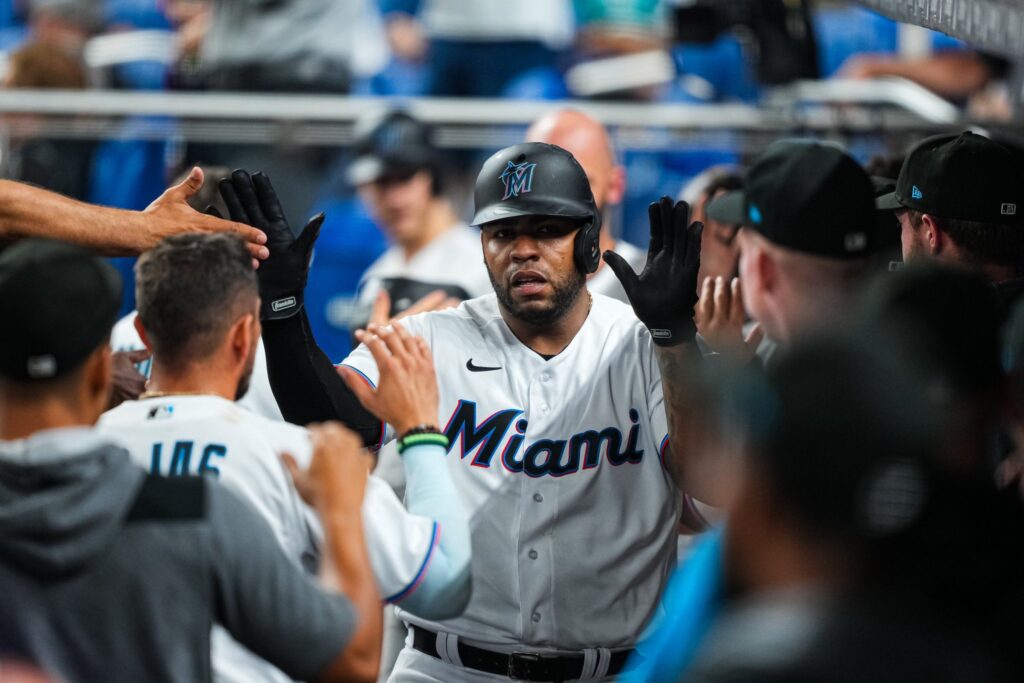 The Miami Marlins are back home taking on the Seattle Mariners after a successful road trip. Going into tonight’s game, the Marlins were riding a five-game win streak and pushed their record to 10-8. That’s the first time their record was above .500 while playing in Miami since 2017.

Miami went 5-1 on the road trip, taking two out of three from the Atlanta Braves and sweeping the Washington Nationals. That was a critical stretch since it was against rival National League East Division opponents.

Miami had Elieser Hernandez on the mound tonight. Alcantara, Lopez, and Rogers all had quality starts and went deep into their games. It was Hernandez’s turn to keep the streak alive.

Minutes away from first between the Seattle Mariners and @Marlins Miami is on a five game winning streak and Elieser Hernandez is on the mound to continue it. @LemonCityLive #MakeItMiami #LetsGoFish pic.twitter.com/3FRoJECHsr

Out of the Gates Swinging

The Marlins did not waste any time to set the tone in their series opener against Seattle. Jesus Aguilar got the Marlins’ offense going with an opposite-field single to right field. Jorge Soler was next and he followed up with one of the biggest blasts of the young MLB season.

Into the Soler System! pic.twitter.com/i4XNvA9vG3

Soler’s home run was estimated at 468 feet which is the third-longest homer by any MLB player this season. It is also the fifth-longest in loanDepot Park history. Soler spearheaded Miami’s offense with an early 2-0 lead and the rest of the lineup followed.

In the bottom of the second inning, the Marlins immediately responded to the three runs Seattle scored in the top half of the inning. Brian Anderson led off the inning with a single and Joey Wendle followed that up with a four-pitch walk. Miami’s captain, Miguel Rojas, was back in the lineup after being hit in the helmet by a pitch last game. He loaded the bases with a single.

Jorge Soler’s comments after the game on his mindset hitting lead off to start the season and now hitting third recently. @LemonCityLive Soler sparked the @Marlins offense today with a two-run homer in the first inning. #MakeItMiami #LetsGoFish pic.twitter.com/bEghk3PgSK

Jacob Stallings was next in the lineup and Miami’s catcher was able to leg out an infield single down the third-base line to bring in Anderson. After Jazz struck out, Aguilar went opposite field again with another single. Wendle was able to score but Rojas was thrown out at the plate for the second out.

Seattle’s starter, Matt Brash, wanted no part of Soler the second time around in the order and the right-hander walked him. Jesus Sanchez placed the final touches on Miami’s second-inning rally by ripping a single up the middle to center field. Aguilar and Stallings were able to score and the Marlins had a 6-3 lead.

After Elieser Hernandez responded with a quick third inning, the Marlins’ captain came through again. Rojas blasted his first home run of the season with Avisail Garcia on second base. Miami extended their lead to 8-3 and it would stay that way until the ninth inning.

The Clock is Ticking for Elieser

Max Meyer fans will have to wait a bit longer for his Miami Marlins debut. Miami’s top prospect has been dealing this season at the Triple-A level. Although it is still early in the season, Miami is sitting as one of the top teams in the division. They have established a solid top of the rotation with Sandy, Pablo, and Trevor, but maybe a Meyer call-up to the big leagues can take this pitching staff to the next level.

Big start tonight for Marlins SP Elieser Hernandez tonight against the Mariners. Win-now mode and you have these numbers from Max Meyer sitting in AAA ready to go. Gotta give Hernandez another chance (or two) but hard to justify beyond that. pic.twitter.com/JDvPnNJ9KZ

Hernandez’s start tonight was one of the better outings he has had this season. Hernandez pitched five innings, struck out five, and kept his team in the game. The only stain on his start was the second inning when Hernandez gave up three runs. He loaded the bases. Then, with two outs, Seattle’s catcher, Luis Torrens, cleared the bases with a three-run double.

Luckily for Hernandez, Miami’s offense responded the following inning and he pitched three shutout innings after that. If Miami is in the thick of things midway through the season, we might see Meyer on the mound in a Marlins jersey. He could be the boost that takes this team to another level.

Shaky Ending, But Got the Win

Shawn Armstrong was given the ninth inning to shut the door on Seattle for good. With an 8-3 lead, Armstrong was only able to get one out in the inning and Mattingly had to go to his closer on a day that he was hoping he didn’t have to use him. Anthony Bender was able to get the final two outs of the game but Seattle made it interesting by scoring three runs in the final frame, all charged to Armstrong.

Tomorrow’s game will be a southpaw battle. Robbie Ray will be on the mound for Seattle and Jesus Luzardo for the Fish. Let’s see if Miami’s win streak cann reach lucky number seven.