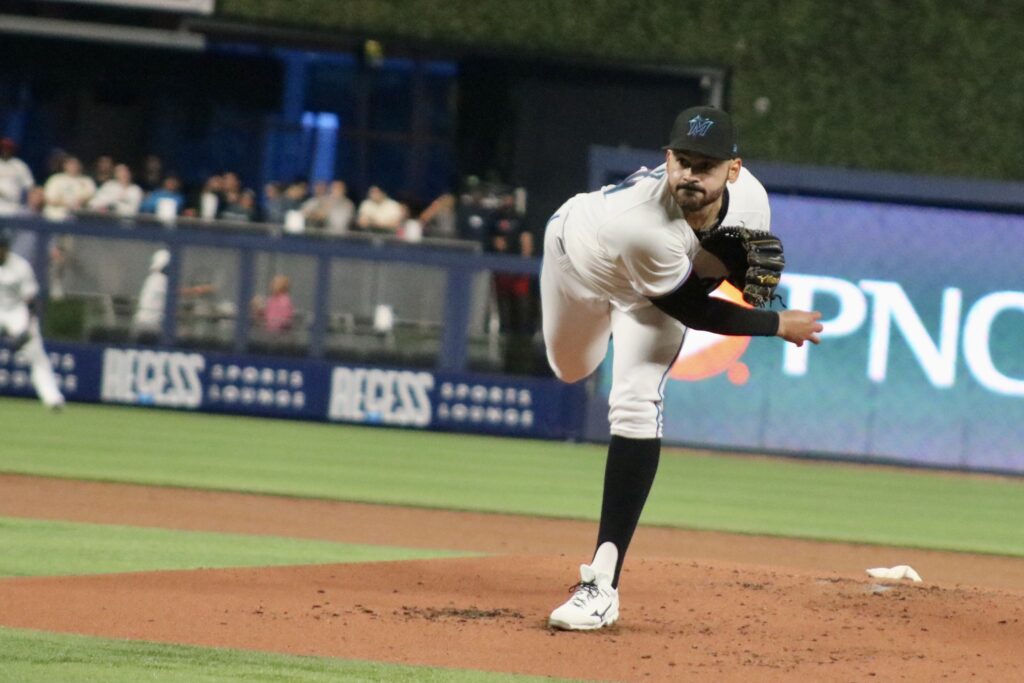 Miami, Florida – There would be no sweep Thursday night as Jesús Sánchez and Jazz Chisholm Jr propelled the Marlins over the Cardinals 5-0. The duo used a combination of both small ball and the fan-favorite long ball to stave off a talented St. Louis team that sought to bust out the brooms giving Pablo López’s quality gem a big boost.

Lopez squared off against an interesting opponent in flame-throwing reliever Jordan Hicks. The 25-year-old righty made his first career start in Miami, recording three strikeouts in three innings of work giving up an earned run. López, however, dominated the mound going seven deep keeping the Cards off the board. Pache punched out nine including the venerated Albert Pujols on three occasions.

The Marlins, Sánchez especially, made the most of their opportunities. The centerfielder found ways to get on base and crossed the plate not once, or twice but thrice. He scored on a fielder’s choice from Brian Anderson’s grounder in the second inning after leading off with a walk. Then did it again on a passed ball in the fourth after getting a base hit before hitting a solo shot in the sixth for the cherry on top.

Chisholm lifted his own dinger over the fence following the seventh inning stretch for bomb number three in 2022 making it 5-0 Fish. Interestingly enough, during the at-bat, there was a bit of an exchange between him and home plate umpire Phil Cuzzi. Jazz is not a fan of it. Tanner Scott and Anthony Bass had reliable evenings via the bullpen to finish off the visitors.

"…love playing behind him, and I can't wait to see what he does for the rest of the year"

Jazz Chisholm Jr. speaks about his HR, growing as a player, getting back to the top of the order, Pablo López's performance, and more@Marlins | #MakeItMiami pic.twitter.com/z1qrkXLaGu

Frankly, despite the sweet victory in the finale, it was a very frustrating series. The Marlins dropped the first game losing 5-1 after falling behind early and the struggles at the plate continued in game two. The offense was nowhere to be found, squandering yet another quality gem from Sandy Alcántara. The Sand Man put up eight scoreless innings going the distance fanning six only to see it all come undone with Nolan Arenado taking Anthony Bender deep for the two-run blast. You can blame the bullpen all you want but the bats have been atrocious. Five hits? Here are some numbers.

Heading into Thursday night’s game the Fish were 0-for-11 with runners in scoring position stranding 16 in total. Miami was outscored 7-1, the top four of the lineup were 6-for-28 (.214) with the bottom three 4-for-23 (.174). For specific people, Garrett Cooper went 1-for-6 (two walks), Jesús Aguilar 1-for-7 (one walk), and Avisaíl García 1-for-6 (K’ed twice). Jorge Soler was downright hitless going 0-for-6 with three whiffs. Soler broke the funk tonight with a double in the seventh. Of these, only Aguilar managed to really improve at the plate going 2-for-4. The hitting tonight largely centers in the heart of the order with a spark from the top. Miami was 2-for-10 this evening with RISP leaving five. I love the win and who knows maybe this is the start of a brilliant run to close out the month of April.