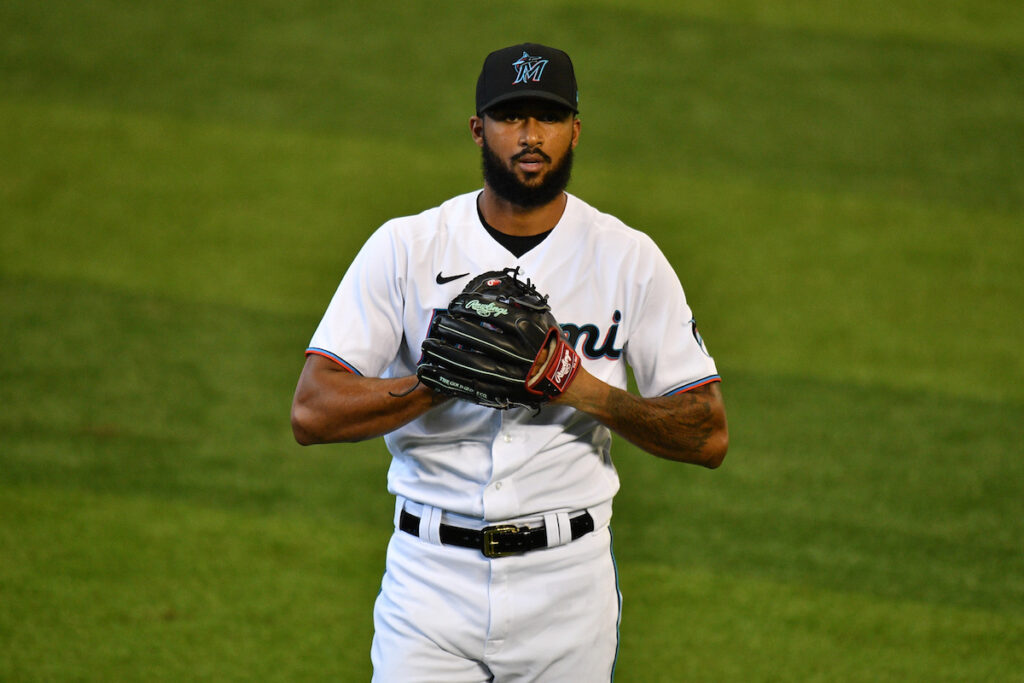 Miami, FL – Sandy Alcantara did everything he could possibly do to secure a win for the Miami Marlins. After eight shutout innings, it only seemed right that he earned the win. But sometimes, baseball isn’t fair and the Marlins did not tie the series last night against St. Louis and lost 2-0.

The Marlins dropped game one of their series against the St. Louis Cardinals Tuesday night but seemed in good shape to even the series with their ace on the mound for game two. When it is Sandy’s day to pitch, the Marlins are in a great position to win any game. For today’s game, however, the Fish just weren’t able to get all 27 outs before the Cardinals blanked the Marlins offense and rained on Alcantara’s parade.

Coaches are meeting and it’s almost first pitch between the Cardinals and @Marlins Miami looks to even up the series against St. Louis after dropping game one. Cant wait to watch Sandy on the mound! @LemonCityLive #MakeItMiami #LetsGoFish pic.twitter.com/DhO26jz9P7

Alcantara went up against the team that scouted and signed him. Alcantara was the main piece Miami received in the Marcell Ozuna trade back in the 2017 offseason. After making his debut with Miami in 2018, Sandy was an All-Star in 2019 and has been the leader of the Marlins rotation. He’s also had lots of success against his former team but for some reason, Miami’s offense never shows up on those days.

The Marlins have lost all 4 of these games 🤦‍♂️ https://t.co/pEeFkwpNdl

No Run Support for Alcantara

It was not an eventful night on offense for either team. There were 10 hits in the game between both teams with only one extra-base hit. That lone extra-base hit came in the ninth inning by Nolan Arenado, but we’ll get to that later.

The Marlins lineup was up against Miles Mikolas, who was making his 2022 season debut for St.Louis. Mikolas looked like he was back in 2018 when he was an All-Star and led the league in wins. The St. Louis starter pitched five shutout innings and kept the Marlins off balance collecting five strikeouts.

Miami left 8 runners on base and struck out 11 times as a team. The Marlins were not able to get the clutch hits when they did have runners on base compared to the prior series against Philadelphia. Miami only pieced together four hits off of Mikolas and rallies constantly ended with strikeouts and poor at-bats.

After Cooper led off the inning with a single, Sanchez and Aguilar struck out and Garcia grounded out to third.
Sandy is returning for the seventh inning and it would be great if the lineup can give him some run support. Pitching his tail off @LemonCityLive @Marlins #MakeitMiami

Things did not get any easier once Mikolas left the game with no outs in the sixth. Garrett Cooper led off the inning with a single and Andre Pallante was the first Cardinals pitcher out of the bullpen. St. Louis’ bullpen kept the Marlins out of the runs column while Sandy was a one-man wrecking crew.

Sandy had a shaky first inning and struggled with his command. He threw 27 pitches in the opening frame but was able to get out of a jam with runners on second and third base and one out. Alcantara was lights out from that point on. After the first inning, the Cardinals recorded only three hits off of Alcantara and he was breezing through innings.

The game remained scoreless up until the ninth inning. Once Sandy complete his eighth shutout inning, a tough decision was made by Manager Don Mattingly. Alcantara’s pitch count was at 98 and the Marlins decided to go with a fresh arm in the ninth.

Sandy on wanting to go back out for the 9th, "Always, I like to throw nine innings always. I gotta respect that decision. When he (Mattingly) came to me, and he looked at my face, he didn't want to take me out of the game. Just gotta keep being positive." @Marlins @LemonCityLive pic.twitter.com/74tWBaB5l0

Anthony Bender was tasked with keeping the game tied at 0-0 in the ninth inning. After getting Paul Goldschmidt to strike out, Bender walked Tyler O’Neill. The go-ahead run was now on base and next in the lineup was the Cardinal’s premier slugger, Nolan Arenado. On a 0-1 count, Arenado took Bender deep on a sinker that stayed up in the zone.

Those were the only runs of the game and the only runs needed for St. Louis to win the game and the series. At some point this season it would be nice to see Sandy go the distance. He has done it three times in his career already. Maybe there were some factors that played into Alcantara not going out for the ninth inning.

His pitch count could have been a possibility. Alcantara was closing in on 100 pitches after he finished the eighth. Since we are only in mid-April, maybe Mattingly and pitching coach Mel Stottlemyre decided not to overwork the young right-hander before they reach the dog days of summer.

— Stayed down in the zone
— 0.99 career ERA vs. former club in 4 starts
— Only 2 three-ball counts after the first inning#Marlins pic.twitter.com/ldLphIiOMv

Another reason can be that Alcantara would have been starting with the top of the Cardinals batting order in the ninth inning. That would be the fourth time those hitters got to see Alcantara on the night. There will always be that constant battle between the new age of baseball with advanced analytics and the old school mindset of letting the pitcher finish his start.

Hitters do get better the more times they see a starter within a game but sometimes when it’s your night, it’s your night. Alcantara struck out Arenado three times before his ninth-inning home run and ironically he was the one to break the tie. It’s a shame Miami couldn’t get the win for Alcantara but this definitely will not be the last time we see him have a chance for a complete game shutout.

The Marlins will wrap up their series against St. Louis tomorrow and then hit the road. Jordan Hicks will be on the mound for the Cardinals for the first start of his young career. Hicks has been used solely as a reliever and has found success thanks to his electric fastball reaching triple digits often. Pablo Lopez will be on the mound for Miami with a well-rested bullpen. A win tomorrow before a crucial road trip can help take away the awful taste of defeat. Especially after a loss like this one.