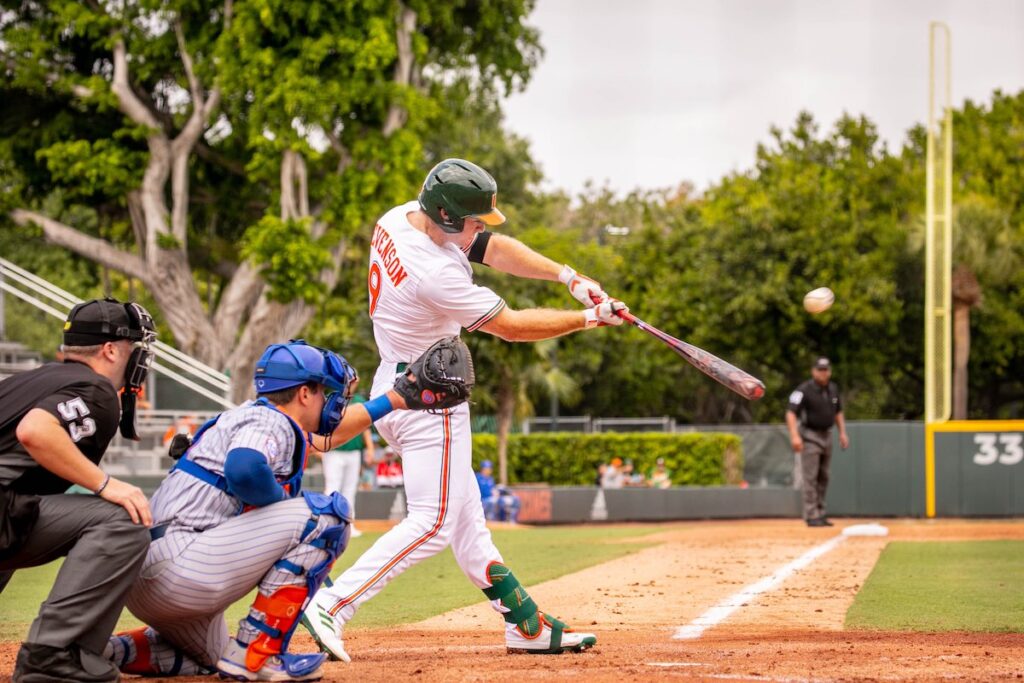 Former Hurricane and World Series champ Jon Jay threw the ceremonial first pitch beginning what turned out to be an infuriating afternoon for the home team.

Sunday became a bullpen day for the Canes deploying nine pitchers resulting in varying degrees of “success”. The staff issued an eye-popping 14 walks combined. Jake Garland was pulled in the third unable to bully the Gators at the plate. The relief corps did its part restraining Florida until the sixth but the hitting did little to close the gap. In addition, the top four slots of the lineup went a combined 3-for-17.

Conversely, Gators starter Timmy Manning pitched four and a third innings setting a new career-high. Manning struck out five and walked two. The loss puts No. 22 Miami at 8-3. Their next opponent is crosstown rival FIU on Tuesday.

The Gators found the gaps scoring three runs on four hits in their first trip to the plate. Jud Fabian smacked an RBI double down the left-field line followed by Sterlin Thompson hitting a single to left-center driving in another run. UF scratched its third via a sac fly from Josh Rivera.

Jordan Dubberly was tapped to relieve Garland in the third inning with two on and one out. He was the first of many. Dubberly proceeded to walk BT Riopelle loading the bases. Although Rivera grounded out to third, an additional run came in before the side was retired. Regardless, Edgardo Villegas laid out to make a great catch while robbing Thompson of a hit in one of the few bright spots.

UM then got its first hit and first run.

Dominic Pitelli came through with an important two-out single right up the middle. After CJ Kayfus got beaned in his second at-bat Jacob Burke flared one to right with Thompson failing to field it cleanly. Pitelli wheeled his way around third and made it home getting Miami on the board 4-1.

It was the height of their offense.

Similarly, The U tried to get it going in the fifth.

Firstly, Pitelli and Kayfus drew back-to-back walks giving Burke a chance to plate some runs. Despite these advances, the Hurricanes were stopped. Burke nearly grounded into a double play reaching on a fielder’s choice. Yohandy Morales,meanwhile, popped out to center.

Turning the page to Tuesday. pic.twitter.com/pisyBR1SOF

All of a sudden first baseman Kendrick Calilao led off the sixth with a bomb to left field extending Florida’s lead 5-1 in a likely dagger to Miami’s hopes. Shortly after Florida struck again as Wyatt Langford doubled to left pushing across two more.

UM showed long overdue life in the ninth mounting a negligible rally bringing in deuces. Maxwell Romero Jr. then struck out with the bases loaded to end it.

In conclusion, it was definitely a frustrating series for the young guns. Miami knows where they’re at right now and it’s not a pleasant place. Where was the hunger? The heart? Will the real Hurricanes please stand up! Saturday’s loss carried over to Sunday and they looked so lost at the plate. The walks were utterly atrocious. There were a grand total of 23 walks issued. Comparatively, this matched their TOTAL on the season heading into this series.  They’re so better than this, however, I previously stated this was likely going to be their first stumble of the season but not like this. They didn’t stumble they fell through the floor.

EDDY!!!!!!! VILLEGAS FLASHES THE LEATHER ON A SINKING LINE DRIVE!

To sum up the Canes were outscored 21-9. Only the opener was any measure of a competitive game. Enough ranting, it’s time to turn the page and move on. Plenty of baseball to be played with UM starting ACC play next weekend versus Boston College.

No way. No, no, no. Definitely, NOBODY gets it.

The pitching staff stunk to high heaven with over 20 walks this weekend. Let that sink in.