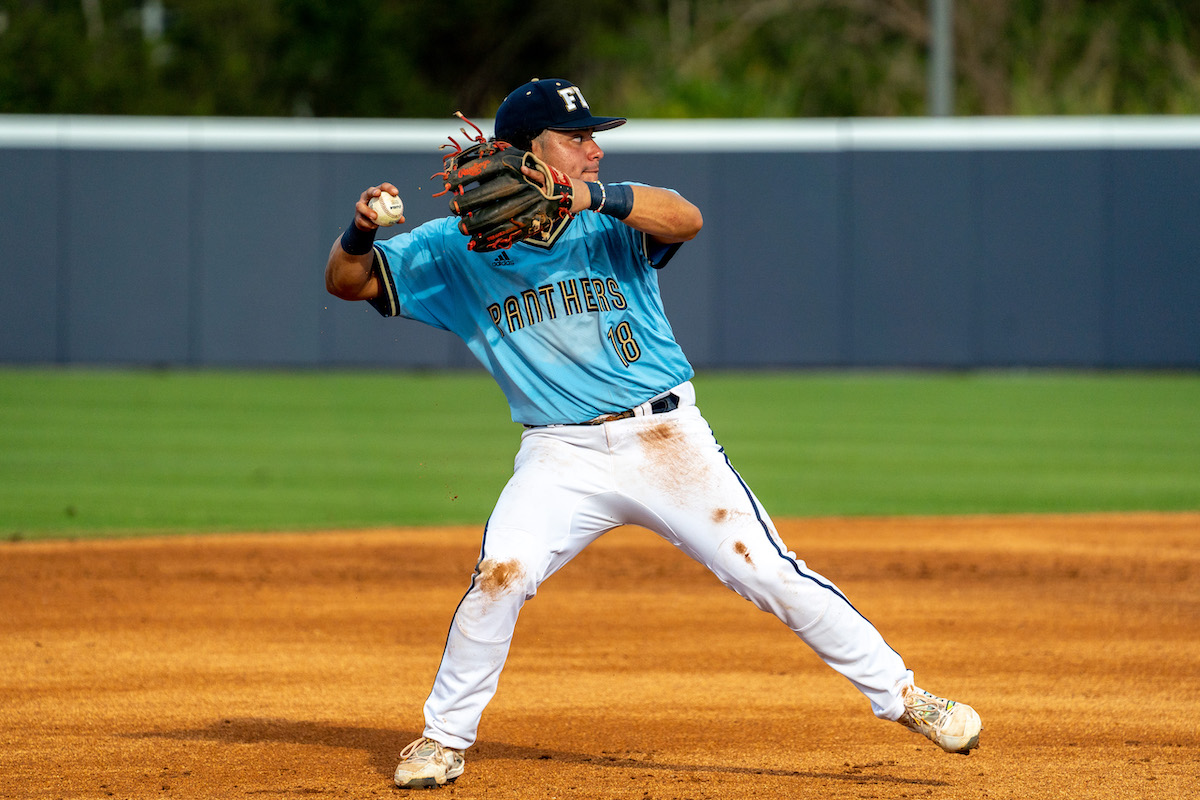 Miami, Florida – Casey Dana was a force at the plate hitting two doubles and a homer knocking in four runs for the UCONN Huskies winning 9-1 over the FIU Panthers. Florida International’s hitting was stifled by a very efficient Pat Gallagher. The freshman righty tossed a near-flawless seven innings giving up just one run punching out six hitters. Gallagher attacked the strike zone all night without issuing a single walk.

Kevin Martin, meanwhile, was yanked in the fourth unable to keep the visitors off the board. The blue and gold’s pitching was not up to the task with the offense finding no answers Saturday night. The win clinches the weekend series for the University of Connecticut.

Over at the FIU game tonight. Lovely evening to watch the Panthers (7-4) host the Huskies (6-1). Kevin Martin out on the mound for Florida International against UCONN's Pat Gallagher.#PawsUp #PantherPride pic.twitter.com/LvHboYqxEw

Taking a bite out of them

In the home half of the second Jayden Melendez struck out looking stranding a pair of runners in scoring position.

Huskies took the lead in the third.

Erik Stock hammered an RBI single into the outfield recording the first run of the evening. Dana struck his own RBI single advancing to second on the play, making it 2-0 Connecticut.

Martin found himself in a bigger pickle giving up a walk to load the bases with one gone. The righty got Ben Huber for the big second out but walked Christian Fedko widening the run deficit. The freshman escaped further damage forcing Matt Garbowski to pop out.

B3 | A Fig singles after Sanchez reaches via error. Two Panthers on with two outs.

FIU’s next trip to the plate saw another opportunity to get some runs back. After Gallagher retired the first two hitters, Alec Sanchez and Adrian Figueroa got on base setting up Dante Girardi. The sophomore lined one to the right side but Huber gloved the hit flipping it over to Gallagher for the shut down out. The senior would do the same to Matthew Gonzalez the following frame nabbing the liner for the unassisted double play.

UConn found no such problems in the fourth.

The Huskies doubled up on the Panthers scoring three runs on four hits knocking out Martin in the process. Richie Pena stepped in but the damage was irreversible. Dana struck again knocking the two-out, multi-RBI double extending the Huskies lead to 5-0. T.C. Simmons put the barrel on the ball slapping it into the gap in left-center field for another two-out RBI double.

Melendez blasted one in the fifth inning putting the Panthers on the board. It was a largely pyrrhic gesture. Dana hit the scoreboard with a solo shot in the ninth for the icing on the cake. Florida International showed some life at the end loading the bases only to see Bryan Loriga strikeout looking.

FIU sent out their best on Friday and it showed with the available arms unable to contain the Huskies. The Panthers banged nine hits with little to show for it unable to get those clutch moments. Gonzalez was the only player in the entire lineup with more than one. Ouch. UCONN already clinched the series and stand ready to sweep the boys right out of the ballpark on Sunday. After a promising start, the team is now 7-5 on a four-game losing skid. UM is on the horizon in the Battle for the 305 on Tuesday.

In a loss like this, it’s pretty tough to hand one of these out. It’s going to Jayden Melendez.

Lots of blame to go around. If I had to choose one guy it’s Loriga. Bases loaded and you blew it in the ninth. They were down eight yes, however, those kinds of opportunities can’t be squandered no matter the score.