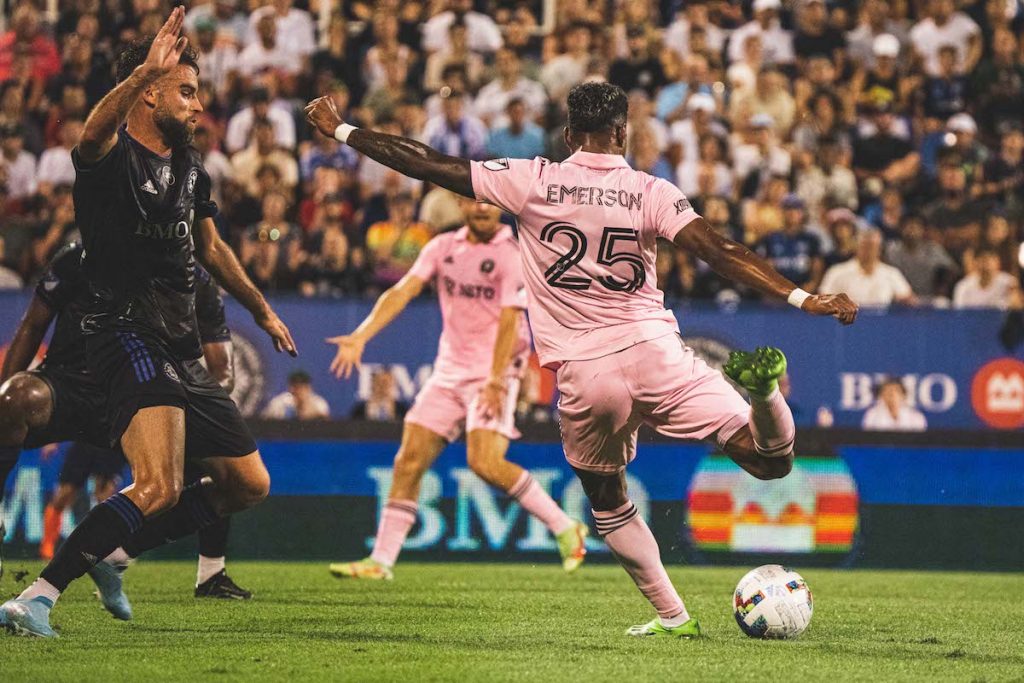 Montreal, Canada – Inter Miami CF battled to a 2-2 draw with CF Montreal Saturday night at Stade Saputo. The Herons snatched a huge point from a talented and physical squad. Gonzalo Higuain along with Emerson Rodriguez scored the clutch goals for Miami.

A surprising Starting XI for the Herons saw Ryan Sailor and Aime Mabika pair up at the center-back position, with Bryce Duke getting the start in the midfield. The young Herons did not disappoint, with each playing well against Montreal.

Romell Quioto started the fireworks early for Montreal with a goal off a Samuel Piette cross at the 5’ minute. Quioto redirected the Piette cross subtly past Drake Callender. 1-0 Montreal.

A minute later, a fantastic sequence between Bryce Duke, Alejandro Pozuelo, and Gonzalo Higuain led to the tying goal by Higuain. Duke initiates the play with a cheeky nutmeg of a Montreal defender and feeds the ball forward to Pozuelo. The “Maestro” places a precise pass to Higuain, who gives the ball a love tap over the charging goalkeeper. A Golazo worthy of the top leagues in the world. 1-1.

Chris Mcvey, who had his worst game of the season was called for a handball on a cross into the box. Quioto put the penalty kick past a diving Callender at the 21’ minute. Drake guessed correctly, but the ball just went under him into the goal. 2-1 Montreal.

The teams go into the half with Montreal leading 2-1.

The second half continued with Montreal bombarding the Inter Miami area with crosses into the box. Montreal had chances to expand the lead, but a gallant Callender made big saves for Miami.

McVey having a rough game in Montreal ..he’s been one of the best and most consistent players for the Herons this season @InterMiamiCF @LemonCityLive @MLS https://t.co/PYXhPBkAKH

Phil Neville used all his substitutions in an effort to provide fresh legs and revert the score. Emerson Rodriguez, who had a rough game against San Jose would vindicate himself with the game-tying goal at the 79’ minute. Joevin Jones dished out a brilliant pass into space for Emerson, who used his speed to get into the box and shoot at the goal.

Emerson’s initial attempt was blocked by the keeper, on the rebound, a sliding defender blocked his second attempt with both falling to the ground. Rodriguez gets back up quick as lightning and shoots it past the charging goalkeeper. Not a pretty goal, but beautiful nonetheless for the Herons. 2-2 draw.

The Herons would hold on and bring a Huge point home from a tough venue and against a contending team.

Emerson Rodríguez with the finish to tie it up once again!#MTLvMIA | 2-2 pic.twitter.com/yJISwRXUuL

A proud Phil Neville spoke glowingly of his team’s effort against a strong Montreal team. The Herons played a courageous game after traveling cross country twice to play two matches within four days.

“The players, I thought, performed a miracle tonight. In terms of their effort, their spirit, their togetherness.”

The draw in Montreal I will state once again was Ginormous. The team played with heart and grinded out a positive result. The effort the team showed on this road trip can only strengthen the belief they have in each other. I don’t know if the Herons will make the playoffs; I’m betting they will, but culture is being created and a foundation is being laid.

Phil Neville and Inter Miami CF continue on with the roller coaster ride that this season has been. After gaining four points on a brutal road trip, the team is trending up again. The effort, spirit, and togetherness Phil spoke about has this team believing in each other. A team with hope, and an unbreakable spirit is a dangerous team.

Ryan Sailor had his worst game of the season against Cincinnati FC and did not start the next game against San Jose Earthquakes. Sailor got the start along with Mabika versus Montreal on the road. The task was not an easy one, but Ryan responded marvelously. Sailor demonstrated the grit, and spirit that he and this team possess. The Herons have a good young center-back.

I have said since very early in the season that Bryce Duke was a special player. Early glimpses of his talent convinced me that he could eventually be a difference maker for Miami. He is a difference maker now. Neville has to find a way to keep Duke on the pitch, his level of play has earned him that.

The beautiful thing about playing futbol is that the game always gives you opportunities to redeem yourself. Last game Emerson Rodriguez was the villain, and against Montreal, he was the hero. I, like Phil, have a lot of faith in the young player. He has a big upside and vast potential. I hope he continues to mature and develop so he can demonstrate his full capabilities. If he does, many will be left with their mouths open.

NYCFC and Toronto FC are the next two matches for the Herons. DRV Pink Stadium should be rocking for these two games, Miami needs the points at home.