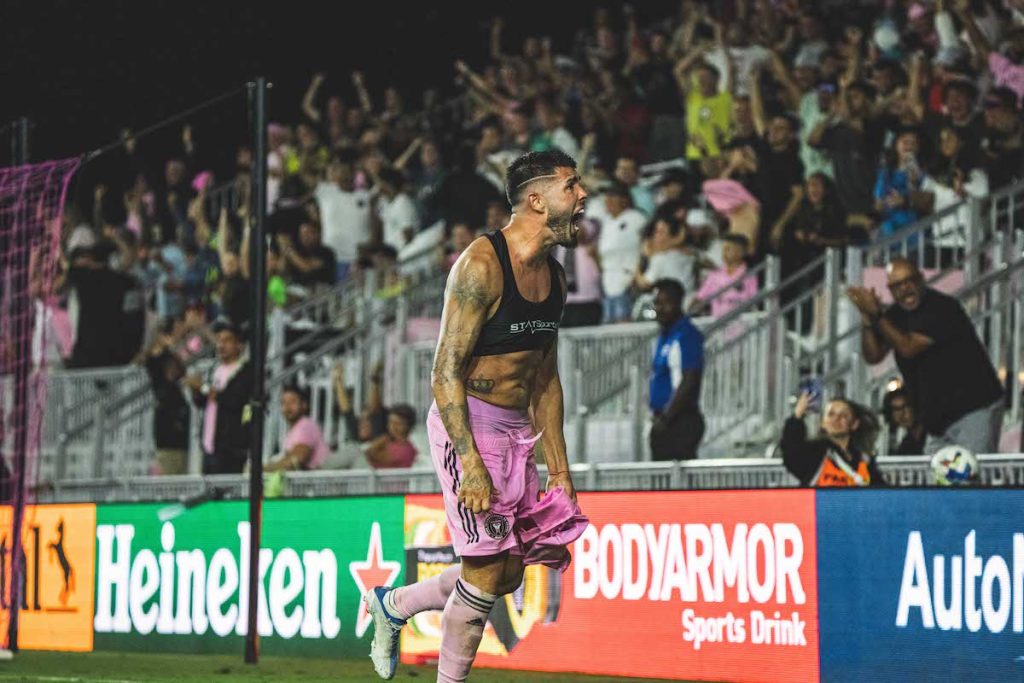 Ft. Lauderdale – Inter Miami CF netted a 3-2 comeback win over NYCFC at DRV PNK Stadium on Saturday night. Ariel Lassiter and Alejandro Pozuelo scored for Inter Miami, leading the team to their first-ever defeat of the Pigeons. The thrilling win put the Herons above the playoff line, catapulting them into seventh place in the Eastern Conference.

The first half had Inter Miami start strong, with possession and shots on goal. It would be NYCFC that would get on the board first at the 33′ minute. A cross by Maxi Moralez off a set piece was headed by Maxime Chanot towards Talles Magno, who drilled it off the far post into the back of the Heron goal. 0-1 NY.

The Herons responded quickly with Alejandro Pozuelo scoring his first goal for Inter Miami at the 38′ minute. A combination of touches between Pozuelo and Bryce Duke had Bryce serve a subtle pass that Alejandro curled beautifully past goalkeeper Sean Johnson. 1-1.

The set up by Duke and the finish by Pozuelo, a beautiful sight to see🤩🫶#MIAvNYC | 1-1 pic.twitter.com/0wba5fl1xc

NYCFC would take the lead just before halftime with a pinball-like goal in stoppage time. The Heron defense scrambled to clear a ball in the box, but it just kept bouncing around until Thiago Andrade blasted it past Drake Callender. 2-1 NY.

The Heron players along with Coach Neville were fuming at the referee for allowing over two minutes of stoppage time after one minute was indicated.

Early in the second half at the 54′ minute mark, coach Neville made three substitutions at once. Duke, Taylor, and Gibbs, came off for Lassiter, Vassilev, and Sailor. The moves would pay dividends quickly.

Ariel Lassiter would rifle a shot into the NY net to tie the game at 2-2 at the 63′ minute. A weird sequence had the NY players protesting that Miami did not kick the ball out of bounds while two players were on the ground. Jean Mota continued the play with a cross into the box, Pozuelo flicked it with his head to Higuain, who served the pass to Lassiter on a platter.

63' – Gonzalo Higuaín to Ari Lassiter for the equalizer 👏#MIAvNYC | 2-2 pic.twitter.com/KxVfkxuGWG

Alejandro Pozuelo scored the game-winning goal for Miami at the 84′ minute off a gift from NY’s Alfredo Morales.  The weak pass by Morales towards his goalie was intercepted by Pozuelo, who calmly and brilliantly put the shot past Johnson for the final 3-2 score.

Put it on repeat🔁 pic.twitter.com/tXCKthi5CB

Phil Neville was “super proud” of his team, and rightfully so. The Herons had once again come from behind to win at home, this time against the defending champions. The catalyst on this night was Alejandro Pozuelo, and the coach had high praise for the Spaniard,

“He’s a game changer for us, who makes plays, who creates things, who was the best player on the pitch I thought.”

Alejandro Pozuelo has fit in perfectly with this team. Early in the campaign, Neville talked about the jigsaw puzzle coming together during the season. Henderson and Neville found the piece that put the puzzle together in Pozuelo. This is a vastly different team with Pozuelo on the pitch. The quality and calmness he provides is contagious and is evident with the improved play for Miami. Alejandro has been a season changer for Miami.

I’ve written that a team with hope and an unbreakable spirit is a dangerous team. Inter Miami CF is a dangerous squad right now for any team in this league. The Herons’ confidence continues to grow with each positive result they net. If Miami makes it into the playoffs, it could be an interesting run. Way before it became popular, I said the Herons would make the playoffs. I stand by that vision, and I stand with my notion that they can do damage in the playoffs.

Alejandro Pozuelo is a “Maestro” with so much class on the pitch, he’s raising the standard of play for the Herons. Gonzalo Higuain and Bryce Duke have flourished with his arrival to the team. Higuain has enjoyed being served brilliant passes to finish, and Duke is learning the nuances of being a class midfielder.

What a difference maker this man has been for Miami.. baby godfather Chris Henderson take a bow @19Hendy19 @InterMiamiCF @LemonCityLive @MLS https://t.co/ii3kTNbf8P

Bryce Duke has made a gigantic leap this season as a player. The evident talent has come into fruition, and he has maintained a consistently high level of play. This breakout season could only be the beginning of many wonderful opportunities for the young talent.

Gregore is so important for the dynamics of this team. He is asked to help in the build-up of play and is also the main extinguisher of opposing teams’ advances. He truly is playing like one of the better midfielders in the league but doesn’t get enough credit. If he can manage to control the number of bookings he receives, Inter Miami would benefit immensely.

Phil Neville is the captain of this ship, and early on when the ship seemed to be sinking he received heavy criticism. At this point in time his team sits in a playoff spot, a feat very few of us thought possible. That deserves some credit. Say what you will about the man, but in my opinion, he has earned the right to be back next season already.

The roller coaster ride continues with unexpected twists and turns. Miami is ascending, and we are going to find out how high and how long they will continue to climb. Brace yourselves, anything is possible with this squad.