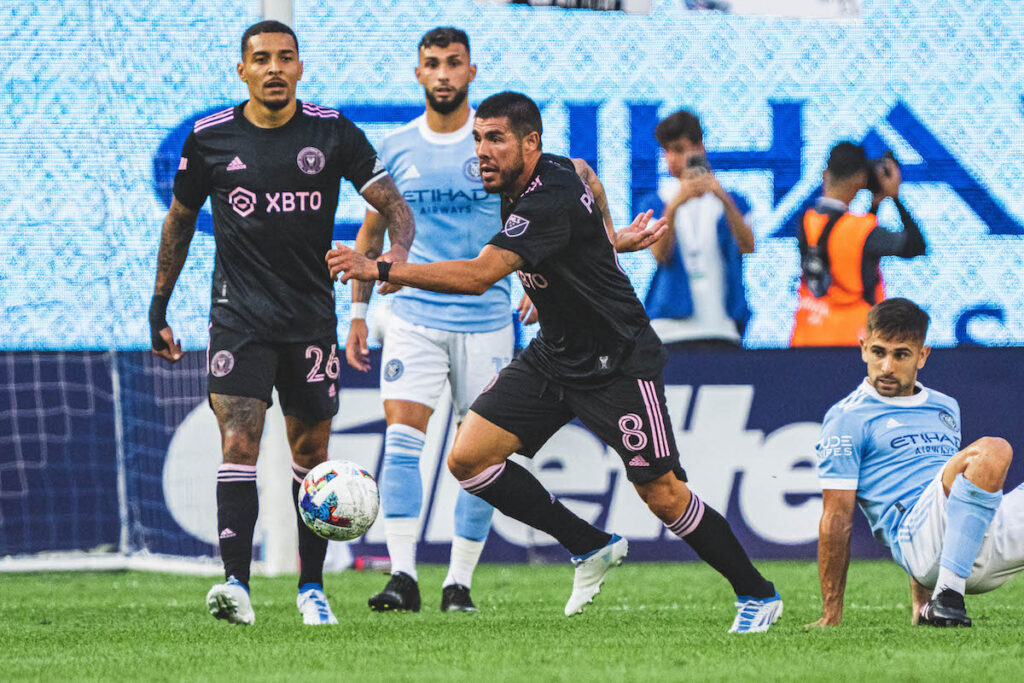 The Starting XI had two changes from the previous match against Charlotte FC. Gonzalo Higuain started in place of the injured Leonardo Campana and Kieran Gibbs got the start at left back. Chris Mcvey slid to center back for Damion Lowe who was suspended for an accumulation of yellow cards.

NYC has not lost at home in their last ten games ..nice night for that streak to end.. Higuaín & Pozuelo need quality performances for that to happen @LemonCityLive @MLS @InterHeron @InterMiamiCF

NYCFC began the game dictating the flow of play, while  Inter Miami was chasing the ball. Maxi Moralez fired a laser shot through Drake Callender’s legs at the 12’ minute for the early 1-0 lead for New York. In sequence just before the score, Alejandro Pozuelo stopped on a play, thinking a foul would be called in his favor by referee Allen Chapman. Pozuelo was pulled back and clipped slightly on his leg by Santi Rodriguez, but the play was allowed to continue.

After the NYC goal, the Herons began to take possession of the ball, creating some chances on goal, but goalkeeper Sean Johnson did a marvelous job of extinguishing each attempt.

Héber slid in to clean up a sloppy cross in the box to score the Pigeon’s second goal at the 75’ minute. NYCFC led 2-0 and effectively iced the game, the final score would be 2-0.

Phil Neville looked visibly upset at the postgame press conference, it probably had much to do with some of the referee’s decisions. One of Neville’s phrases that stuck to me was,

“I thought we competed in the game.”

The Herons lost 2-0 against the defending MLS champs on the road, in a venue where NYCFC had not lost in their previous ten matches. Before the game, I said that if Miami brought a point home from New York I would be satisfied. Despite being down four starters due to injuries or suspensions the Herons grinded the whole match.

Bryce Duke, Damion Lowe, Ariel Lassiter, and Leonardo Campana are customary starters for this team, and they were sorely missed. Kieran Gibbs did a good job at left-back while Gonzalo Higuain was not much of a factor. The team did compete, but at this point in the season every point matters, and competing is not enough.

After a grand debut against Charlotte FC, Alejandro Pozuelo fell off a cliff against NYCFC. Pozuelo was invisible for long stretches of the match and had some fault in conceding the first goal by New York City FC. After apparently being fouled, he stopped battling for the ball believing the referee would make the call. A seasoned veteran like him knows better than to give up on a play or simply stop unless the referee blows the whistle. This is taught to the youngsters, don’t stop until you hear the whistle. The Herons need a consistently high-quality level of play from Pozuelo along with relentless effort. Let’s see what they get from his next game.

Gonzalo Higuain started the game for Miami and in general terms was adequate. The problem is that the third highest-paid player in the league needs to be a game changer. Higuain, as I have said since very early in the season, is best suited as a super-sub who plays 15-30 minutes a match. He does look like he is in better shape and could last 45’ minutes, but not much more.

The team is in dire need of a goal scorer who can consistently get the team on the board. Leonardo Campana’s injury is a concern because this team doesn’t have many options to score. Corentin Jean is in town and might be available soon. Shaan Hundal was available, but Neville has not given him an opportunity yet. Hundal has shown interesting characteristics and hopefully gets a chance to play some minutes.

Injuries and suspensions continue to affect this team, when this occurs it’s the next man up. Miami played a tough, gritty game but they need a healthy team to make a playoff push.

Alejandro Pozuelo is a good player, but I hope Phil does not simply hand him the starting spot in the midfield. Bryce Duke has been a brilliant revelation for the Herons and Phil Neville needs to start the player that is performing the best on the pitch.

The roller coaster season continues for Miami, and on Saturday night against Cincinnati, the three points are a must.

Keep in mind…9 of #InterMiamiCF's 12 remaining games are against teams in this mix or lower than them in the table. https://t.co/hyJWVEUqa2