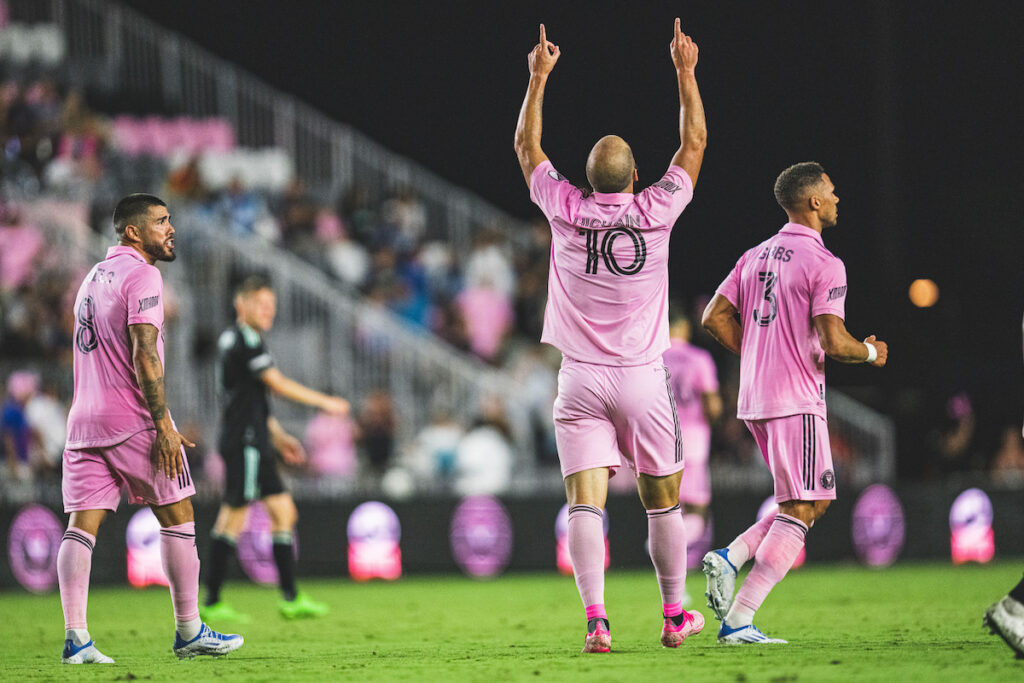 Fort Lauderdale, FL – In a mesmerizing match at DRV PNK Stadium, Inter Miami CF defeated Charlotte FC 3-2 Saturday night. The Herons came back from an 0-2 deficit at the half with scores from Robert Taylor, Gonzalo Higuain, and Emerson Rodriguez.

The Starting XI had three modifications from the previous game against Philadelphia Union. Alejandro Pozuelo, Ryan Sailor, and Indiana Vassilev got the start against Charlotte.

In a blink of an eye, Charlotte FC was winning the match 0-1. An errant pass by Jean Mota led to a short counter-attack and a lightning-quick goal by Yordi Reyna. Twenty-six seconds into the game Inter Miami was already in a hole. Reyna was a headache for the Heron defense in the first half.

Goalie didn't even have time to blink it happened so fast! pic.twitter.com/vuOEX7lCMq

Damion Lowe was booked a yellow card at the 12’ minute after a hard foul from behind on Quinn Mcneill. Lowe was fortunate he did not receive a straight red from the sloppy challenge.

Alejandro Pozuelo put on a show early on in his debut displaying exquisite touch and ball control.  El “Maestro” caresses the ball while hiding it in plain sight of defenders.

The Herons began to take control of the action, but it was Charlotte that got on the scoreboard again via a Yordi Reyna Golazo at the 42’ minute of the first half. Reyna curved his shot over and around a diving drake Callender, who could only watch the ball enter for the 0-2 Charlotte lead.

Man, this weather delay must've done something to him 😂 pic.twitter.com/JeRH89Iv45

Despite outplaying their opponents for most of the first half, the Herons went into halftime down 0-2.

Robert Taylor scored a dream GOLAZO for Inter Miami at the 59’ minute.  Out on the right wing, Taylor did a “sombrero” over a charging Charlotte defender, then dribbled into the box leaving defenders behind, and fired a torpedo into the corner of the Charlotte goal. Poetry in motion.

Phil Neville brought in Gonzalo Higuain and Bryce Duke for Leonardo Campana and Indiana Vassilev. These substitutions would be monumental to the Miami comeback. Higuain, Duke, Pozuelo, Mota, and Gregore seized the ball and the game away from Charlotte.

Higuain would tie the game at the 71’ minute with a surgical strike past goalie Kristijan Kahlina. Gregore provided a subtly chipped ball into the box for Gonzalo, who brought it down and banged it into the back of the net. There are still moments of brilliance left for Higuain and his fútbol boots.

🤩🤩🤩🤩@InterMiamiCF is back in the game! #Higuain #Golazo #LaFamilia

The crowd was frantic, and the team kept pushing for the winning goal. Charlotte was on its heels, like a battered boxer that is about to be knocked out. Then the final punch came.

Bryce Duke slipped a ball into the box for Emerson Rodriguez, who controlled and blasted the ball past Kahlina for the GOOOOL and knockout blow.  The two youngsters teamed up for one of the most important goals in the team’s brief history. Inter Miami CF held on to defeat Charlotte 3-2.

From down 2-0 at halftime. @InterMiamiCF takes all three points with extra time winner! . #InterMiamiCF | #MLS | #LaFamilia

Phil Neville addressed the media in a late-night press conference after the team’s emotional 3-2 come from behind victory against Charlotte FC.

“I thought it was the best performance of the season,” said Neville.

The dramatic victory Saturday night will have lasting repercussions for the rest of this season. The team was able to turn on a switch and take their fútbol to another level in the second half, a level we have not seen with Inter Miami.

The comeback was amazing and thrilling, but not the best performance of the season in my opinion. The team did not put together a complete performance, and I think that the 2-0 victory at home against the NY Redbulls was more impressive.

I agree with Phil that the Charlotte game showed the best Inter Miami team all season, but that was only in the second half and when Higuain, Duke, Pozuelo, Gregore, and Mota teamed up. The Herons need to put up a complete game from start to finish, and they have not done thus far.

“We trust these players.”

Head Coach Phil Neville talks about the culture that the team has created and their determination throughout every match they compete in. pic.twitter.com/4i1C5AsDBV

Phil Neville and Gonzalo Higuain keep providing glimmers of brilliance during this roller-coaster season. Phil and Gonzalo are arguably the two most criticized people on this team. Saturday night they once again showed they are capable and maybe better at their jobs than many believe.

Neville substituted defender Damion Lowe out at the half and brought Kieran Gibbs in. Mcvey was placed at center-back with Gibbs manning the left-back role. The moves paid off because both players came through with solid games. Phil also took out the team’s leading scorer Leonardo Campana in a crucial moment of the game. Gonzalo Higuain and Bryce Duke completely changed the game for Miami. Gonzalo scored and was part of the fútbol symphony that won the match.

The Herons are making history this season, and they’re not done yet..there’s something brewing with this team @InterMiamiCF @InterHeron @MLS @LemonCityLive https://t.co/ASMPJOa7gC

Chris Henderson is the “Baby Godfather” of Miami, and Pat Riley is still number one. Bringing in Pozuelo was a master chess move by Chris. A player like Pozuelo not only influences the outcome on the pitch, but he provides much more. The confidence level of the midfield was elevated by Alejandro’s quality and presence. It was evident that other players wanted to be as elegant with the ball, and were more willing to touch the ball around Charlotte FC.

Robert Taylor is always steady. He plays the game hard and is consistently at a good level. The thing with Robert is that out of nowhere he explodes with an amazing play, like his fantastic goal Saturday night.

Emerson Rodriguez finally scored his first MLS goal with the Inter Miami CF first team. What a moment to score his first goal! Rodriguez was another smart move by Neville, bringing him on very late to try and get a miracle. The miracle happened and the Herons won 3-2. Could there be more miracles this season? I have a feeling there could be.