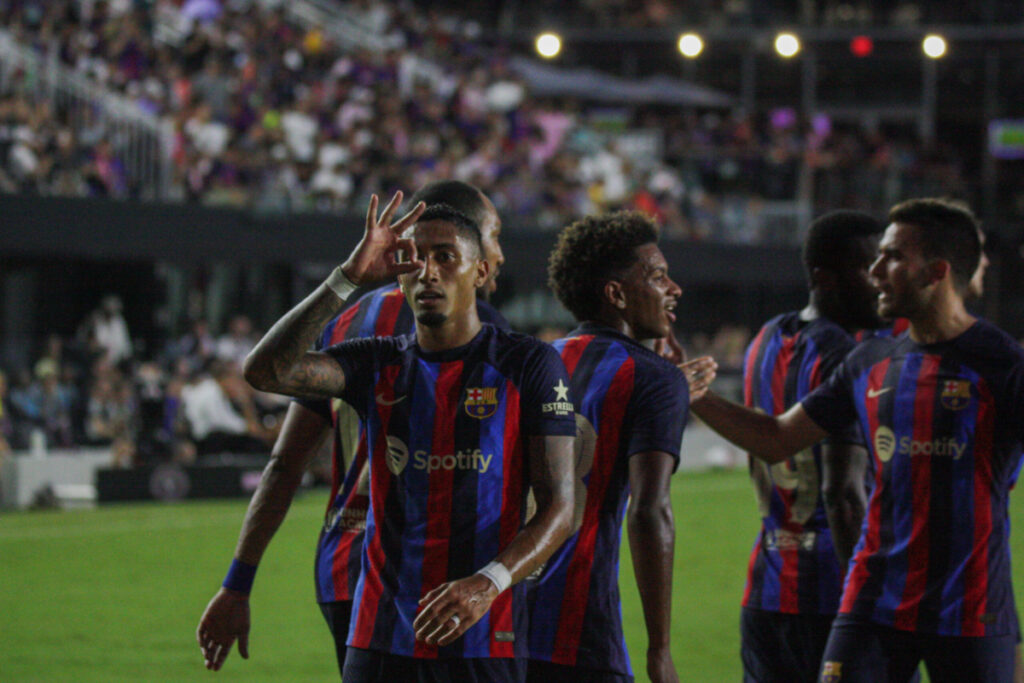 Ft. Lauderdale, FL – Inter Miami FC and FC Barcelona are entering two new eras, no cap. The beginning of Inter Miami’s MLS story is still being written. While we’re years removed from Beckham announcing his intentions to bring a team to Miami, now, in only its 3rd season, the club is still in its infancy. And, to date, this will be the most high-profile match they will have played, or will play in the foreseeable future.

After a long back and forth with Bayern Munich, @lewy_official finally signs w/ @FCBarcelona.
His first ever training session with the team took place right here at @DRVPNKStadium before a friendly vs @InterMiamiCF. @onaPSIh will have your post-game reactions. pic.twitter.com/zOGFW10K1C

Meanwhile, Barça is starting from scratch. It’s a post-Messi world, and for Barça fans all over the world, the beginning of it seemed more post-apocalyptic than anything else. Former club president, Josep Maria Bartomeu left the club in financial shambles. Sandro Rosell began that process before him. We remember the Neymar misappropriation-of-funds saga that saw his resignation.

That was back in 2014. Fast forward to 2017 and Neymar is leaving the club to play for PSG. Following Neymar’s departure, Barça’s President at the time, Josep Maria Bartomeu decided to handle that loss the way rich people solve any problem. They throw money at it! Gone were the days of relying on homegrown talent.

The club’s golden age was due to its once-in-a-generation class of footballers that played the game in that true Barça identity, gifted to them by Johan Cruyff. That’s what Joan Laporta and Presidents before him understood. Now, Laporta, back at the helm of the club is relying on young talent once again.

Of course, the arrival of Ronaldinho added that extra spark that allowed the club to transcend from a powerhouse club to arguably the best club in the world. Then, to top it all off, coming up from La Masia was a fellow by the name of Leo Messi who would go on to become the greatest of all time in some people’s eyes. However, none of that success is possible without the culture that Barça built throughout the years. Laporta is returning to those roots but hasn’t forgotten to bring that exceptional piece.

In like manner, Miami, entering their first season in 2020, resembled Bartomeu after losing Neymar. Then Sporting Director, Paul McDonough made Gonzalo Higuain the highest-paid player in the MLS. They overpaid for Blaise Matuidi and even broke some financial regulations to make that happen. Miami received a $2 million fine for that and he’s not even with the team anymore. They also underreported the salary budget amounts for a number of other players. Ouch.

Since then, Miami hired Chris Henderson to class up the joint. Some notable additions to the club have been Leonardo Campana and DeAndre Yedlin at the beginning of 2022, and most recently, Alejandro Pozuelo, the 2020 MLS MVP. Campana comes on loan from English Premier League club, Wolverhampton Wanderers. He’s scored eight scored so far this season, good for the 16th best in the league. Miami should do what they can to lock him up. Yedlin signed a four-year contract with Miami. He was named a 2022 MLS All-Star. Pozuelo came over on a trade from Toronto. Miami expects him to be the organizer of the offense so that Campana can focus on finishing.

Miami’s also got their youngsters on the squad. Indiana Vassilev joined on loan from Aston Villa last season and was re-loaned this season. The staff really like him. He’s hit some game-winners and, at times, seems like the only guy out there making plays. We’ve also got Emerson Rodriguez. The Colombian was brought over from Millionarios in Colombia. He’s a rocket but is equally exciting and frustrating to watch. As soon as he improves his decision-making, watch out, MLS. Last, but not least, you guys asked for Beckham, and he suited up! Not what you think, though. Romeo James Beckham may not be as skilled as his dad, but he’s got the same neck tattoo. And, at 19 years old, he’s got a lot of room for growth. His dad had some epic battles against Barcelona. Maybe one day he’ll get another opportunity.

Barça’s future was on full display (maybe 80%) Tuesday night at DRV PNK Stadium. Their young studs, barely two steps out of youth tournaments, but already veteran enough to have experienced a Clasico win (4-0) over Real Madrid, showed out in front of a sold-out, evenly-split fanbase. Ansu Fati, Barça’s new #10, looking healthy as ever showed why they chose to bless him with that number on his jersey. Pedri arguably has become the team’s most important player, and the defending Kopa Trophy recipient, awarded to the best performing player in the world under the age of 21. And, last but not least, Gavi, the youngest of them all opened up the scoring in the 2nd half with a scorcher from outside the 18. The kid was a workhorse for Barcelona last season and he isn’t afraid to mix it up with anyone.

📢GOAL!@FCBarcelona’s new #10, Ansu Fati one-touched a shot off a bounce right past Marsman.
At the half, Barça leads @InterMiamiCF 3-0.#MIAvFCB pic.twitter.com/c7td3d0njO

As far as new signings, you might’ve heard of Raphinha. After playing two seasons at Leeds United, the Brazilian National Team player signed a new 5-year, $60 million contract. He got to work quickly, scoring in his Barça debut against Miami. The bigger signing was that of Robert Lewandowski. We got to see him in pregame workouts, his first with the team, but he wasn’t made available for the match. Many speculate that Lewandowski would’ve won the 2020 Ballon d’Or if it wasn’t for the pandemic forcing the cancelation of the awards event.

Not Quite Mirrored Images

As I mentioned, the similarities don’t end at Yedlin and Sergiño Dest both reppin’ the USMNT. However, these are two distinctly different clubs with stark similarities. One is full of rich history and the other is just getting started. Barça ended up defeating Miami 6-0, to no one’s surprise. The match saw Memphis Depay and Ousmane Dembele convert the cheekiest goals of the match. Total class and those guys might be coming off the bench for Barcelona. Scary to think about.

US Tour 🇺🇸 Miami it was real!
Off to Vegas now! ✈️

Btw How should we call this turn trick 🤔 #respectfully pic.twitter.com/o7oAYl7l8y

Nevertheless, I’m very excited to see how Inter Miami will grow and build upon this season’s great signings. Chris Henderson is doing great things and while I don’t expect as quick a turnaround as Barcelona was able to pull off, I do expect Miami to eventually continue in this trend and become an MLS powerhouse.