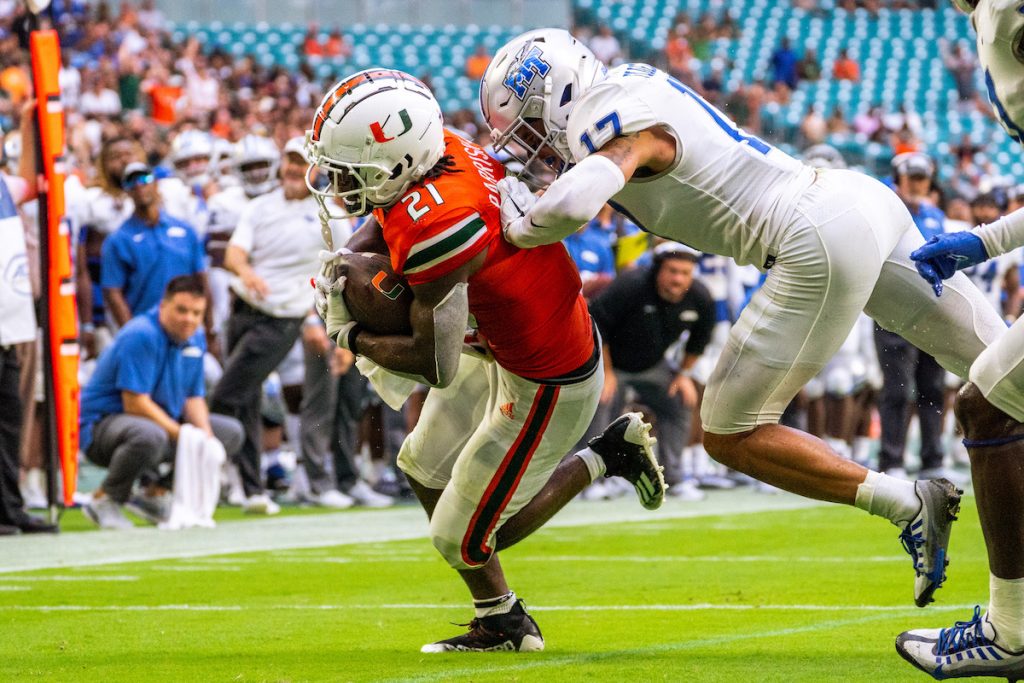 Miami, Florida – In the span of two quarters, the hype was destroyed as Tyler Van Dyke saw the bench and the Hurricanes fell to Middle Tennessee 45-31. Not even the debut of Jake Garcia could save them. Heavily favored to win, UM was outplayed from start to finish down 24-3 at one point. The Blue Raiders came to South Florida hoping to knock off the strongest opponent in their schedule and succeeded.

During their opening series, it was 4th and 1 on Miami’s 48-yard line. Rather than punt, they went for it. This was a challenge. However, one The U did not answer. Miami’s defense failed to stop the big plays and the offense dug itself a huge hole with costly turnovers. In contrast, Garcia’s appearance in the second half was a shot in the arm for players and fans alike. Despite this, the Blue Raiders kept on attacking.

Impressions:
– Van Dyke has been terrible this game. 2 INTS. 13 of 25 pass attempts for 114 yards and 1 TD.
– UM has 3 turnovers (2 INTs, 1 fumble)
– Canes been outdone by MTSU in nearly all aspects#GoCanes #ItsAllAboutTheU pic.twitter.com/QIC8rcvUfg

The first half was as ugly as the weather. Van Dyke’s first pass of the day was intercepted by Decorian Patterson resulting in a 28-yard field goal. His second pass of the game resulted in another interception. Zaylin Wood took it to the house for the 15-yard score. Things got worse. Jaylan Knighton fumbled on UM’s third drive making it three turnovers in seven minutes of play.

Check out some of the biggest plays by the Blue Raider defense in Miami. #BLUEnited | #EATT pic.twitter.com/7KC1JyaAvr

Fortunately for the Hurricanes, Kamren Kinchens regained possession picking off Chase Cunningham on the first throw of the series. Settling in the Blue Raiders’ offense shined late in the first quarter. Cunningham found DJ England Chisholm for the 71-yard touchdown. Chisholm finished the day with a pair of catches for 169 yards, both were TDs.

Van Dyke, meanwhile, struggled on completing his own passes. On 4th and 4 on the Blue Raiders’ 6-yard line, his throw to Will Mallory was way too high. TVD was beset by inaccuracy. Sometimes he overthrew his receivers, other times he stared at them for too long. His pass to Michael Redding III late in the half on the MTSU 6 was frustratingly off target. Luckily Henry Parrish Jr. finished the effort with a 6-yard touchdown reception.
Although, it wasn’t all his fault. Redding dropped a pass that resulted in a fourth-down punt to start the second half.

Van Dyke’s struggles continued. Coach Mario Cristobal benched the starter in favor of Jake Garcia. The backup QB made his presence known firstly with the 23-yard completion to Mallory followed by the 39-yard bomb to Key’Shawn Smith. The Canes scored via the run game thanks to a 1-yard rushing TD by Thad Franklin Jr.

Sparked by their new quarterback the defense shut down the Blue Raiders with two critical sacks forcing a three-and-out.
Miami’s late third-quarter drive stayed alive due to two pass interference calls and an overturning of a fumble by Mallory. However, the rally dried up at the one-yard line. Garcia’s pass to the tight end was incomplete allowing MTSU to take over at their own one. Even if he caught it, Will wouldn’t have crossed the line. If that weren’t enough Cunningham went deep with Chisholm for the 99 (officially 98) yard touchdown. Down 38-17, Key’Shawn turned on the afterburners and took it to the house for a 91-yard kickoff return bringing Miami closer. Both teams traded one more set of scores with Middle Tennessee keeping its lead.

So that happened. Earlier in the week, I was asked what would it take for Van Dyke to lose his starting job. I said three interceptions and no touchdowns. Although not as catastrophic he only completed half his passes (16 of 32) for 138 yards, getting a TD while being picked off twice. Still pretty bad. The Blue Raiders were not afraid of this team and showed it. I had this squad finishing 10-2. After today? You can throw that right out the window. The same problems that have plagued the program continue.

The University of Miami paid Middle Tennessee $1.5 million to play them at Miami Gardens today.

Revisiting this week’s preview, aside from how disappointing Van Dyke has been we saw very little of Elijiah Arroyo and Redding’s impact was severely limited. Equally important, only three positives were Andres Borregales hitting all four extra point attempts and the 39-yard field goal, Smith’s kick returns (seven for 217 yards and 1 TD), and Kinchens’ INT.

The Highlight Of The Game For Me, My Baby Boy 92 Yards Return! With Heart And Kisses At The End! #GoCanes 🙌🏾 pic.twitter.com/OxhgMgGHD6

Furthermore, I see Garcia with cautious optimism. He completed 10 of 19 passes for 169 yards, that’s something. Soon, we’ll see if the Van Dyke show has been canceled and whether Garcia can find success under Josh Gattis’ offense.

Between the injuries and inconsistent performances, the Miami Hurricanes can easily finish 8-4, even 7-5. Look at these past four weeks and now look at what’s ahead. I’m not encouraged, are you? Fortunately, the Canes have the bye week to view the tape, make further corrections and really look deep into themselves. Regardless, the painful truth is there’s no quick fix for what ails the team and it’s going to take Mario Cristobal quite a bit of time to right the ship. If ever.