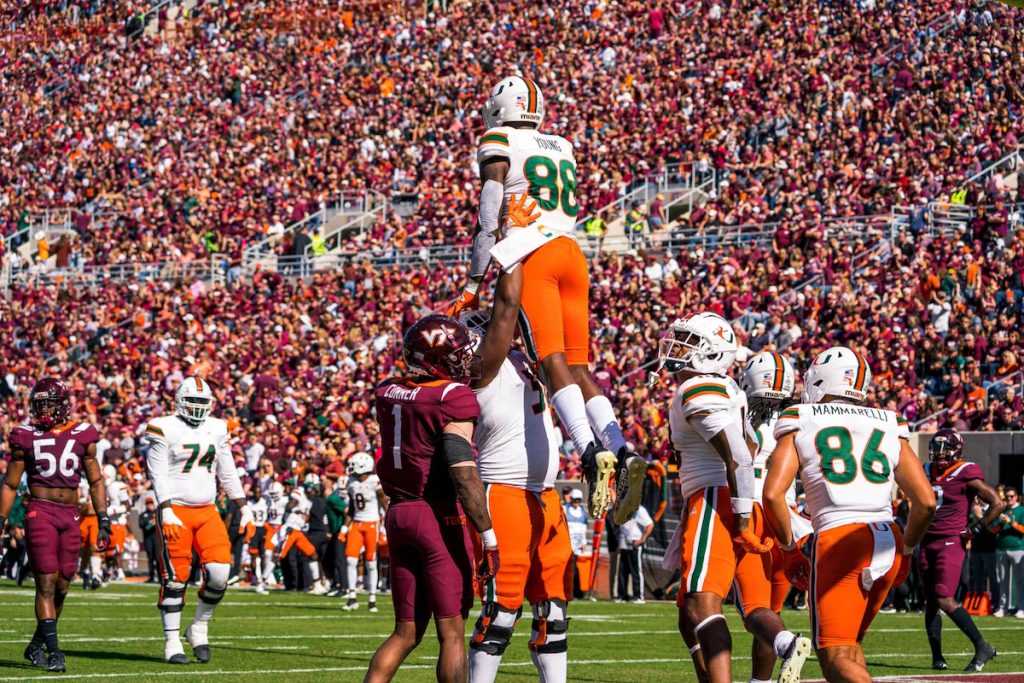 Miami, Florida – The Miami Hurricanes won their first road game of the season outlasting Virginia Tech 20-14, spoiling the Hokies’ homecoming. The win ends the Canes’ three-game losing streak and it’s also their first victory in conference play. Miami manufactured 458 total yards including 351 in the air. Tyler Van Dyke completed 29 of 46 passes recording two touchdowns. Colbie Young has risen up leading the wide receivers with nine catches for 110 yards including a TD. Brashard Smith also had his best game of the season collecting six catches for 76 yards.

The defense dominated the Hokies keeping them scoreless until the fourth quarter. DJ Ivey forced the game’s only turnover, allowing the Hurricanes to pounce with a touchdown, giving them an early lead they never relinquished. Grant Wells was sacked six times and the Hokies’ running game was held to just 78 yards.

TVD connects with @_FrankLadson for six 💪

Virginia Tech’s promising opening drive was cut short when Dae’Quan Wright fumbled after making a 27-yard catch. Miami’s Avantae Williams recovered the football. TVD made two big throws, one to Smith for 30-yards and then a 37-yard play to Young setting up the 5-yard TD throw to Frank Ladson Jr. Late in the second quarter Van Dyke found Young again, this time for the 17-yard score. Andre Borregales was perfect on Saturday hitting both field goals and extra-point attempts.

After the Wright fumble, Virginia Tech was forced to punt seven consecutive times. It seemed UM was going to cruise to victory. However, in the fourth quarter, the Hokies made it a game by scoring twice. Wells found Malachi Thomas for the 14-yard TD early in the period and then the junior barreled it in himself with 3:20 remaining. The U held on improving to 3-3 (1-1, ACC).

What makes this win great is how it was done without several guys. TVD played well pulling off some lovely throws. Van Dyke made a pretty accurate pass to Mallory in traffic with 6:33 left in the first quarter. He found him again with a dime at the beginning of the second. Of course, we can’t forget the laser to Colbie making it 17-0 before the half. This was with Dax Hollifield all over his receiver too. The ACC QB of the Week also completed a great connection to Jaleel Skinner with 6:47 remaining in the contest.

The defense did very well relegating the Hokies’ run game to irrelevance. Not only that, they owned Virginia Tech for three quarters sacking Wells half a dozen times. Akheem Mesidor was a beast credited with over three (3.5) of those. One negative that truly stood out was the penalties. Miami committed 17 of them costing the Canes 159 yards. That’s incredibly sloppy. It won’t fly against tougher opponents. Now that the Hurricanes took care of the Virginia Tech Hokies, next up is a home game with Duke.