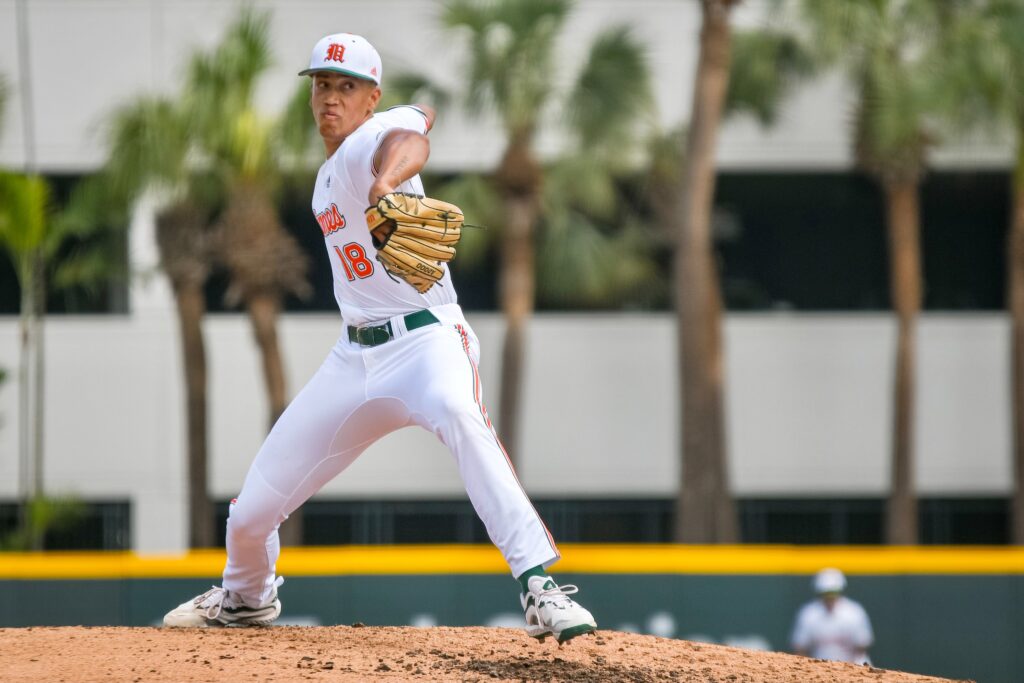 Miami, Florida – On the strength of good pitching and excellent hitting the Miami Hurricanes crushed the Boston College Eagles 12-2, winning the rubber match. Alex McFarlane had a great outing, lasting five frames, surrendering a pair of runs while scattering five hits punching out six. Max Gieg kept the Canes hitless through three before getting subbed out for Eric Schroeder.

The Eagles scored first, but once Gieg was out of the game, UM strung together some hits to take the lead in the fourth. They never looked back, putting up four in the sixth and seventh. The U began ACC conference play this weekend coming up just short in the opener, losing 12-11 before bouncing back, crushing BC 11-3 on Saturday. Following today’s victory, the Canes are now 11-4, completing four consecutive weekends at home.

The pitchers’ duel lasted three innings until the Eagles broke through with an RBI single from Peter Burns. After striking out Luke Gold, McFarlane walked Joe Vetrano before giving up back-to-back base hits making it 1-0 Boston College. McFarlane fanned both McNulty and Stalman to get out of the inning.

Jacob Burke recorded Miami’s first hit of the day in the home half of the fourth, legging out a weak grounder to short. Mike Rosario singled and Renzo Gonzalez drew a walk to load the bases for Dominic Pitelli. The sophomore shortstop lined one to left-center for the two-run double gifting Miami the lead. UM added another with the CJ Kayfus groundout to first.

BC retaliated in the fifth with a solo shot to right field from Cameron Leary. However, Miami answered back with four.
After loading the bases in the sixth, Pitelli found a hole on the right side for the RBI single followed by a sac fly to right by Kayfus, scoring Rosario. Edgardo Villegas, who was having an excellent weekend, extended the Hurricanes’ lead doubling down the right-field line for two more runs to make it 7-2.

Miami wasn’t finished yet. The boys put up another crooked number after the seventh-inning stretch, scoring quadruple times to remain firmly in control. Burke led off the inning with a single, stealing second. Dorian Gonzalez Jr. rang a base hit to left driving in the run. He would later score on a balk. Both Kayfus and Villegas contributed with a hit and sac fly respectively to top it all off. UM’s bullpen kept up the good work taking over where McFarlane left off. The trio of Gage Ziehl, Andrew Walters, and JP Gates was superb on the mound, keeping the Eagles hitless for the rest of the day, sitting down six batters in the process.

UNA FIESTA IN THE SIXTH!!

The Canes will next head to Orlando facing UCF on Wednesday followed by a weekend getaway at Clemson to play the Tigers. Miami returns home on March 25th hosting North Carolina.

It’s not a sweep, but I’ll take it. The offense was on fire all series and the pitching held it down the last two games. They were expected to do well against the Eagles and the Canes took care of business. As impressive as these wins are, much harder opponents lay ahead, FAU included. We’ll see what the team is made of in the next couple of weeks.

McFarlane tossed a good one and deserves taking it home Sunday.

Maxwell Romero Jr. went 0-for-4 this afternoon with his average hovering at .264. Let’s see that number go up!