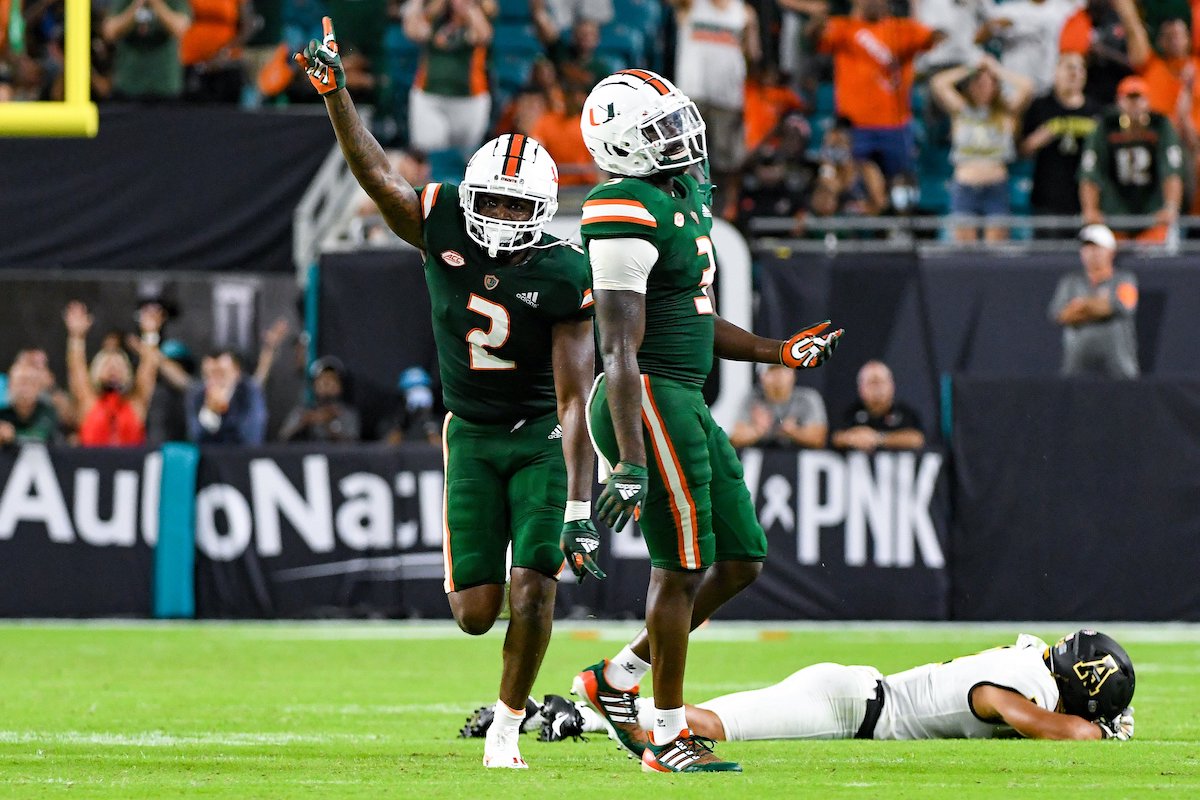 Miami, Florida – It wasn’t pretty but the Miami Hurricanes held on to beat the Appalachian State Mountaineers 25-23 in a disappointing home opener. Heading into Saturday night’s game many hoped the Canes would thump the Mountaineers. What we saw was a lot closer to 2019’s Central Michigan game. Miami’s offense was fairly lackluster with Andres Borregales stepping up, nailing two clutch kicks in the fourth quarter to help win the game. D’Eriq King did not score a touchdown but he certainly racked up yards as a dual-threat.

Defensively, they limited Chase Brice and the running game. Brice performed infinitely better compared to his last visit playing for Duke. The senior passed for 199 yards including a touchdown getting sacked just once. He did throw an interception. Camerun Peoples led the rushing manufacturing 95 yards crossing the endzone in the first quarter.

A second 👀 at the fourth-down TD run from @Cam_Peoples6!

When you look at the final stat line of Miami’s 375 total yards (200 in the air) you wouldn’t think the team did poorly. UM had plenty of opportunities to score but came away with little failing to separate themselves. The defense largely did its part as App State was also unable to really get ahead.

Miami’s offense got off to a pretty slow start punting on their first possession. Tight end Will Mallory missed a very catchable 21-yard pass from King on third down that could have been a TD. Luckily, the D picked up the slack when Chantz Williams tipped Brice’s intended throw resulting in an interception by Amari Carter.

UM took advantage of its excellent field position deep inside Mountaineer territory, eventually converting with a one-yard rushing TD by Donald Chaney Jr. Unfortunately, he did not finish the game due to a lower extremity injury. According to coach Manny Diaz, the prognosis is not good. Outside of this and the safety caused by App State’s mistake on special teams, Miami was lucky to be ahead 9-7 after the first quarter. For all you history buffs out there, this was the Canes’ first safety since November 1, 2014, against North Carolina.

The Miami Hurricanes scored late in the second only to see Cam’Ron Harris’ effort negated by an illegal formation penalty. They had to settle for a 27-yard field goal.

Kick to @jayvirg81 at your own risk!

This is the state of the team right now. Miami Hurricanes down at the half 14-12. Key takeaway is how bad the offense has been playing. https://t.co/yZcBNTNCkn

Fortunately, the home team came out swinging to start the second half, countering with a 12-yard rushing TD from Harris making it 19-14 Hurricanes. Both teams kept on battling. The Mountaineers made things really interesting late-game when Brice found Malik Williams in the endzone making it 23-22. Borregales swung it back in Miami’s favor hitting a 43-yard strike with 2:04 remaining.

Tyrique Stevenson then made the big defensive stop with just 0:55 left breaking up Brice’s intended pass to make it a turnover on downs.

What in the world?

So you may or may not have heard but, no it’s not the bird is the word. During the game, a cat was seen hanging on for dear life from the rafters in what has to be one of the strangest occurrences in college football. Horrified fans looked as the feline dangled precariously trying to get itself out of trouble. The poor thing then fell at least twenty feet although it was caught by the folks standing directly beneath it using an American flag. Talk about crazy.

Well this may be the craziest thing I’ve seen at a college football game #HardRockCat pic.twitter.com/qfQgma23Xm

Barring some serious soul searching, no way Miami’s beating Michigan State. Prior to the season, I marked that game as a loss and the home opener only strengthened the notion. The defense did fine but there’s work to be done on offense. UM was 5-for-16 on third down committing six penalties overall costing them 60 yards. They did not win in time of possession either. There were certainly bright spots especially in the running game but one glaring issue that needs fixing is Mallory’s catching abilities.

King scrambled a lot and stayed on the move (sacked twice) but this was another forgettable performance. Kudos to Appalachian State, they played really well. The Spartans are next.