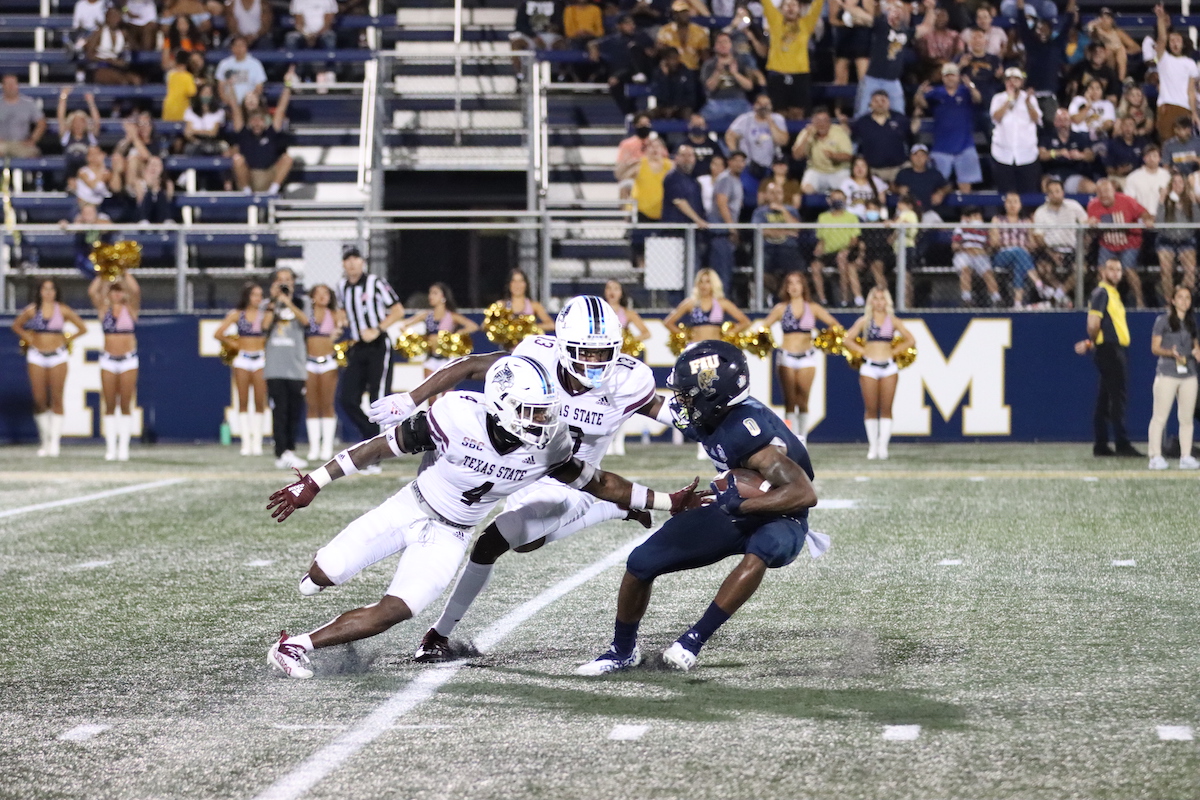 Miami, FL – The FIU Football Panthers dominated LIU last week and looked to continue that trend this week against Texas State. Eager to show that last season’s winless record was due to injury and covid, the Panthers have something to prove this season. However, in Saturday’s game, they somehow outplayed Texas State while simultaneously looking as unequipped as they did all last season.

The Panthers would play their 1st overtime game since 2012 in a losing effort, falling 23-17 with plenty of chances to earn the win. One person you can’t place blame on for the loss is FIU QB Max Bortenschlager. The redshirt senior had a QBR of 133.4 (that’s good), throwing for 259 yards and two touchdowns while completing 50% of his passes. His only blemish all game was the fumble in OT that all but gave Texas State the win. Nonetheless, the kid is deadly accurate, dropping dimes up and down the field. The Bobcats had no answer. Well, they did have one: pass interference.

Texas State was called for five pass interference penalties and it should’ve been a lot more. However, credit to the Bobcats, a 15-yard penalty isn’t as bad as a 45-yard TD pass.

Another silver lining was sophomore wide receiver transfer, Tyrese Chambers. He had four receptions, including 79 yards and a touchdown. He’s a burner and his route running this past weekend was impeccable. He and Max are going to put up big numbers this season. Coach Davis said, “He’s a guy that is explosive, that if you give him opportunities to get open one-on-one, he’s got a chance to make some big plays”.

TD @FIUFootball!@_BigTime0 gives the Panthers life before the end of the half.
Panthers trail Texas State 10-7.#PawsUp pic.twitter.com/X7K232u9X6

Nevertheless, The Panthers did lose the game. Some missed opportunities came from the run game. D’vonte Price is an NFL talent caliber running back. Coach David said postgame, “He could’ve gone last year. He could’ve left and got drafted and gone to the NFL. He wanted to come back to help this program win and have a good season himself.” Looking at the numbers, Price had a good game, rushing for 115 yards and pulling in a 20-yard reception. However, not to place the blame entirely on one player, but his two fumbles came at the worst possible moments, killing any momentum that FIU had built against Texas State during those respective drives. Both fumbles came in Bobcat territory, one of which at the five-yard line. Coach David added postgame, “tonight (D’vonte) was completely not who we’ve ever seen before.” Look for D’vonte to bounce back big time next week vs Texas Tech.

FIU hasn’t won back-to-back games since beating Charlotte and UTEP on October 12th and 19th, 2019 respectively. That’s almost two years ago. If it wasn’t for the victory over Miami, that 2019 season would’ve been a wash. It’s tough for FIU fans to think of what this program could be. There is so much potential, but also a lot of missed opportunities.

Butch Davis is certainly a storied, successful coach, and he has improved the program compared to what they were under the previous coach, Ron Turner. All the same, the program has fallen short of expectations.

This is a big season for Butch and co. FIU has the talent to win, but they’ll need to beat their conference rivals and compete for a conference title. Stumbling into a random bowl game isn’t enough.

Next week, FIU travels to Lubbock, TX to face Texas Tech. Kickoff is at 7 pm. Let’s hope they don’t have another Patrick Mahomes waiting to light it up.