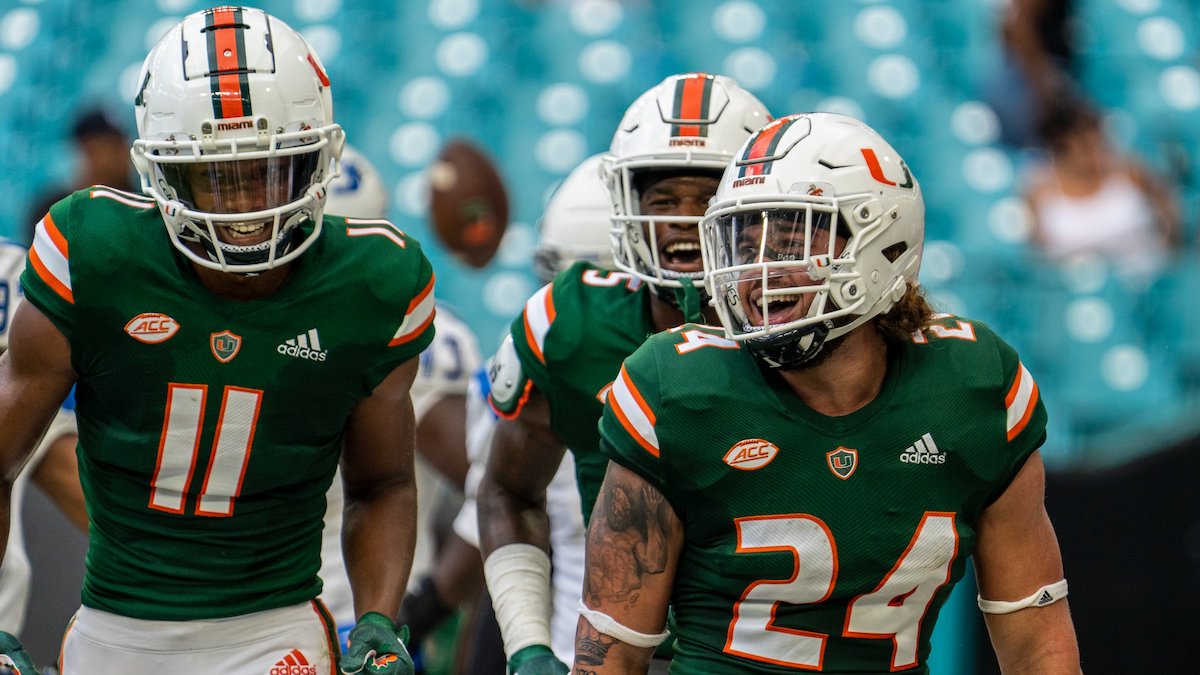 Miami, Florida – The Miami Hurricanes took care of business humiliating Central Connecticut 69-0 producing a school-record 739 yards of total offense. Both Tyler Van Dyke and Jake Garcia took snaps under center as the youth movement made the most of their opportunities. UM scored in nearly every possession never taking their foot off the gas thoroughly outclassing their opponents.

It was a game of firsts as Brashard Smith not only made his first-ever career catch but took it to the house for the 75-yard touchdown. He wasn’t the only one. Jacolby George caught Garcia’s pass late in the third quarter for the 44-yard touchdown, it was his first career catch too. Cody Brown and Thaddius Franklin, Jr. made their debuts at runningback making their presence known on the gridiron. The Canes played a lot of players with several standouts.

The game went as expected (and hoped) with the Hurricanes overwhelming the Blue Devils on both sides of the ball. An overpowering offense put Miami up 49-0 at the half complemented by a dominating defense. In other words, the Hurricanes did what they needed to do. Van Dyke was the starting QB completing his first pass attempt of the game connecting with Mike Harley for 16 yards. Eventually, he found him again to the far left of the endzone for the 5-yard touchdown reception. The Canes came out swinging on their first drive.

The starter finished the day completing 10 of 11 throws for  270 yards and three scores. Garcia became the signal-caller doing his part facilitating the advance culminating in Brown rushing up the middle for the 16-yard TD to make it 21-0.

Late in the second quarter, Garcia showed off his legs rushing for a gain of 45 yards. He shined again in the third quarter when he connected with Romello Brinson for the very nice 17-yard touchdown. Brinson only recorded two catches but based on his potential playmaking ability I’d like to see him get more playing time. Those hands man.

The California native kept on firing finishing the afternoon completing 11 of 14 passes for 147 yards and two TDs. In the post-game presser, coach Manny Diaz conveyed that he was proud of both quarterbacks. He found very few procedural issues when they managed the offense pointing to an exciting future. In sum, UM manufactured 417 yards in the air with 322 on the ground. They were five-for-six in the red zone and seven-for-nine on third down. Defensively, The U collected three sacks and an interception. The INT was by freshman James Williams in his first career start. Overall, Miami committed only three penalties.

They did everything I asked for and more. It was very nice seeing the freshmen step up in what was essentially a developmental game.  After annihilating an outclassed opponent, work remains to be done. There’s little time to celebrate with Virginia next on a short week to start ACC play. If D’Eriq King is unavailable then Van Dyke should be the starter. The RB Corps is going to be interesting. Cam’Ron Harris hit the centennial mark powering two rushing TDs but Brown and Franklin Jr. should also be getting some touches. Thaddius had seven carries for 88 yards including a 31-yard score in the fourth quarter.
Cody, meanwhile, carried the ball 14 times for 77 yards scoring twice. The youngsters are making an argument to play versus the Cavaliers. Don’t forget, Jaylan Knighton returns from a four-game suspension adding another dimension to the position.

That was fun.
Back at it Thursday vs UVA. pic.twitter.com/44TF71Ma9q

In the wake of the victory, the problems didn’t disappear. The season can still turn out terrible. What remains to be seen is whether or not the 69-0 butt-kicking is the high watermark of 2021 or the start of a turnaround. Time will tell.
(Visited 64 times, 1 visits today)