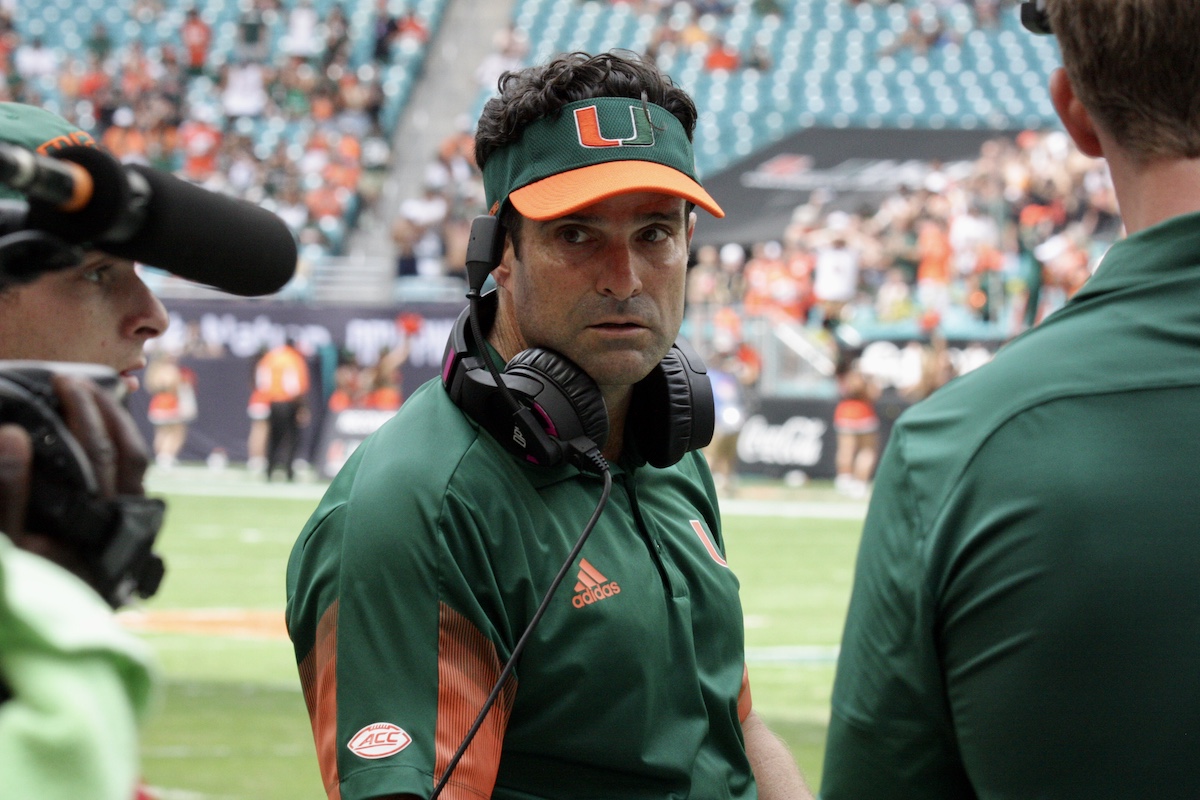 Miami, Florida – This weekend has become a must-win for the Miami Hurricanes. Not because it’s Central Connecticut but to justify why they shouldn’t be 0-3. To restore a tiny bit of the faith fans have lost on this year’s team.

UM looks rudderless losing its edge on both sides of the ball. The Canes have problems tackling and catching. They lack confidence and now health is an issue. D’Eriq King, the focal point of this year’s optimism, is very doubtful for Saturday due to a shoulder injury. Jalen Rivers, meanwhile, is out for the season dealing a blow to an already struggling offensive line. People aren’t hitting the panic button, they’re hitting the rage button. Calls for firing both coach Manny Diaz and Blake James have grown in the wake of the loss to Michigan State.

The Manny Diaz era as the head coach of the Miami Hurricanes depicted in five seconds: pic.twitter.com/cOJV6ZhVMU

These are troubling times in Coral Gables.

Questions have been raised about the team’s direction particularly in player development. Diaz said that it’s ongoing and stands behind the process.

The fans do not share this sentiment. It’s early in the season and this is a small sample size. I get it. However, looking at how the Hurricanes have performed in 2021 there’s no way Miami will finish 9-3. Forget about contending for the coastal division.

During a recent press conference, something called out to me when the topic of Jalen was discussed. Here’s a snippet:

“Jalen’s gonna be out for the year. He had to have an operation on his leg and we’ll get him back in the spring,” coach Diaz said. When asked what’s the injury specifically Manny was very vague.

“It’s a knee. I don’t have the specifics but that’s where it’s at.”

His response was bizarre. He has to know the details, so why not share them? Ambiguous answers aside this is the least of The U’s problems. For some, the season is already a disaster.

Miami has missed 64 tackles on defense.

The next most by a P5 team with 3 games played is Louisville, with 39.

What Needs to Happen

This is what I wanna see on Saturday: an overpowering offense with a suffocating defense. There should be zero turnovers and penalties kept to a minimum. No more messing up on the fundamentals. UM better win by at least four touchdowns or I’m going to be disappointed. This isn’t your usual (ACC) Blue Devils.  At this level it’s not just winning but how you win.

The coach needs to put everyone on notice. Everyone. It doesn’t matter if you’re a rookie or a veteran, if you don’t play up to snuff the player in question sees the bench. Allow the young bloods to get a shot. Light a fire under some of these guys so they don’t get too comfortable nor complacent. We’re already going to see this at the quarterback position.

Diaz stated both Jake Garcia and Tyler Van Dyke will play for certain with the expectation of running the offense. My (current) preference is with Garcia but seeing the two of them alternate will allow for further evaluations going forward.

The Miami Hurricanes plan to debut their new Chain next week against Central Connecticut!!!🟠🟢 pic.twitter.com/IiRNDsZyZ7

Speaking of, crushing Central Connecticut will restore little faith but it’s a start. Next week the Hurricanes commence ACC play beginning with Virginia to end the homestand. Those next few games will show whether the team is getting its act together or falling apart at the seams. Let’s really hope for the former. Otherwise, Diaz won’t see 2022.