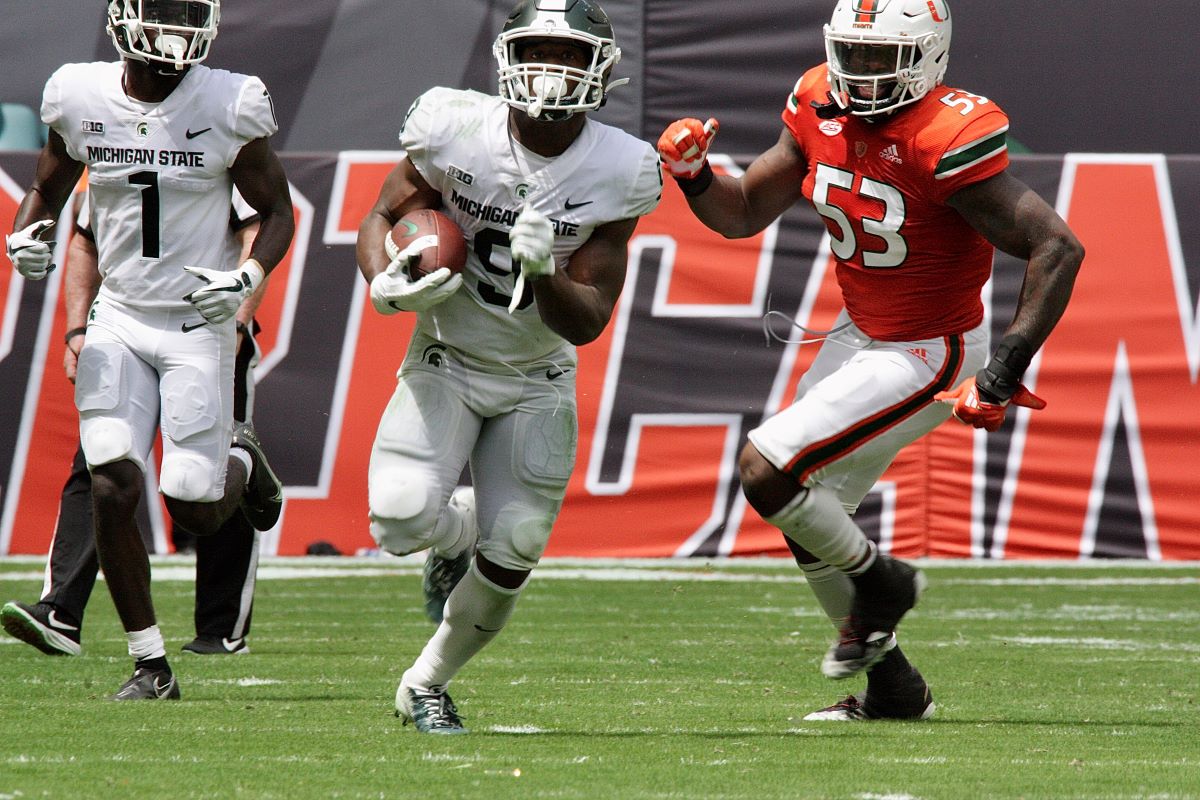 Miami, Florida – In spite of a monster day by Charleston Rambo, the offensive woes cost the Miami Hurricanes big as they fell 38-17 to Michigan State. The Manny Diaz era took another hit in what amounted to a fourth-quarter collapse. There were precious few moments of brilliance in an otherwise really bad day for the attack. The numbers look good but the final score certainly wasn’t. D’Eriq King didn’t look like himself despite amassing 388 yards in the air. In addition to his two touchdowns, he also threw two interceptions and fumbled twice.

What a collapse. Another hit to the Manny Diaz era. #ItsAllAboutTheU#GoCanes pic.twitter.com/SRvP4jTktU

The running game was nonexistent limited to just 52 yards. That isn’t a typo.

Rambo was an absolute beast catching 12 passes for 156 yards and two TDs but it was not enough. Tying a University of Miami single-game record, the Oklahoma transfer was one of the few bright spots in Saturday’s sloppy game.

A series of unfortunate events

UM’s drives in 1st half were plagued by fumbles, dropped passes, interceptions, and even penalties.

Miami’s first possession was off to a great start as the Canes steadily marched up the field. King made a 14-yard pass up the middle to Will Mallory followed by another connection to Mike Harley Jr. on a 3rd and 3 for the first down. However, the excellent drive was abruptly ended as King fumbled running into the middle on MSU’s 35-yard line. It was going to be a 10-yard gain too.

D'Eriq King gets hit from behind and loses the ball, Michigan State recovers!#Miami #MichiganState

Two possessions later Harley couldn’t make the catch on 3rd and 5 forcing Miami to punt. It was another dropped pass by the junior.

He wasn’t the only one drawing the ire of fans. Mallory dropped another pass, this time in the endzone with less than seven minutes in the half squandering an opportunity to extend the lead. The drive fizzled out due to a holding penalty and Andy Borregales missing the 27-yard field goal.

The defense, meanwhile, did an excellent job early on sacking Payton Thorne twice. On their second possession, Chantz Williams absolutely consumed Thorne for the 9-yard loss forcing them to punt away. Williams made things happen. In the third quarter, he broke up a pass intended for Terry Lockett for a great defensive stop. They almost pulled off a pick-six when Tyrique Stevenson very nearly intercepted Thorne’s pass intended for Jalen Nailor.

Unfortunately, the running theme of missed tackles started to emerge as the game went on much to the frustration of safety Bubba Bolden.

“We had a great week of practice. You want different results, you come out here and give it your all and it was the little things.” Bolden said.

He said it very well, the little things add up. At times the defenders looked clueless, missing the necessary hits in order to stop Michigan State. Those mistakes played a huge part in the struggles and eventual collapse.

On MSU’s fourth drive, the defense flubbed a tackle that saw Thorne’s pass to Tre Mosley resulted in a 51-yard play advancing from their own 10 straight to Miami’s 39-yard line. Fortunately for the home team, they never converted. Unable to reach the endzone, Matt Coghlin’s 39-yard field goal attempt went wide right.

Michigan State scored late in the half. Thorne found Kenneth Walker III for the seven-yard touchdown with 2:56 remaining making it 10-7 Spartans. On the ensuing possession, King threw a pick-six into the hands of Angelo Grose intended for Harley to end another drive.

Both teams traded touchdowns in the third quarter. Thorne found Nailor giving Michigan State the 17-7 lead. However, the separation proved temporary as Rambo stepped up with a 14-yard touchdown catch making it a three-point game.

The @MSU_Football start the second half up 10-7 over the #Canes @Kenneth_Walker9 with the TD
Plenty of time left in the game. #CanesFootball #Miami #MSU pic.twitter.com/9lAo3P2D5q

Miami suffered a poorly timed turnover when King got wrecked by Drew Beesley to start the fourth quarter causing a fumble. The ball was recovered by Jacub Panasiuk giving the Spartans excellent field position on Miami’s 13-yard line. MSU converted with a 10-yard pass to Jayden Reed making it 24-14 Michigan State.

Borregales showed off some serious leg, making a 55-yard field goal cutting into the deficit. This is where things go downhill. Michigan State went for the dagger scoring two twice late-game effectively knocking out the Canes. Thorne finished the day throwing 261 yards and four touchdowns. He feasted.

The calls benching certain players and firing Manny Diaz just got louder. UM stands at 1-2 and you don’t have to wait until Monday to know they won’t be ranked. Forget 9-3 or even 8-4. Could this be the start of a terrible season? Fans are already questioning the quality of the team. I don’t know about you but when it comes to big losses they’ve been easy to list. Conversely, today could have been Diaz’s first big victory in his tenure and that certainly didn’t happen.