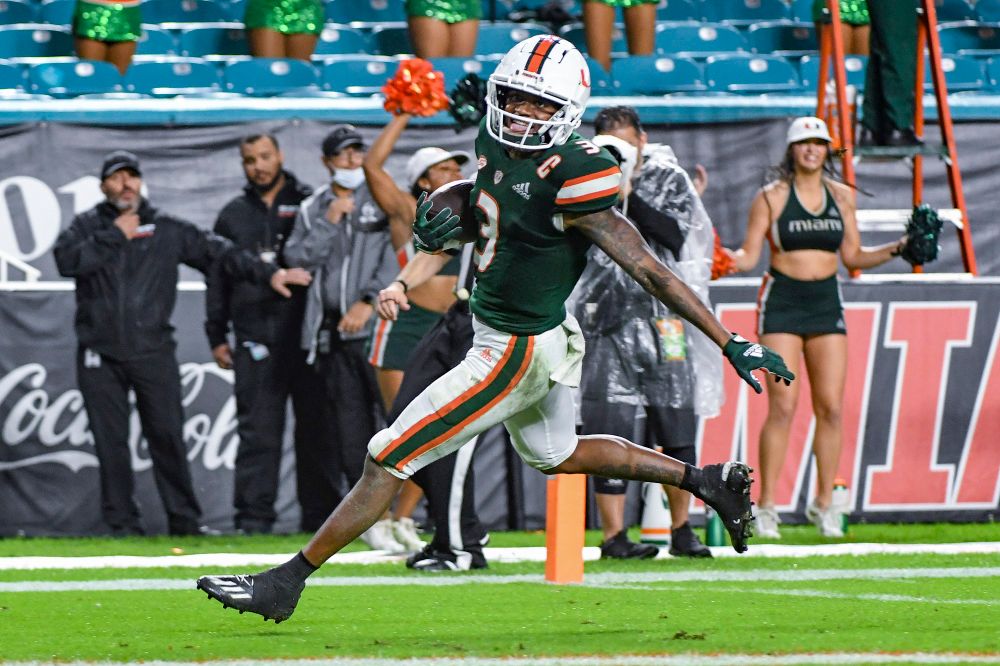 Miami, FL – The Miami Hurricanes held off Virginia Tech, defeating the Hokies 38-26 on Senior Day, ending the home schedule on a positive note. The win was as ugly as the weather, however. UM struggled mightily against the rush versus a team that just fired their head coach, giving up 227 yards in a rain-soaked contest. VT never truly went away, largely on the efforts of quarterback Braxton Burmeister and runningback Connor Blumrick.

Miami scored on their first four drives in a sharp departure from last week’s early offensive struggles. On their opening possession, Tyler Van Dyke found Charleston Rambo for an impressive 39-yard catch on his first throw. TVD eventually found Will Mallory for his 20th touchdown pass of the season.

Will Mallory out here taking ankles as Miami takes a 7-0 lead. 🔥 pic.twitter.com/dh30HjUmaQ

Remember when Miami was down 20-7 at the half last week against Florida State? The difference here is night and day. Van Dyke in the first half alone completed 11 of 15 passes for 235 yards including a pair of touchdowns. Last week it was two interceptions and a fumble. When they entered the half tonight there were no turnovers and only three penalties. UM committed five on FSU’s first drive alone. One thing did stand out. In spite of Jaylan Knighton recording two rushing TDs the Hurricanes’ ground game stood at an ugly -3. The rush was largely neutralized due to the weather conditions.

After a good first half, the offense sputtered. Mallory had a 72-yard TD pass taken away from him due to a holding penalty called on Zion Nelson late in the third quarter. Miami only managed a 30-yard field goal by Andres Borregales.

The play calling took an ugly turn when the Miami Hurricanes went for it on a 4th and 1 early in the fourth quarter. Why is that horrible? It was done from their own 37-yard line in a five-point game. UM was extremely lucky considering it looked like Knighton was pushed back. The Rooster managed to claw that sole yard.

After a big sack by Jared Harrison-Hunte on Virginia Tech’s next possession, the Hurricanes got the ball back to finally jump-start the offense. TVD found a wide-open Mike Harley for the huge 55-yard TD to ultimately clinch it.

Van Dimes at it again! This time to Harley! 🎯@CanesFootball | #ACCFootball

A win is a win

The Canes led by as much as 31-13 only to see the Hokies battle their way towards a one-possession game. VT dominated the time of possession (33:42 to 26:18) while Miami amassed a paltry 54 rushing yards. Despite the struggles, UM did finish with 411 yards total offense alongside a 50% success rate on third down (6-for-12), keeping the penalties to a minimum. Not only that, the O-line did a superb job protecting Van Dyke denying the Hokies of any sacks. Regardless of the momentum shifter towards Virginia Tech in the second half, the coach was very pleased.
“Very proud of our football team from start to finish.” Manny Diaz said.
I don’t know about the last part but they made the big stops on defense and produced one more touchdown for the victory.

For the seniors, it was their last college appearance at Hard Rock Stadium. The defense notched four sacks, two of them from veterans Deandre Johnson and Zach McCloud. Harley, meanwhile, finished the night with three catches (and five targets) for 65 yards and a score. He will cherish that last touchdown, it was a real beauty.

Although he was not on the field, D’Eriq King was there for his teammates. His unfortunate season-ending injury put a damper on the team’s hopes of seeing one last productive year, but King found other ways to support the effort. This was as much his night as any of the other seniors. It was great seeing him play for The U.

One game remains, a road stint to Durham against Duke.