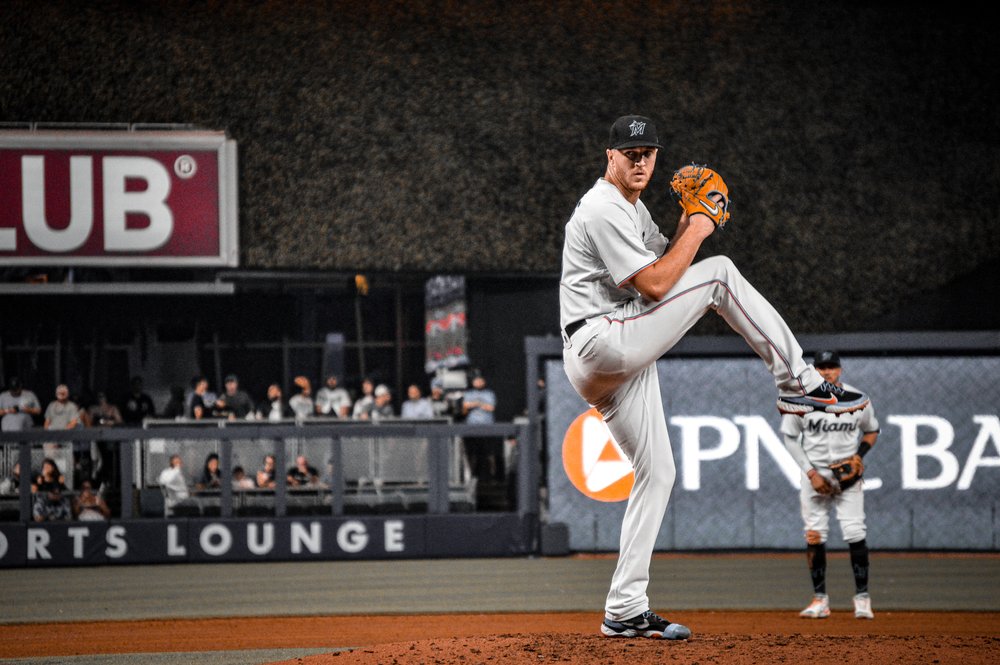 Miami, FL – It has been over a year since Washing Nationals’ longtime ace, Stephen Strasburg, pitched off an MLB mound. The 2019 World Series MVP made his 2022 season debut in the series finale against the Miami Marlins after making only seven starts in the last two seasons combined. Miami won the first two games of the series and looked to sweep Washington with Trevor Rogers on the mound for the Fish.

Stephen Strasburg is no stranger to the Miami Marlins. Since 2010, Strasburg has 21 wins against the Marlins. He was also the starting pitcher in the final game of the Florida Marlins in September 2011. After a decade of dominance over the Fish, Miami would strike first in his return.

On the first pitch of his outing, Jazz Chisholm Jr. welcomes him with a bunt single down the third base line and wasted no time stealing second base. Both Garrett Cooper and Jesus Aguilar grounded out while Jazz remained on second but Avisail Garcia kept the inning alive by drawing a walk. Miami had runners on first and second for Jesus Sanchez. On a 1-0 pitch, Sanchez rips a hard ground ball off the glove of Ehire Adrianza and Jazz scored easily. Garcia advanced to third while Sanchez hustled to second thanks to the deflection on the diving play.

Miami’s two-out rally continued when Jon Berti took Strasburg’s curveball back up the middle to bring in Garcia and Sanchez. Miguel Rojas flew out to end the inning but Miami had a 3-0 lead. It wasn’t the expected opening frame Nationals fans had in mind in their ace’s return.

Strasburg shook off that rough first inning and looked in vintage form by striking out the side in the second. Strasburg would go on to pitch two more scoreless innings until the Marlins came back around for the third time through the lineup.

373 days since his last strikeout.

A Balanced Lineup with Sanchez

The Nationals were able to reach within one run after scoring two runs in the top of the fifth. Bryan De La Cruz flew out to lead off the bottom half of the fifth but Jazz again laid a bunt down the third baseline for his second hit of the game. The Nationals’ defense is shifted to the left side so they are giving Jazz all that space on the right to work with.

Cooper followed Jazz’s infield single with a double down the third baseline. Third Base Coach, Al Pedrique, had his hands up to hold Jazz at third but he ran right through the signal and was safe at home for Miami’s fourth run. Cooper advanced to third on a wild pitch and then Aguilar singled to center field to make it a 5-2 Miami lead.

Jazz Chisholm Jr. had a sprint speed of 30 ft./sec scoring on a double to left by Garrett Cooper.

He ran through a stop sign. Going that fast, it might've been tough to stop.#Marlins up 5-2 in 5th after Jesús Aguilar followed with RBI single. pic.twitter.com/mchoi7kw3A

Garcia added to the hit column with a double in the left-center field gap but Aguilar was thrown out at the plate trying to score. Strasburg needed one more out to get out of the inning but Sanchez had other plans. The left-handed slugger capped off his night and ended Strasburg’s night with a two-run homer to right field.

A VIOLENT swing from Jesús Sánchez.

Strasburg did not complete the fifth inning and was pulled from the game after the Sanchez home run. After 4 2/3 innings, Strasburg exited with seven earned runs and there is definitely some rust that still needs to be shaken off.

A Step in the Right Direction for Rogers

It has not been the best of starts in 2022 for Trevor Rogers. Going into his start, he had a 2-5 record with a 5.80 ERA. Starting the game, his fastball velocity looked great and was touching 98 mph. He was in a small jam in the first inning with runners on first and third with two outs. Lane Thomas and Josh Bell both singled in the inning.

Rogers struck out Maikel Franco to end the scoring threat. Rogers would go on to pitch back-t0-back 1-2-3 innings in the second and third. At one point in his outing, he retired eight batters in a row and had four shutout innings under his belt.

One of Trevor Rogers' fastest pitches of the season, and he put it in the perfect spot 🎯 pic.twitter.com/wrdbq3gBNL

In the fifth inning, Riley Adams led off with a single but was thrown out at second when Luis Garcia reached on a fielder’s choice. Victor Robles followed up with a single and the Nationals were coming up for their third time around. Lane Thomas, walked and Washington had the bases loaded for the heart of their lineup.

The Marlins moved their infield in and it paid off because Adrianza grounded to shortstop and Rojas threw to home for the force out. Rogers was not out of trouble yet with Juan Soto next in the order. Soto lined an opposite field single to left and brought in Adrianza and Thomas for the Nationals’ first two runs.

Right back in it!

Juan Soto works a tremendous AB and gets the Nats within a run on a two-run single 🔴⚪️🔵 pic.twitter.com/FwAhnufQu1

That was all the damage the Nationals were able to do against Rogers as he escaped the inning by getting Bell to fly out. This is a start that Rogers can build from. He showed glimpses of his 2021 form and had better command of his fastball. He was in line for the win and had to watch the bullpen hold it out from the sixth inning on.

Trevor Rogers was focused on competing Thursday night and how he was able to adjust his mindset against the Nationals. #MakeItMiami pic.twitter.com/JMkWPGv4Dt

Closing out games has been one of the bigger issues the Marlins have been trying to figure out. Don Mattingly has used different relievers for the ninth inning throughout the season and Tanner Scott has been the man called recently. The Nationals chipped at Miami’s 7-2 lead by scoring two more runs in the seventh. Scott was entering the ninth with a three-run lead.

Scott made quick work of Thomas and Adrianza with two strikeouts. Soto was the last batter in Scott’s way and he lined out to De La Cruz in left field. Scott earned his third save of the season and the Marlins swept the Nationals. Miami went 5-2 on the home stand and is now five games under .500. They begin an 11-day, 10-game road trip starting Friday night against the AL West-leading Houston Astros. The first pitch is at 8:10 pm.

Ballgame!!! Scott was lights out in the 9th. Goes 1-2-3 with two K's. #Marlins win 7-4 and get the series sweep over Washington. Went 5-2 on the homestand and will have a tough upcoming road trip starting tomorrow against the Houston Astros. @LemonCityLive #MakeItMiami