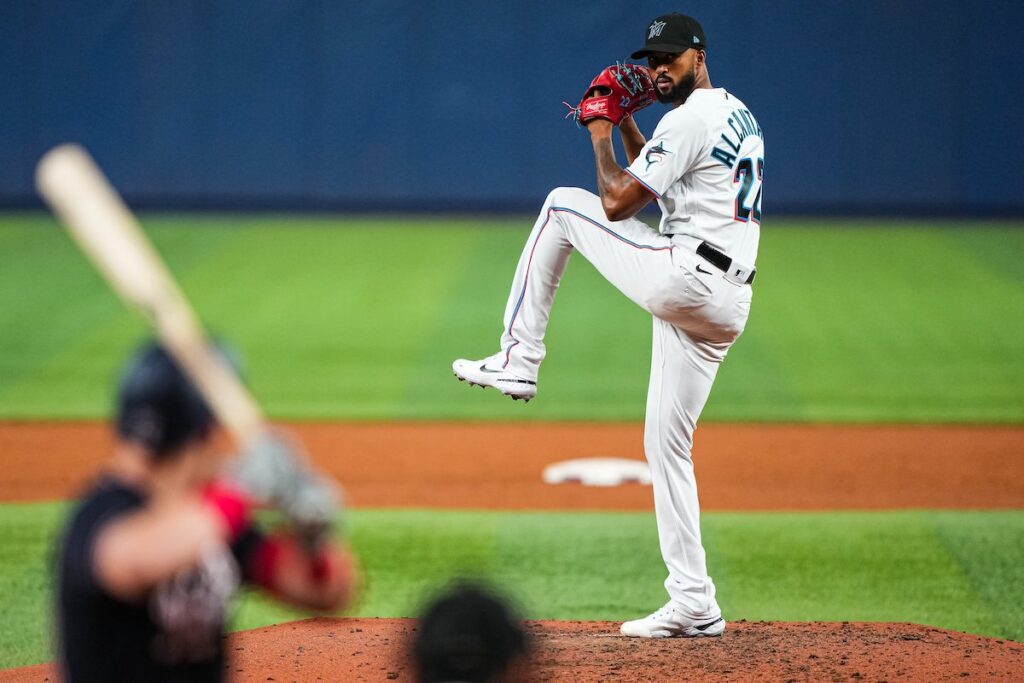 Miami, FL – The Miami Marlins were back in action Wednesday night against the Washington Nationals for the second game of a three-game series. Thanks to the offense erupting for 12 runs, Miami took game one and were in good shape to win the series with Sandy Alcantara on the mound.

It’s Sandy’s World, We Are Just Living In It

Going into the game the Marlins had won five straight starts by Alcantara and he has gone at least seven innings in each outing. Sandy started the game by retiring the Nationals in order. In the second inning, Washington was able to get two runners on base with two singles but Alcantara got Ehire Adrianza to ground out.

Sandy was extremely efficient with his pitch count to start the game. 23 of the first 25 pitches he threw were strikes and after three innings, he threw 33 pitches, and 30 were strikes. He was on pace to pitch a complete game and the Nationals had no answer for him. Washington did not get many opportunities to score off of Alcantara after the second inning. It was the only inning where they had more than one runner on base.

Most underrated pitcher in baseball Sandy Alcantara is doing it again.

Alcantara was rolling through the Nationals inning by inning and finished with 94 pitches after the eighth. There was no question that Sandy was coming back out for the ninth but Miami’s offense had failed to provide any run support. It was a 0-0 game in the ninth and Sandy delivered another 1-2-3 inning. Alcantara tossed nine scoreless innings and lowered his ERA to 1.61 which leads the National League. He also leads all of Major League Baseball in innings pitched with 83.2.

Miami’s ace scattered six Nationals hits throughout his start and did not issue any walks. His night was over on the mound after 105 pitches and had to watch his team win it in the bottom of the ninth or in extra innings.

The Marlins had Washington’s starter, Josiah Gray, on the ropes in the first few innings of the game. In the bottom of the first, Garrett Cooper and Jorge Soler reached base with back-to-back one-out singles. Jesus Aguilar reached on a catcher’s interference and the Marlins had the bases loaded in the opening frame. Unfortunately, Avisail Garcia and Jon Berti struck out to strand all three runners.

Cooper and Soler led off the third inning with singles and Miami had runners on first and second with no outs. Gray was able to work out of trouble again by retiring Aguilar, Garcia, and Berti in order. It was a frustrating start for Miami’s offense. Gray would pitch five complete innings and only surrendered two hits after his third-inning jam.

Washington’s bullpen kept the Marlins scoreless in the late innings but they had a chance to walk off in the bottom of the ninth off Kyle Finnegan. Berti started the inning off with a single and then stole second base. The Marlins had the winning run in scoring position and then Miguel Rojas drew a walk. With two runners on and no outs, the Marlins decided to bunt with Jacob Stallings. The sacrifice bunt backfired and Josh Bell was able to get the force out at third base.

Bryan De La Cruz then reached on a fielder’s choice and stole second. Miami had Rojas, the winning run, 90 feet away with two outs but Jazz Chisholm Jr. ended the inning by striking out. Miami had chances to avoid going to extra innings and securing a win for Sandy.

In the bottom of the 10th, Jazz was the placed runner on second base to start the inning. Cooper lined out to right field but it was not deep enough for Jazz to tag up and go to third. Jorge Soler was next in the order but was lifted for pinch-runner Luke Williams in the eighth inning.

Willians Astudillo was called to pinch-hit for Williams and he blooped a single to shallow right field. Jazz did not get the greatest of jumps from second base and had to read the play in case Juan Soto got to the ball. The ball landed in front of Soto and Jazz was racing around third base to score but was called out at the play.

Willians Astudillo looks to score Jazz Chisholm Jr., but the ruling on the field is OUT…@Marlins | #MakeItMiami pic.twitter.com/gdZrGZnPvK

Mattingly lost his replay challenge earlier in the game but that type of play went to an umpire review because of the impact it could have on the outcome of the game. Looking at the play again, you could see Jazz getting his hand around the tag and touching the edge of home plate. After review, the umpires overturned the call, and Jazz was called safe. The umpires declared that Washington’s catcher, Keibert Ruiz, was blocking the plate.

Astudillo would advance to scoring position on Soto’s throw to home and next was Aguilar. He had been slumping as of late and was 0-8 in the series leading up to this at-bat. On a 1-1 pitch, Aguilar grounded a ball up the middle and it deflected off second base. The ball rolled into shallow center field and Astudillo was able to score the winning run easily.

One of the whackiest 2-1 wins you’ll see. pic.twitter.com/pL65E8n1ol

Running Down That Line

Miami was not able to give Sandy the win but the offense came through in extra innings. The Marlins have taken the first two games of this series and will go for the sweep tomorrow with Trevor Rogers on the mound. Nationals fans have a lot to look forward to tomorrow. Their longtime ace and 2019 World Series MVP, Stephen Strasburg, will make his 2022 season debut tomorrow. The first pitch is scheduled for 6:40 pm.

Enjoy this gem one more time, the music makes it so much better.

Running Down That Line (A Deal with God) pic.twitter.com/bS1pJu2IZ2