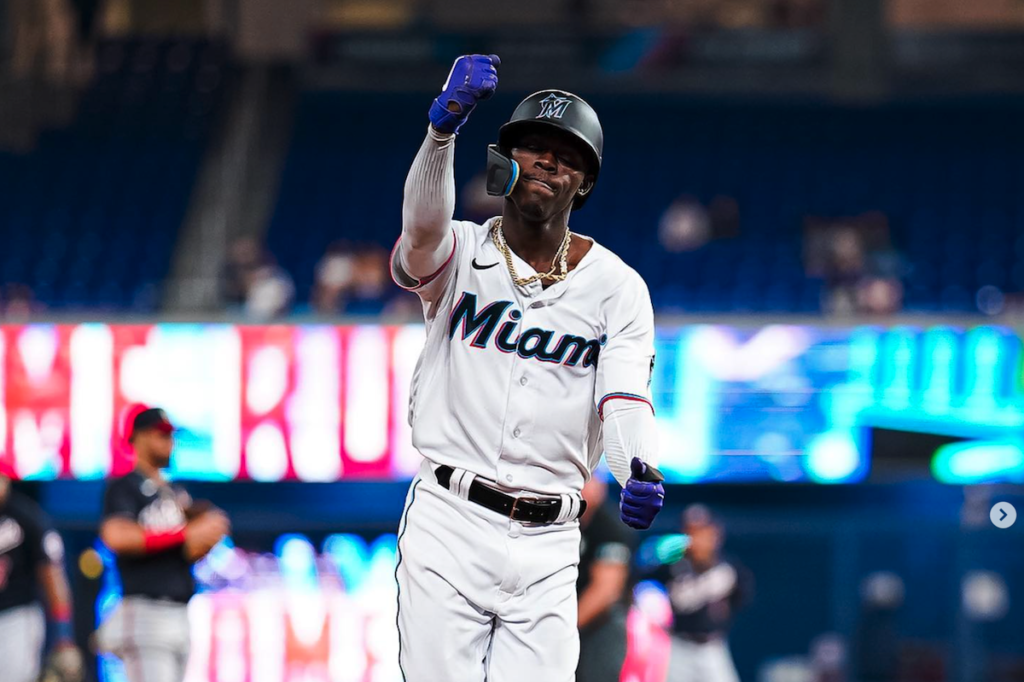 Miami, FL – It wasn’t a routine day at loanDepot Park for the Miami Marlins. Before game one of their three-game series against the Washington Nationals, the Marlins held a team meeting that lasted for 90 minutes. Manager Don Mattingly called the team meeting but didn’t give too much information on what was discussed. Either way, the Marlins had a game to play and Edward Cabrera was making his second start of 2022 after a quality start at Coors Field last week.

Marlins had a 90 minute team meeting called by Don Mattingly. Said things had to get out in the open, and it was not a rah-rah meeting. Many people spoke. Said he would not be surprised if the team came out flat tonight. Would not disclose any further.

Washington’s starter, Joan Adon, had an easy 1-2-3 first inning and was off to a good start until his outing to a turn in the second. With one out in the inning, Avisail Garcia singled to right field. Jesus Sanchez followed Garcia in the batting order but was pulled from the game with upper back tightness. Bryan De La Cruz pinched hit for him and answered the call with a single.

Jon Berti grounded out after that but was able to advance both runners into scoring position with two outs. Miguel Rojas worked a walk and the bases were loaded for backup catcher Nick Fortes. Miami’s backstop lined a base hit to right field to bring in Garcia for their first run of the game.

Asked Donnie about Nick Fortes getting the start today and what he thought of his at-bats after going 2-2 with 4 RBIs and 2 walks. Kept the second and fifth inning alive for Jazz’s grand slam and two- run homer. @LemonCityLive #Marlins #MakeItMiami pic.twitter.com/rvsIAYgAPW

That was a crucial hit for Miami since it kept the inning alive for what would happen next. The lineup flipped over back to Jazz Chisholm Jr. and he was able to work a 3-0 count. He had the green light and connected on the first grand slam of his career. With one swing, Jazz gave Miami a 5-0 lead after two innings. Chisholm is the first Marlins player to hit a grand slam on a 3-0 count in franchise history.

In the fourth inning, the bottom of Miami’s lineup started another rally. Berti started the inning off with a walk and then stole second base. Rojas singled to right field and Miami had runners on first and third with no outs. Fortes was the last batter in Miami’s lineup and he stepped again in a huge way. On the first pitch of the at-bat, Fortes drilled a hanging curveball off of Adon for a three-run shot to left field. Fortes had himself a career night going 2-2 with four RBIs and Miami led 8-0. That was the last pitch of Adon’s night but Miami was not done yet with no outs in the inning.

After Jazz struck out, Garrett Cooper doubled to right-center field to continue his hot hitting in June. Jorge Soler doubled in his first at-bat and he followed Cooper’s double with an opposite-field home run. Miami’s offense had erupted against Washington’s pitching for 10 runs and 10 hits after just four innings.

Jazz’s night got a lot more special in the fifth inning. After Washington retired the first two hitters of the inning, Fortes worked a walk and kept another two-out rally alive for Chisholm Jr. Jazz didn’t take any pitches that at-bat and wasted no time launching his second home run of the night. That was the second multi-homer game of his career and the six RBIs he collected were a new career high. This was an encouraging performance to see out of Jazz after he’s been slumping since returning from an injury.

This Marlins team could realistically have three all-stars.

Jazz Chisholm Jr. is one of them, and he’s hit 2 HRs tonight. pic.twitter.com/OZNEH8xjZZ

“When you’re going from not playing for months and then going into Spring Training and then getting your stuff going its like you get used to playing every day and then you go into seven days of not playing and then you just got to try and revamp what you had going on so I’m just trying to get back to that and today it felt better,” said Chisholm after the game.

Edward Cabrera looked to build off a strong outing at Colorado allowing no runs in six innings. That is not an easy accomplishment, especially at Coors field, but Cabrera returned to pitcher-friendly loanDepot Park. Cabrera did not encounter much trouble or traffic on the bases in his first five innings. He only gave up one hit and walked one batter before his only blemish of the night.

In the top of the sixth, Washington’s shortstop, Luis Garcia, led off the inning with a home run. By that point of the game, the Marlins were already leading 12-0 so Cabrera had plenty of room for error. The 24-year-old ran into more trouble that inning when he hit Juan Soto with a pitch and walked Nelson Cruz with two outs.

In the following at-bat, Cabrera got Josh Bell to ground out on a fielder’s choice and the right-hander escaped the only jam of his start. He finished with 99 pitches and after two starts, he has only given up one run in 12 innings pitched.

After 12 runs, four home runs, and 14 hits the Marlins have taken the series opener 12-2 and look to win the series tomorrow. Miami is in good shape to win two out of three against Washington with their ace, Sandy Alcantara, on the mound. Alcantara is going into the game leading MLB with the most innings pitched. First Pitch 6:40.