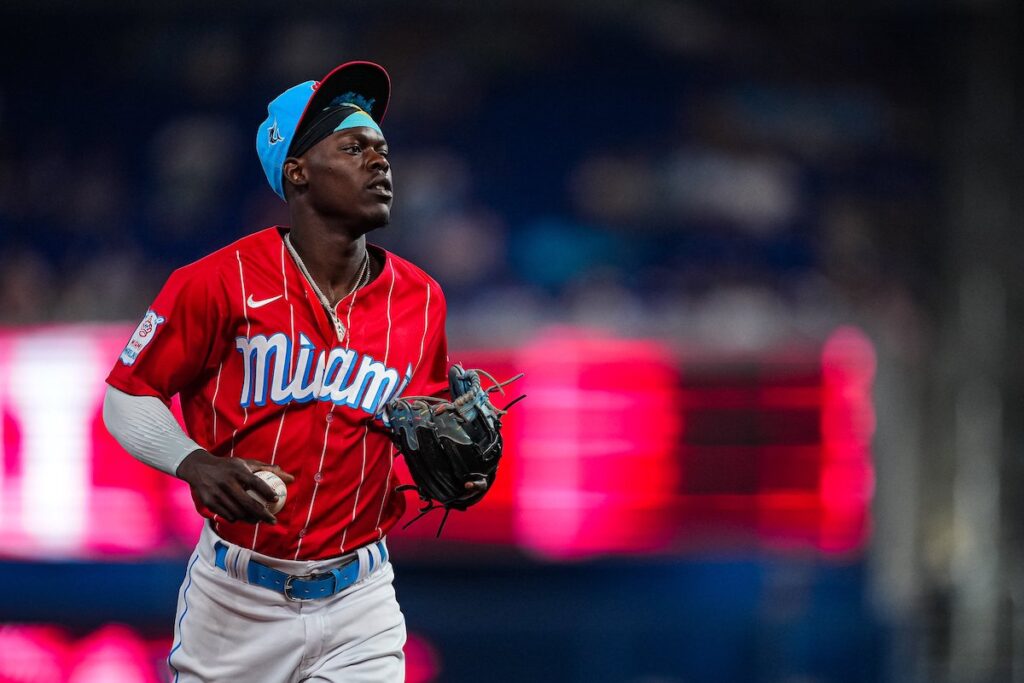 Miami, FL – The crowd was buzzing more than usual at loanDepot Park Saturday night. It wasn’t your average weekend for a Miami Marlins (32-37) game. The New York Mets are in town for a three-game series and the seats were flooded with blue and orange. The roars of the Mets’ loyal fans in Miami consumed the cheers and festivities of Bahamian Heritage Night.

The Mets (46-26) took game one of the three-game set Friday night 5-3 and continued to lead the pack in the NL East division. Since the Opening Day game, there was a playoff atmosphere back in the ballpark. Miami looked to even up the series against New York with Trevor Rogers on the mound.

The Two Sides of Trevor

Trevor Rogers has been going through his sophomore slumps in 2022. The southpaw has shown flashes of brilliance just like his 2021 All-Star form but hasn’t seemed to put it all together this year. He’s had trouble going deep into games and has only pitched six innings one time this season. The command of his pitches has been another issue that doesn’t help him put hitters away quickly. His pitch count is always at a high count early in games because he has been in a lot of stressful innings.

The last time Rogers pitched, he faced the Mets in New York on June 20th. It was an up and down outing for Rogers. He racked up seven strikeouts in five innings but surrendered four runs, three unearned. Rogers received the loss and looked to get back in the win column and for some redemption against the Mets.

It was all Trevor in the first inning. He looked comfortable and was in control of all his pitches. The first inning has been challenging for Rogers and has struggled to start games strong throughout this season. It was a great sign to see Miami’s starter strike out the side in the opening frame.

Trevor Rogers strikes out the side in the first against the Mets.

As good as Rogers was to start the game, the Mets still struck first. In the second inning, Pete Alonso led off with a solo home run to right field. Rogers missed the location Jacob Stallings wanted for the fastball, and Alonso muscled it opposite field to give the Mets a 1-0 lead.

After the home run, Rogers settled back in and retired the next three batters in order. Alonso’s solo shot was the only hit Rogers gave up the first time through the Mets’ lineup but New York adjusted the second time around.

1-2-3 third inning for Rogers, retired the last six batters in a row after the Alonso home run. #Mets still lead against the #Marlins 1-0 @LemonCityLive #MakeItMiami

“Pop” of the Mitt

The fourth inning spelled trouble for Rogers. Starling Marte led off with a single and Francisco Lindor followed that up with a double down the left field line. Rogers was able to get Alonso to fly out but Mark Canha drove in New York’s second run with an RBI groundout. Miami’s starter was not in the clear yet.

He got himself into more trouble by walking JD Davis to put runners on the corners. Eduardo Escobar made Rogers pay for the two-out walk with an RBI single to left field.

Rogers limited the damage in the fourth but found himself in similar territory the following inning.  After James McCann grounded out to begin the inning, the Mets strung together three consecutive base hits to load the bases. Alonso was making his way to the plate to face Rogers but Miami’s manager, Don Mattingly, decided to go with a new arm. With the score tied 3-3, Zach Pop entered the game in a crucial spot. He got Alonso to fly out and struck out Canha to keep the game tied.

Pop’s velocity was the highest it ever has been. He only threw nine pitches and his sinker was in the upper 90s, topping out at 99 mph. The momentum could have swung in New York’s favor if Pop did not pull through. It was a good pick-me-up for Miami, especially for Rogers.

Trevor Rogers talks about Zach Pop’s appearance in the fifth inning escaping a bases loaded one out jam and keeping the #Marlins in the game. @LemonCityLive #MakeItMiami pic.twitter.com/5qbmgkEx4W

Marlins Respond to the Mets

New York’s starter, Chris Bassitt, was dealing early on and the Marlins only collected one hit off of him up to that point. Miami was kept scoreless for the first three innings of the game and was down 3-0 heading into the bottom of the fourth. The Mets scored two runs in the top half of the inning to extend their lead but Miami responded.

Garrett Cooper led off the inning with a single but made a costly decision running the bases. Cooper was thrown out running from first to third on a base hit to right field by Jesus Aguilar. Jesus Sanchez was next in the lineup with two outs and he saved the inning for Miami. Sanchez connected for his 10th home run of the season with a two-run blast to the right field upper deck.

All of the sudden this baby is a ballgame!

Miami was back in the game with one swing and the lineup had a better approach against Bassitt after a stress-free start to the game. In the following inning, Bassitt retired the first two batters but Miami found some two-out magic. Bryan De La Cruz got the starting nod in right field to give Avisail Garcia a break.

De La Cruz took full advantage of the extra playing time and tied the game in the fifth inning. On a 2-1 count, De La Cruz drilled a pitch down the left field line and off the foul pole. Bassitt would hold Miami’s offense to just those three runs. After De La Cruz tied the game, Bassitt pitched a scoreless sixth and seventh inning to round off a strong outing.

Bryan De La Cruz homers and it's tied up in Miami! pic.twitter.com/reDX2tI4N4

Jimmy Yacabonis was the new pitcher for Miami in the eighth inning. He was tasked with facing the heart of New York’s lineup starting with Alonso. It was a repeat of the fourth inning as Alonso greeted Yacabonis with a leadoff home run. Alonso’s 22nd home run of the season broke the 3-3 tie and it was his 14th career multi-home run game. The Marlins have been on the wrong end of a few of those games as five of them have been against them.

When Pete Alonso gets a hold of one he DOESN’T Get cheated @GottaBelievePod pic.twitter.com/PCZqVnF5je

New York had a 4-3 lead entering the ninth inning and Miami went with Richard Bleier out of the bullpen. The Mets added an insurance run on Brandon Nimmo‘s RBI double after McCann reached base with a single. Miami was down by two runs entering their last at-bats and faced New York’s closer, Edwin Diaz.

Miami did not put much of a fight against Diaz as he struck out the side for an uneventful end to the game. Diaz was hitting triple digits with his fastball and he overpowered Jorge Soler, Aguilar, and Sanchez. He earned his 16th save of the season and secured another series win for the Mets.

BTW, Edwin's appeal on that swing is smooth af. pic.twitter.com/Pg55EhdJ6T

The Marlins will look to avoid the series sweep tomorrow with Daniel Castano on the mound. A win tomorrow will also give Miami a winning record in this current homestand. New York will respond with their lefty, David Peterson. The first pitch is at 12:05 pm.