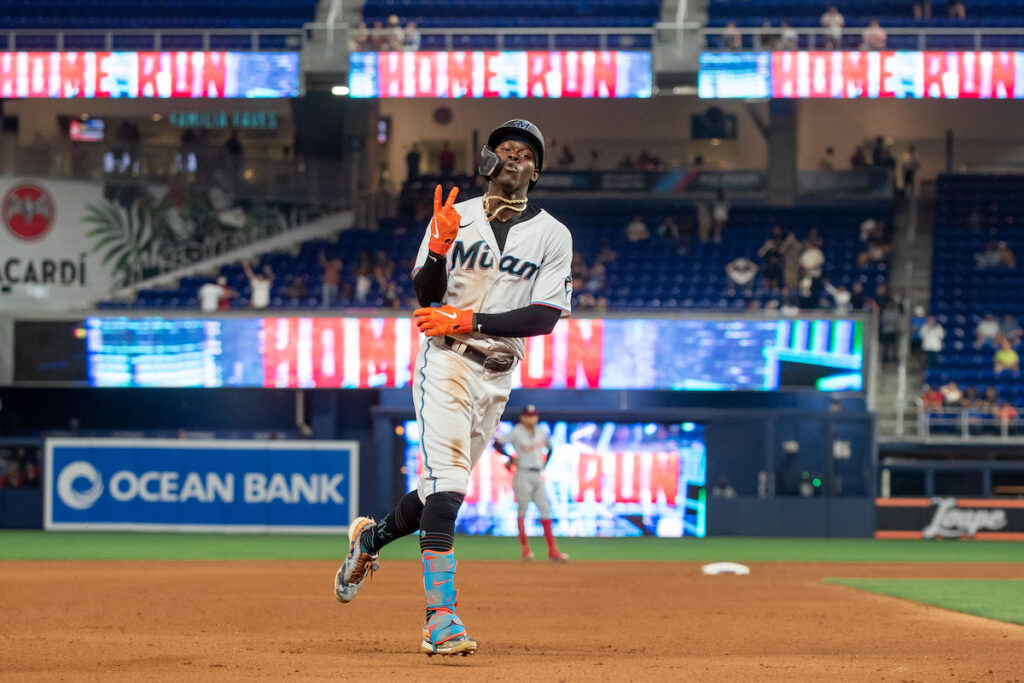 Miami, Florida –The latest tally is showing Jazz Chisholm Jr resonating strongly with the fans putting him in prime position for the All-Star game. Nabbing 634,762 votes thus far, the Bahamian Prince leads the pack in the National League at second base. That’s ahead of guys like Ozzie Albies, Jeff McNeil, and Gavin Lux. Pretty good company.

.@j_chisholm3 homered. Now do your part.

Time and again Jazzy has shown why he’s an electric player. First off his presence (or lack thereof) changes the dynamic of the game. Whenever Chisholm is not in the lineup the team is missing that extra oomph at the plate. No, I’m not necessarily talking about the power he brings. I’m talking about his ability to crank out those clutch hits. The guy not only swings a good bat but he’s got the glove and the speed. He’s steadily evolving into a complete player with the best years of his career still ahead of him. There’s also his great personality.

Here's @j_chisholm3 postgame. He's one of the big reasons why baseball is so fun and exciting for fans#MakeItMiami pic.twitter.com/d8gN1GXW4r

When it comes to the non-pitchers, only Garret Cooper (designated) and Jesús Aguilar (first basemen) have cracked the top 10 in their respective areas. So how’s Miami’s fan-favorite doing compared to other players? Well, several broke the one million vote mark after the first batch of results. It’s the expected big names: Bryce Harper, Mookie Betts, Ronald Acuña Jr., Alejandro Kirk (more on that later), Aaron Judge, and Mike Trout. Others are drawing closer too. We’ll see if Chisholm can keep his slight lead and end up being the starting second basemen for the National League at the ASG. And whaddya know, Saturday was Jazz Chisholm bobblehead day. I need to get his and R. A. Dickey’s.

Aside from seeing the usual suspects, it’s nice to see the Toronto Blue Jays well represented. Not only is Kirk leading at his position, but so are Vladimir Guerrero Jr. and Bo Bichette. According to Andrew Simon, Toronto is on the verge of sending a starting catcher and shortstop to represent the team for the first time ever at the All-Star Game. Why am I mentioning this? For those that are unaware, before the Marlins my team was actually the Blue Jays. Just before the Fish played their 1993 inaugural season, I discovered the 1992 (and ’93) World Series Champions.

In keeping the theme of loving all things blue (Jazz’s hair color hits the spot here) I have always been drawn to their jerseys. It’s what made me become a fan in the first place. When my parents were shopping at a local Circuit City I ventured into the section where several televisions were on sale. The TVs they had on display were showing footage of the 1992 World Series. Seeing the Jays play in their road uniforms drew me right in. Beating the Braves would become a plus for me later. Coincidentally, this played out again the following year versus the Phillies although by then I had a home team to cheer for.

Returning full circle with the help of the color blue, I can’t wait to see Jazz in his first of many All-Star games. The guy is going to be amazing.