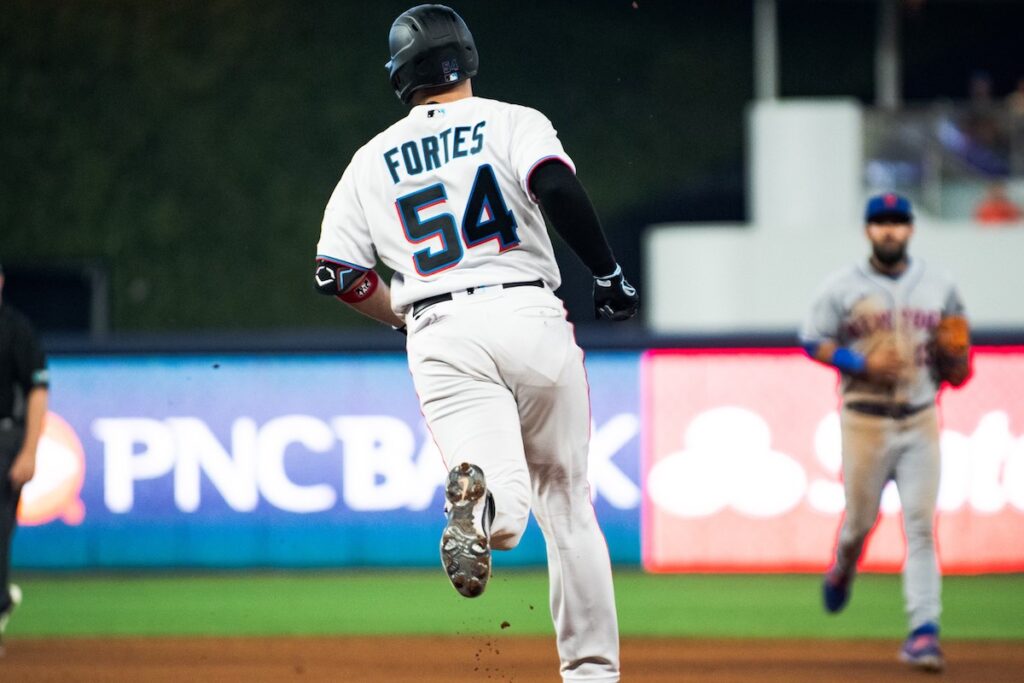 Miami, Florida – Today is a very special day for Nick Fortes hitting his first-ever MLB walk-off, helping the Miami Marlins down the New York Mets 3-2. With his parents in attendance, Fortes played the role of hero abruptly taking away the Mets’ growing momentum. When asked what the win meant for him he aptly said it avoided being swept.

Stepping into the box the 25-year-old catcher tried to predict what Adam Ottavino had up his sleeve.

“I thought he was going try to throw a first-pitch sinker and then he threw a really good slider that I did not see well,” he said. “I kinda figured he’d throw it again so I was just sitting on it the next pitch.”

Postgame presser with @nickfortes7 after his walk off bomb won it for the @Marlins this afternoon. #MakeItMiami pic.twitter.com/IP0oNq3f5M

Fortes absolutely crushed it. It wasn’t just his late-game heroics that made the difference. Behind the plate, he guided starting pitcher Daniel Castano and the rest of the pitching staff. His defense was great too, especially in the ninth blocking Tanner Scott’s pitches.

Castano ran into some early trouble giving up the leadoff double to Brandon Nimmo followed by a walk to Starling Marte. The lefty regained control retiring the heart of the order that culminated in fanning Mark Canha.

Miami then responded with a two-bagger of their own.

Jon Berti led off with the big hit getting into scoring position. He came home on the Garrett Cooper sac fly.

Nimmo tied it up in the third seeing Castano’s first pitch and driving it deep to center field for the solo shot. Pete Alonso drove in Marte with a flare over Jesús Aguilar tapping the team’s fourth double of the game giving New York the 2-1 lead.

Miguel Rojas knotted it up the next inning with his sixth bomb of the season to left-center.

Despite those initial struggles, Castano locked it down from the fourth onwards keeping the Mets off the scoreboard going seven deep for the first time in his MLB career. After the Alonso double in the third, the southpaw retired 14 of the last 15 batters faced.

Scott came up with the huge stop in the ninth, fanning James McCann on the payoff pitch with the go-ahead run at third preserving the tie. Little did he know he was setting up the magical walk-off.

Wow. I mean hats off to both Nick Fortes and Daniel Castano especially. Looking at that potent Mets offense I had my doubts about his outing today. The lefty not only lasted seven frames for the first time in his career, but he also tossed a quality game. Once Alonso’s at-bat was over, Castano was in the zone. No Jazz? No problem!

Marlins Win. Say it back. pic.twitter.com/IV5v9btBdh

For him, it was a weeklong preparation blocking out all of the noise. His goal was whenever he found himself in a pickle to slow the game down going one pitch at a time. Backed by an effective defense and a dependable catcher, Castano pitched with confidence. He’s certainly had ups and downs but he might have turned a corner. And why not? Sans the blemish versus the Rockies the left-hander weaved a great game against the Phillies earlier this month. Little by little the 27-year-old is silencing doubters one game at a time, one pitch at a time.