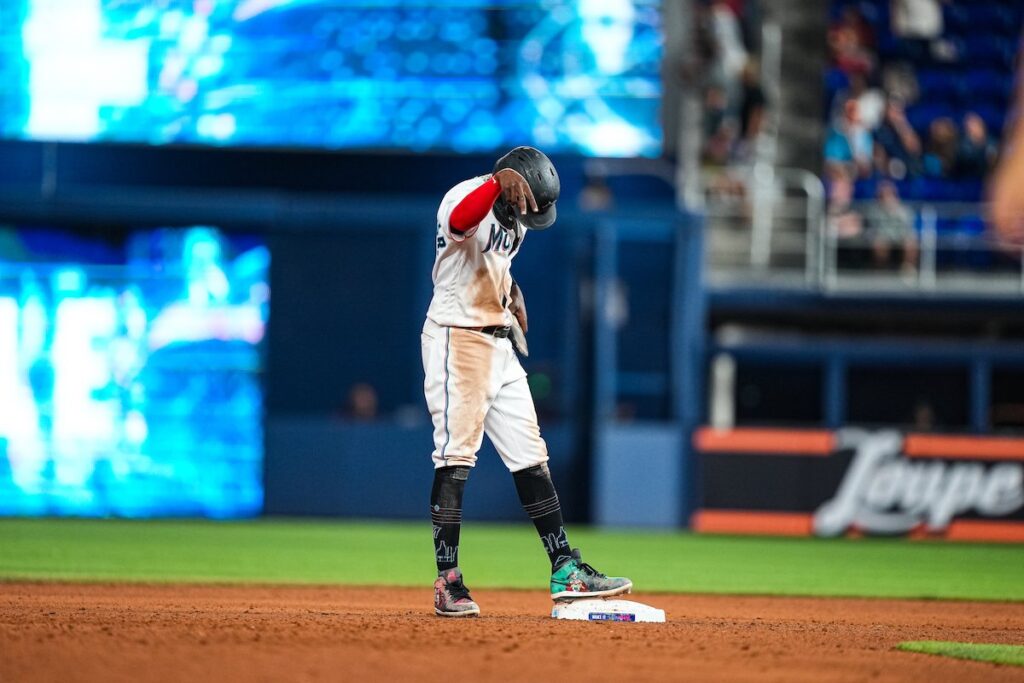 Miami, FL – The Miami Marlins have hit a slump after rattling off seven consecutive victories. Miami was hosting the Arizona Diamondbacks for game two of their three-game series and had Trevor Rogers on the mound hoping to even it up.

Game two practically mirrored game one and Miami had another comeback fall short. Just like the previous night, the Marlins lost game two 5-4 and have dropped three games in a row. The score was not the only thing both games had in common. The Marlins starting pitching and the way they scored their runs seemed like we were watching the previous game on replay.

Miami’s starting rotation has been the team’s anchor so far in the early season. In the month of April, the rotation combined for the seventh-best earned run average in MLB. Recently, however, Miami’s big three of Sandy Alcantara, Pablo Lopez and Rogers have not continued their April success into May.

In game one of the series, Lopez did not complete five innings and went 4 2/3 innings. In game two Rogers pitched 4 1/3 innings. It wasn’t the outing he nor Mattingly had in mind after Miami used five relievers the night before. Rogers struggled to get ahead of batters and throw strikes early in the count. He almost had a 50/50 split throwing strikes and balls. 42 of the 78 pitches were for strikes.

Trevor Rogers thoughts on the @Marlins offense battling back down five runs after he struggled in his outing today. @LemonCityLive #MakeItMiami #LetsGoFish pic.twitter.com/jfrjNdty8B

Arizona was able to take advantage of Rogers’ lack of command in the second and third inning. Christian Walker led off the second inning and Pavin Smith led off the third inning with solo home runs to give the Diamondbacks an early 2-0 lead.

Rogers settled down the following inning but Arizona adjusted the next time through the batting order. In the fifth, Miami’s southpaw gave up a hit and walked a batter and then Ketel Marte stepped up to bat. He was the last batter Rogers saw that night after he lined a double over Avisail Garcia in right field. The Diamondbacks now had a 3-0 lead and knocked out Rogers from the game.

For the first time since 2020, Trevor Rogers has allowed multiple home runs in a game. Both went extremely far.

Cody Poteet was brought into the game in a tough spot. Arizona had runners on second and third with their cleanup hitter, Christian Walker, up to hit. Walker continued to cause damage against Miami’s pitching and brought in both runners on base with a double down the left-field line.

The play was initially called an error by Brian Anderson. It changed later to a double and both runners that scored were charged to Rogers’ outing. All together, Rogers gave up five earned runs, walked two and struck out four.

Missed Opportunities Will Come Back to Bite

Miami’s lineup had a hard time figuring out Arizona’s starter, Humberto Castellanos. The Marlins were held scoreless through the first six innings of the game against a pitcher who has one of the slowest fastballs in the league. Miami stranded numerous runners on base but the fourth inning could have shifted the outcome if the Marlins executed properly.

Manager Don Mattingly talked about his thoughts on Rogers’ performance on the mound the @Marlins missed opportunities with runners on base shifting the momentum in Arizona’s favor @LemonCityLive #MakeItMiami #LetsGoFish pic.twitter.com/7Y6BjBQ5Be

The Marlins led off the bottom of the fourth with back-to-back singles by Jazz Chisholm Jr. and Jesus Aguilar. Miami then had the middle of the order due up with Jorge Soler, Jesus Sanchez and Garrett Cooper with no outs. None of them were able to push across a run. Just like in game one, Miami’s offense could not capitalize with runners in scoring position.

Miami’s offense could only muster up four hits against Castellanos in the first six innings of the game. He was pulled from his outing with two outs in the top of the sixth and Miami must have been thrilled to see Arizona’s bullpen. The following inning was where the Marlins starred in their own version of Groundhog Day.

Going into the bottom of the seventh, the Marlins were in a hole down 5-0. Cooper led off the inning with a walk and then Anderson was hit by a pitch with one out. After Garcia struck out, Jacob Stallings drew a walk to load the bases. It was practically Deja Vu the way the Marlins continued that inning with their two-out rally.

Chisholm Jr. was up to bat and Arizona could not pitch around him this time. After fighting off tough pitches, Jazz hit a line drive down the right-field line and the first base umpire made one of the more awkward calls this season.

For the second straight night, Jazz Chisholm Jr. has delivered a two-out, two-run double. This one got a replay review.#Marlins down 5-2 in the seventh.

The umpire down the line called a fair ball on the hit but his body was turned around due to the ball coming right at him. When he twisted his body it seemed like he pointed out that the ball was foul but Jazz thought differently.

“I didn’t hear anything, I was too in the moment to hear anything so all I can do is go off my visuals. I remember I hit the ball and I saw that it was fair in my eyes at least, I saw it and I was like looking at him [first base umpire] but he got spun around. He called it fair but turned foul. He was just like it just was a confusion,” said Chisholm Jr. after the game.

The umpires huddled up for a brief moment to discuss the play and to look at the replay to help them place the runners accordingly. They awarded Jazz with a double and two runners scored for Miami cutting Arizona’s lead 5-2. Aguilar already had one hit on the night already and did not want to have the rally end with him.

Aguilar collected his second hit of the game in almost the exact same location as the night before. Miami’s DH ripped a hard grounder between third and shortstop which led to Stallings and Jazz to score easily. Aguilar’s base hit came off of another former Marlins with Arizona now, Caleb Smith. Smith walked Soler after Aguilar’s single but got Miguel Rojas to ground out to end Miami’s rally.

The Marlins failed to tie the game in their final two innings of at-bats. They have lost the series against Arizona but can salvage it if they can win today’s series finale in an afternoon matinee. Elieser Hernandez will take the mound for the Fish and will go head-to-head against three-time World Series Champion, Madison Bumgarner. First pitch is at 12:40.