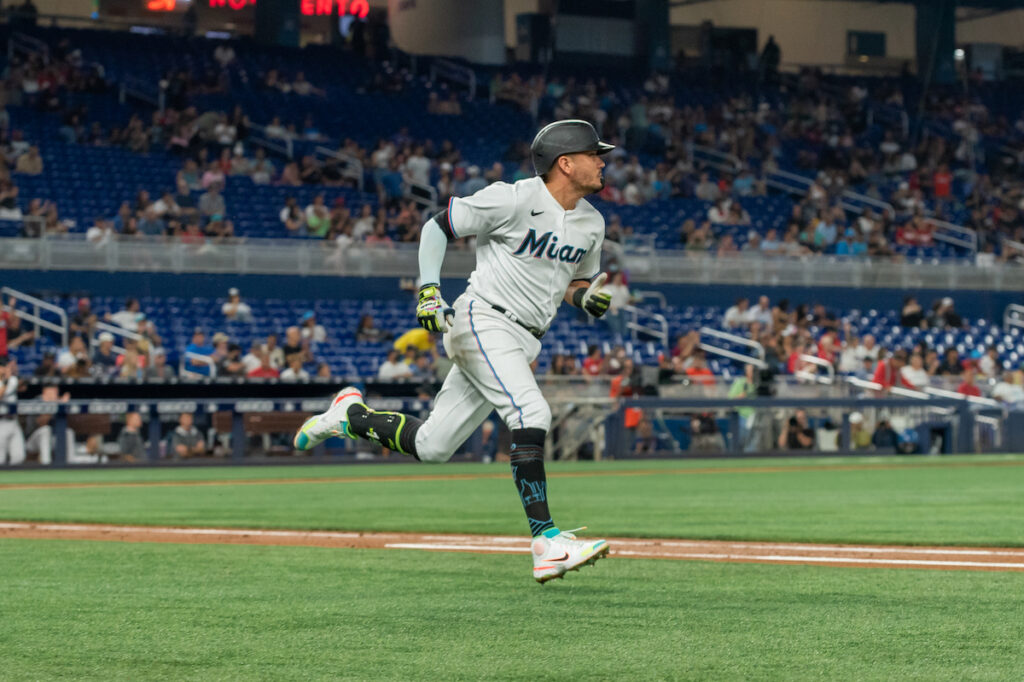 Miami, FL – The Miami Marlins had no time to rest or think about their lackluster road trip. Miami went 4-6 against the Phillies, Astros, and Mets. They could have easily come out of the road trip with a winning record, but the same issues keep troubling this Marlins squad.

Miami was back at loanDepot Park for a six-game home stand starting with a three-game series against the Colorado Rockies. With a record of 29-36, these upcoming series at home will be crucial as we near the August 2nd trade deadline. Daniel Castano was on the mound for Miami and entering his second start of 2022.

Castano took a shutout into the 7th inning at Philadelphia in his season debut. Arguably the best outing of his career. It was “Stranger Things” night at loanDepot Park and we were in for a very strange game.

Minutes away from first pitch between the @Marlins and the @Rockies in game 1 of a 3 game series. Daniel Castano will be on the mound for the Fish after the best start of his career against Philadelphia. It’s Stranger Things night at loanDepot Park! #MakeItMiami @LemonCityLive pic.twitter.com/lifWUgwvzY

Castano picked up where he left off in Philadelphia by striking out Colorado’s leadoff man, Connor Joe. The southpaw retired the Rockies in order in the opening frame and looked strong out of the gate. His outing took a turn when he had some control issues in the second inning.

CJ Cron led off the inning with a single and then Castano walked Brendan Rogers. After Randal Grichuk struck out, Castano issued another walk to Ryan McMahon to load the bases. With one out, Jose Iglesias reached base with an infield single and Cron scored for the Rockies’ first run. Castano was able to escape the inning with further damage but Colorado kept peppering the lefty for hits in the following innings.

With his RBI base hit, @JoseIglesias_SS is batting .432 with Runners in Scoring Position…

For those keeping track, that's the highest among NL shortstops😌

In the third inning, Joe would get some payback and singled off Castano to start the inning. Miami’s starter would strike out Yonathan Daza for the first out but Charlie Blackmon made it runners on first and second after he singled. Cron then flew out for the second out of the inning and Castano was one out away from escaping another jam.

On a 0-1 count, Rodgers doubled in the right-center gap and brought in Joe and Blackmon to make it a 3-0 Rockies lead. Grichuk flew out to end the third, but Colorado had figured out Castano. McMahon greeted Castano in the fourth with a leadoff home run to straightaway center field.

Things are not great in Miami right now!

The Rockies are pummeling Daniel Castano, ahead 4-0 after this Ryan McMahon NUKE. pic.twitter.com/5IwCWvnh9x

Iglesias followed up the homer with a double and Brian Serven grounded out to Miguel Rojas for the first out. After Castano walked Joe, Miami’s manager Don Mattingly saw enough for the lefthander. After 3 1/3 innings pitched, and four earned runs, Castano’s night was over.

Castano was very cutter heavy (51%) this time out.#Marlins down 4-0 in the fourth. pic.twitter.com/idxUKOcdLQ

It took a few innings for the Marlins’ offense to figure out Colorado’s starter, Ryan Feltner. The right-hander blanked Miami’s lineup for the first three innings. Feltner only gave up one hit and struck out two during that time. After Colorado knocked Miami’s starter out of the game in the top of the fourth, their offense responded well in the bottom half of the inning.

Jorge Soler led off the inning with a single to left field and then the Marlins caught a break in Jesus Aguilar‘s at-bat. Aguilar reached base on a catcher’s interference call which made it runners on first and second with no outs.

It has not been the start to a season that Avisail Garcia would like to remember. He signed a four-year deal with Miami in the offseason and has not been playing up to expectations. The right fielder looked to change the narrative of his season and he came up with the biggest hit of his early Marlins’ tenure. On an 0-2 count, Garcia homered opposite field on a 96 mph fastball.

Miami’s offense was not done yet and had plenty more to cheer when Jesus Sanchez stepped up to the plate. Feltner wasn’t as sharp with his pitches as he was in the previous innings. Sanchez took full advantage of that. The left-handed slugger took Feltner deep to center field and the Marlins tied the game up.

Willians Astudillo followed with a single to center field but was out at second when Nick Fortes reached on a fielder’s choice. Fortes caught Colorado’s defense sleeping and stole second base. With two outs, the lineup flipped over for Jon Berti. Miami’s utility man laced a single to right field. That brought in Fortes to give Miami a 5-4 lead. It was a brand new ballgame.

Jon Berti singles the Marlins into the lead as Miami has a 5-run 4th going on. pic.twitter.com/nFZUccgS71

The Rockies tied the game in the fifth thanks to a McMahon RBI double after Cron led off the inning with a double. In the bottom of the fifth, the Marlins caught another break. With one out, Aguilar singled and Garcia reached base on a throwing error by Iglesias. Sanchez stepped up to the plate with runners on first and second and singled to right field. Aguilar scored and Garcia advanced to third.

And the Marlins take the lead again!!!!

Jesús Sánchez RBI single and Miami is 🔙 on 🔝

Rojas was next in the order and he kept the line moving on an unusual play. Rojas lined a ball to right field for a single and Garcia scored easily. Sanchez advanced to third on a throwing error by Cron and Rojas was caught in a pickle between first and second base. While Rojas was being chased down, this gave time for Sanchez to score from third. Rojas appeared to be tagged out in the rundown but after a replay review, the Rockies never tagged Rojas and he stayed on base.

Miguel Rojas is too quick as he avoids this tag! @RoseRotation pic.twitter.com/GsfPtiurEn

The Marlins had an 8-5 lead going into the 6th inning with Dylan Floro on the mound. Floro got the first out of the inning but surrendered a single to Yonathan Daza. After Blackmon flew out, Cron singled to right field to make it runners on first and third with two outs.

The score remained tied 8-8 until the game reached the bottom of the 8th. Miami’s bullpen buckled down after a rocky 6th inning and gave their offense a chance to retake the lead. Fortes led off the inning with a double and advanced to third on Berti’s lineout to right field.

Cooper has been Miami’s most consistent hitter all season and he proved that again when he doubled to left-center field to bring in the go-ahead run. The Marlins weren’t able to push across any more runs that inning and it was up to Tanner Scott to close the game out with a one-run lead.

Scott has been the closer for Miami the last month and was making his first appearance since his blown save in Philadelphia. The left-hander walked Grichuk on four straight pitches and fell behind McMahon in the count. This prompted pitching coach, Mel Stottlemyre Jr., to come out and settle down Scott.

The mound visit seemed to work as Scott struck out McMahon for the first out. Iglesias grounded into a fielder’s choice and Brian Serven struck out to end the ballgame.

It was an eventful game, to say the least, but the Marlins were able to get back in the win column. Miami won their 30th game of the 2022 season and looks to take the series against Colorado with Pablo Lopez on the mound. The first pitch of the game is scheduled for 6:40 pm.