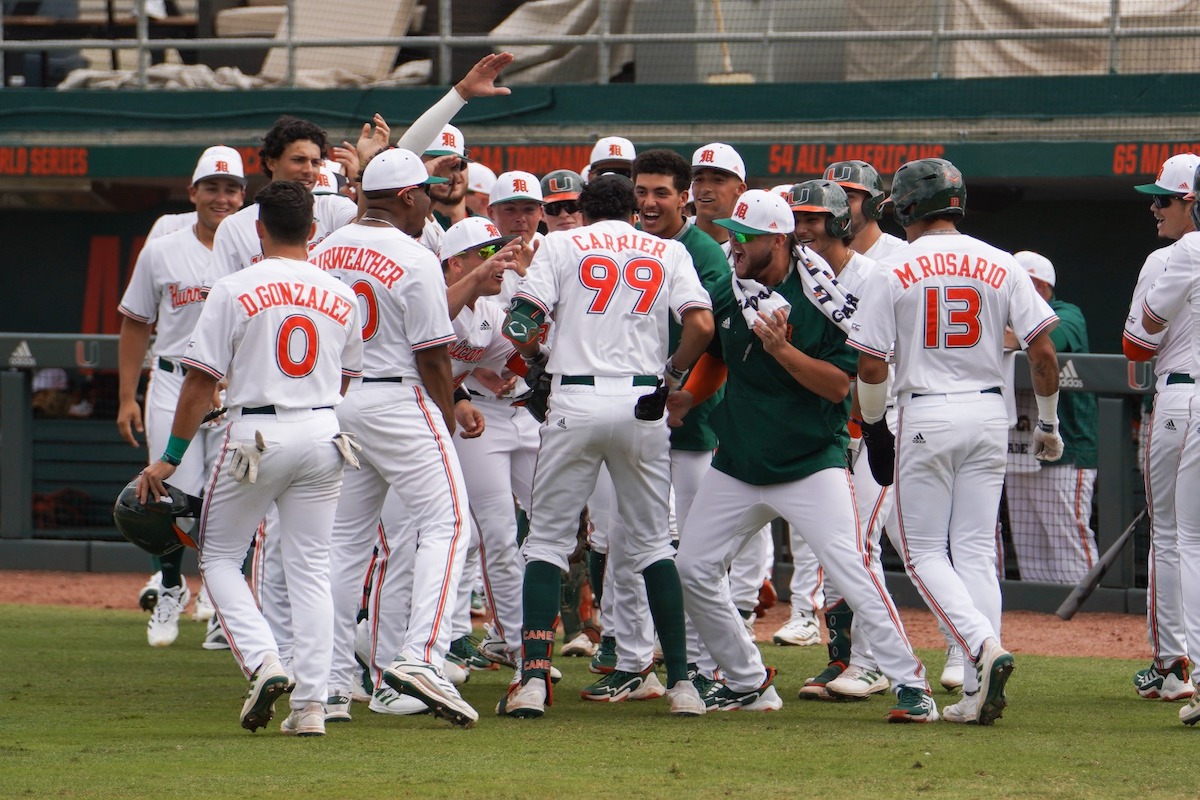 Miami, Florida – The Towson Tigers grabbed an early lead but it was all Miami after that as the Hurricanes dominated 11-1, sweeping all four games. Lorenzo Carrier set the tone in the second inning with a grand slam to left-center giving the team a 4-1 lead they would not relinquish.

GET OUT THE RYE BREAD AND MUSTARD, GRANDMA! IT IS GRAND SALAMI TIME FOR LORENZO CARRIER!!

UM outscored their opponents 45-13 resulting in a perfect 4-0 record through opening weekend.

Alex McFarlane toed the rubber against Nick Ramanjulu in his first start of the year. The sophomore tossed five innings of one-run (unearned) ball. Scattering a pair of hits, McFarlane had a very effective outing recording a new career-high six punchouts.

Alex McFarlane records his sixth strikeout of the afternoon, which sets a new career-high!

Calm before the storm

Bryce Frederick hit a sharp grounder right between the legs of CJ Kayfus driving in Chandler Castleberry who led off the game with a double. Frederick tried to steal second but was gunned down by a vigilant Maxwell Romero Jr.

The Tigers’ 1-0 lead was brutally brief.

After Mike Rosario walked to load the bases Carrier hit his second dinger of the season in the form of a towering grand slam. He finished the day going 2-for-3 with a run and five RBIs. The freshman collected 9 RBIs this weekend.

Miami kept making it rain as Romero Jr. smacked his first homer of the 2022 season and his first as a Hurricane giving UM a commanding 7-1 advantage at the bottom of the third. Carrier added another run with a standup double. The Hurricanes’ hit parade continued tacking on three more runs in dominating fashion.

On a day of several firsts, Matt Raudelunas threw his first strikeout as a Hurricane while Renzo Gonzalez got his first-ever career hit with a double.

The Canes are now 8-0 versus Towson overall.

Miami hosts FAU on Wednesday followed by a home series versus Harvard February 25-27.

No. 25 Miami is on a roll to start the season standing at a perfect 4-0. Given several upsets that occurred over the weekend, the Hurricanes are going to move up in the rankings. After struggling some opening night, UM settled in and absolutely imposed their will on Towson. It wasn’t against a team like the Florida Gators or an ACC rival. However, the overall performance was no less impressive. Shoutout to Lorenzo Carrier, Dominic Pitelli, Carson Palmquist, and Jake Garland on a great start to the season. Well done guys.

Dorian doubles are our favorite doubles!

The easy way out would be giving it to several. With his stellar performance all weekend long, Lorenzo Carrier grabs the first Gus Bus trophy of 2022.

Nobody calls out to me but if I had to give it to someone it’ll go to Jacoby Long who went hitless Sunday.