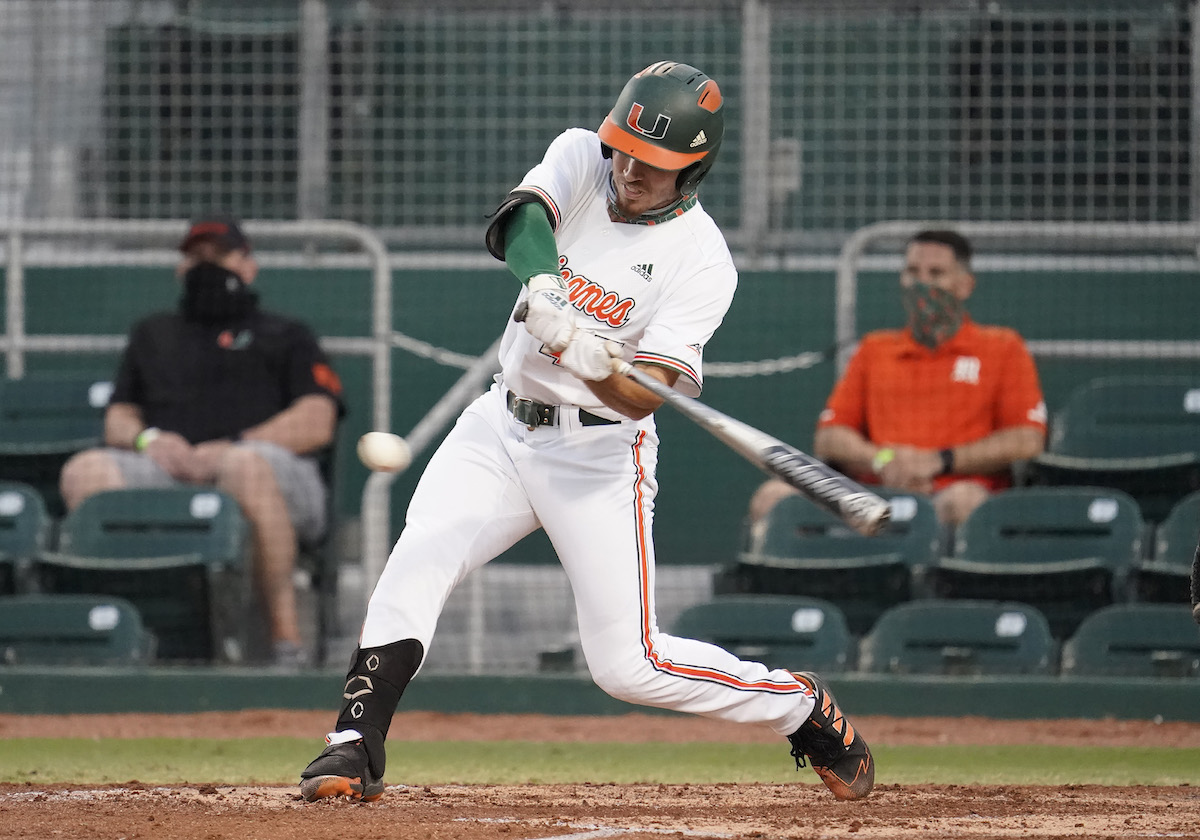 Miami, Florida – It was another ugly performance by the Miami Hurricanes as Florida State smokes UM 9-1 to clinch the weekend series. Plagued by errors and a lack of overall hitting, the Canes were unable to keep up. The Seminoles continued to strike early and often, wracking up five runs through the first four innings. Victor Mederos only gave up three hits in five frames of work but errors, both by himself and others, and a lack of run support doomed his outing.

The loss has left fans wondering how the weekend series with an in-state ACC rival could have gone so poorly. So far, the defense has been sloppy committing seven errors in two evenings of baseball. At the plate, Miami loaded the bases twice Saturday night with only one run to show for it.

Florida State kept on producing in the early game. For the second straight night, Anthony Vilar committed an error, unable to execute on a grounder in the first that would’ve ended the inning. Matheu Nelson made Miami pay with a two-run bomb over the scoreboard and into neighboring Cobb Stadium. Vilar’s mistake came back to bite them.

Some more first inning runs for the good guys!@matheu_nelson with a 2-R 💣

The Hurricanes got one back in their inaugural trip to the dish but had a great chance to score more. Christian Del Castillo came through with the clutch, bases-loaded hit to put UM on the board. He scored Jordan Lala who led off drawing a walk. Big man Alex Toral came to the plate with only one gone but both he and Gabe Rivera went down on strikes. FSU starter Bryce Hubbart nailed Toral with the fastball away and got Rivera looking using the inside heater.

Robby Martin smacked an RBI double to extend Florida State’s lead to 3-1 in the third. Mederos was able to get out of a jam but the Noles came back for more in the fourth. Taking advantage of three errors, two of them by shortstop Dominic Pitelli, the Seminoles tacked on a pair of runs to pad the lead. Miami squandered another golden opportunity at the plate that same inning when Pitelli walked to load the bases for Lala. Hubbart was able to dance out of trouble as Lala hooked his curveball into a groundout to first.

T6 | Mederos is lifted after a leadoff HBP. Alex McFarlane takes the mound for Miami with FSU up, 5-1 pic.twitter.com/cxwjTXSD0B

Logan Lacey made matters worse for the home team, hitting an RBI single to left-center making it 6-1 in the sixth. With two runners in scoring position, Nelson singled up by middle that same go, driving both home to build a commanding 8-1 lead. FSU added one more in the ninth, an RBI base hit by Ryan Romano.

Christian Del Castillo earns this one going 2-for-4 with the lone RBI way back in the very first inning. Wish we had more clutch hitting.

Every game is important but when you go hitless in a conference game against an in-state rival twice in a row, it hurts. Yohandy Morales is 0-for-8 so far this weekend and that alone is frustrating.