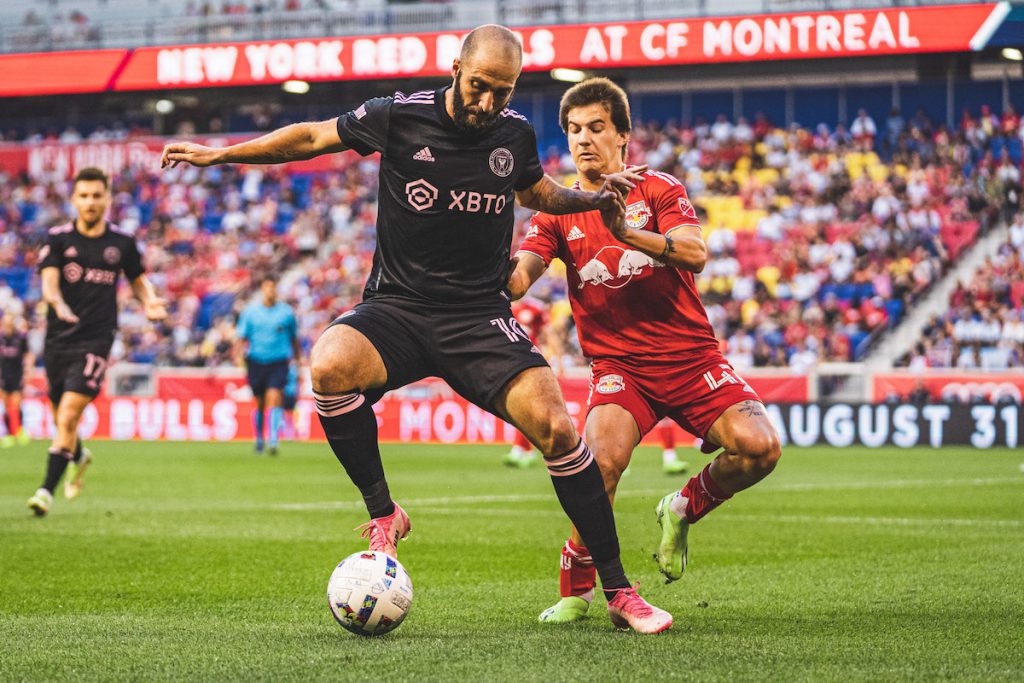 Indiana Vassilev and Kieran Gibbs were the two additions to the Starting XI for Miami against the Red Bulls.

The Herons began the game in good form, controlling the tempo and managing to move the ball around NY’s high press. Miami created two clear scoring opportunities early, but could only get on the board at the 18′ minute off a Gonzalo Higuain free-kick. Higuain’s sonic boom blast left the NY goalie simply admiring the work of art. 1-0 Miami.

Another week. Another Gonzalo 🚀 @XGLAVOZ has been trying to tell you all. #MLS #InterMiamiCF
pic.twitter.com/HlKy8f1Rxq

“El Maestro” Alejandro Pozuelo was booked a yellow card for a dangerous high challenge against Andres Reyes at the 26′, but upon VAR review he was shown the straight red card. The Herons were down to ten men in the match.

Inter Miami's Alejandro Pozuelo was shown a straight red for this.

Lewis Morgan tied the game for the Red Bulls just before the end of the first half at the 43′ minute with a crossing shot that appeared to just go under a diving Drake Callender. The teams went into halftime 1-1.

NY Red Bulls took advantage of the extra player in the second half, pressing Inter Miami into uncomfortable situations on the pitch. Daniel Edelman scored his first MLS goal at the 53′ minute to give NY the 2-1 lead. Miami could not clear the ball from their area, and Edelman beat a sleeping Gregore to a loose ball, ripping the shot into the Miami net.

Kyle Duncan was booked with a second yellow at the 70′ minute, and NY was also down to ten men.

Another NY youngster, Caden Clark sealed the deal with a goal at the 74′ minute for the Red Bulls, the Herons were cooked. Final score 3-1.

Phil Neville was animated at the press conference, he was upset about the result, but seemed more perturbed about the referee.  “Really disappointed, angry, frustrated,” was how he began his address to the media. The coach chose his words carefully, but in a sublime manner made his feelings known about referee Fotis Bazakos.

I asked Neville why Gonzalo Higuain was subbed off because it seemed like a strange move at the time, and the coach surprised us all with his answer,

Coach Neville letting me know that Gonzalo was subbed off because of a foul that caused an injury, and the foul was not called.. the play led to a NY goal, Gonzalo might not play the next game against Columbus Crew..#InterMiamiCf #LaFamilia pic.twitter.com/3tkhTjQVfI

Phil went on to say that Higuain will be a major doubt for Wednesday’s big match against Columbus Crew.  Alejandro Pozuelo will miss the match, and if Gonzalo cannot suit up, Miami will be without its two difference makers in a critical game against the Crew.

Inter Miami FC lost an important game against NY Red Bulls, and repercussions from the game can have a major effect on their playoff chase. Alejandro Pozuelo has instantly made this team better with his quality on the pitch, and he will not be available for the next game, and possibly more. Gonzalo Higuain was injured by a NY defender and could not finish the match, with Phil saying that Gonzalo was highly doubtful for Wednesday. Miami’s two DP’s and main catalyst for the recent surge will be unavailable for at least one match, and every game is pivotal.

The Herons must regroup immediately, and Phil must find a lineup that can get a result in Columbus. Bryce Duke, I imagine will be given the mantle in the midfield. The young player will have his mettle tested in a tough environment and with much at stake for the Herons.

After a superb game against Toronto FC, the Miami defense had a discrete showing against NY Red Bulls. Damion Lowe, DeAndre Yedlin, Chris McVey, and Kieran Gibbs all seemed to be having an off night. Gregore must be added to the group because, in my estimation, his level of play was subpar against NY. A team chasing a playoff spot, let alone a championship cannot afford to have poor defensive games as a unit. Defense wins championships.

I'm imagining Neville will start Duke, unless he has a surprise ..If Higuain is out also, the plot thickens #InterMiamiCF

Drake Callender recently has not performed at the high level we had seen from him earlier in the season. Drake seems to be on a run of decent, but unspectacular performances. On social media some are asking for Nick Marsman. Marsman is also a very good keeper, more experienced, and with a bigger “presence” on the pitch than Drake. All that being said, I would not make a change at goalkeeper for Miami.

Drake Callender is part of Inter Miami’s future, Marsman will possibly be gone at the end of the campaign. Callender is getting invaluable experience this season, especially in this late push for a playoff spot.  I’d stick with the young goalie until the end.

The roller coaster came to a screeching halt, and it seems that a bumpy ride lays ahead. This team has always battled, and I don’t expect that to change now. I can’t wait to see what will happen Wednesday night in Columbus.