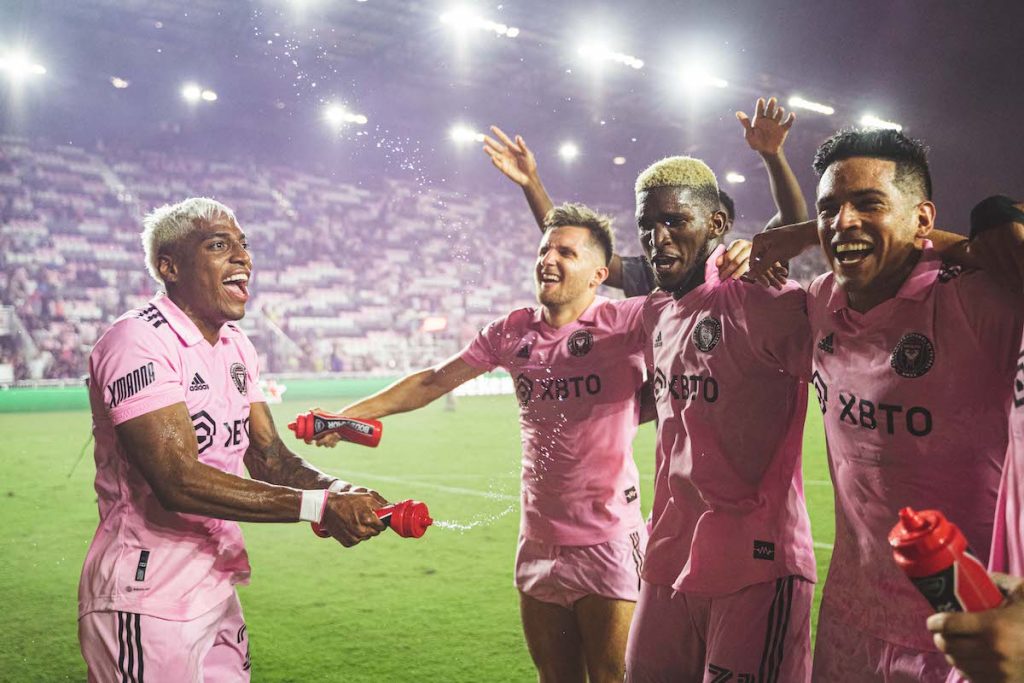 Ft. Lauderdale – Inter Miami CF netted an important win at DRV Pink Stadium Saturday night against a good Toronto FC side. The Herons won 2-1 with goals from Jean Mota and Ariel Lassiter, flying to fifth place in the playoff standings.

Ariel Lassiter and Ryan Sailor were inserted into the Heron Starting XI against Toronto FC, the two adjustments from the previous match by Phil Neville.

Early on in the first half Toronto FC appeared like the more composed squad, with Inter Miami CF looking sloppy on the ball. Eventually, Miami regained composure and scored the game’s first goal at the 24′ minute.

DeAndre Yedlin threw the ball into Gonzalo Higuain who immediately tapped the ball back to DeAndre. Yedlin then passed back to Gonzalo, who turned quickly and made a run towards the box. Higuain laid the ball off to a charging Jean Mota who blasted the shot towards goal. Toronto FC goalkeeper Alex Bono somehow had the shot go through his hands and into the net for the 1-0 Miami lead.

The lead would not last long for Miami, with Lorenzo Insigne tying the game at the 28′ minute. Insigne scored a magnificent volley off a rebound from a Federico Bernadeschi blocked shot, making it 1-1.

Just before the end of the first half at the 44′ minute Miami would regain the lead off a masterful set piece. Ariel Lassiter would score the goal to put the Herons up 2-1.

The second half saw Miami play the counter-attack and hang on for the final score of 2-1. Toronto FC tried desperately, but could not manage to penetrate the Heron net.

Despite the huge win for Miami, and the team’s climb in the standings, Phil Neville was not completely pleased with his squad’s performance. The coach feels that the team has created a high standard of play, and they fell short of that on Saturday. Phil believes that in order for them to reach their goals their level of performance must be better.

“We’ve got to play better to get where we want to get to. It’s non-negotiable.”

The Herons did not play their best game but managed to get the result. It is an indication of how far this team has come this season. Toronto FC came into DRV Pink Stadium unbeaten in their last five matches, riding high on the tails of their Italian stars.

The Inter Miami defense was able to neutralize Toronto’s attack with a tremendously gritty effort. Damion Lowe, Ryan Sailor, Chris Mcvey, and DeAndre Yedlin were solid. They say defense wins championships, and if Miami is truly a contender, then these kinds of defensive efforts must continue to be the norm.

Coach Neville also mentioned something that I have thought about for a while now. Phil said, “I do feel that something special is happening. And when you have moments like this, you shouldn’t take it for granted.” During our weekly podcast, I’ve mentioned this several times during the season. There is no empirical evidence for me to feel that way, but there is a certain vibe in the air. Anything is possible for this team, and they are building something special.

Damion Lowe, “I feel the vibe in the locker room.” Letting me know that the team has a special bond that builds the culture for championships #InterMiamiCF ⁦@HeadOfState31⁩ pic.twitter.com/3vTfnDnfLT

The Heron defense had a magnificent effort against a tough Toronto FC attack. Lorenzo Insigne and Federico Bernadeschi are high-level players that can still play in the top leagues in the world. The back four were fearless and handled the two Italian stars as well as could be expected.

Chris Mcvey is a superb defender and player. He is one of the pillars of this team, always coming through in the toughest moments. He played a wonderful game while matched up head to head with a very dangerous Bernadeschi.

Ryan Sailor cannot possibly be a rookie! The young defender has ice in his veins, performing like a seasoned veteran against Toronto FC. Miami got this pick right. Bright future for Ryan.

Alejandro Pozuelo was not brilliant against his former team but did just enough to help Miami attain a huge three points at home. Pozuelo is Batman, and he was missing Bryce Duke, his sidekick to help lessen the burden.

Here’s a little snippet of my conversation with @DukeBryce. We talked about a variety of topics from soccer, family and even life. Thanks again Bryce for your time 🙏

Inter Miami CF is hitting its stride at the perfect moment in the season. In any team sport, you want to head into the playoffs healthy and in good form. The Herons are almost at full strength and playing well. The game against Toronto FC was not brilliant, but good enough to keep rolling at home. If Miami gets in, it’s going to be fun.

This team has been put to the fire this season and has persevered. They are battle tested and will be a tough opponent for anyone in the MLS.

The roller coaster keeps climbing, and the sky is the limit for a team that believes.