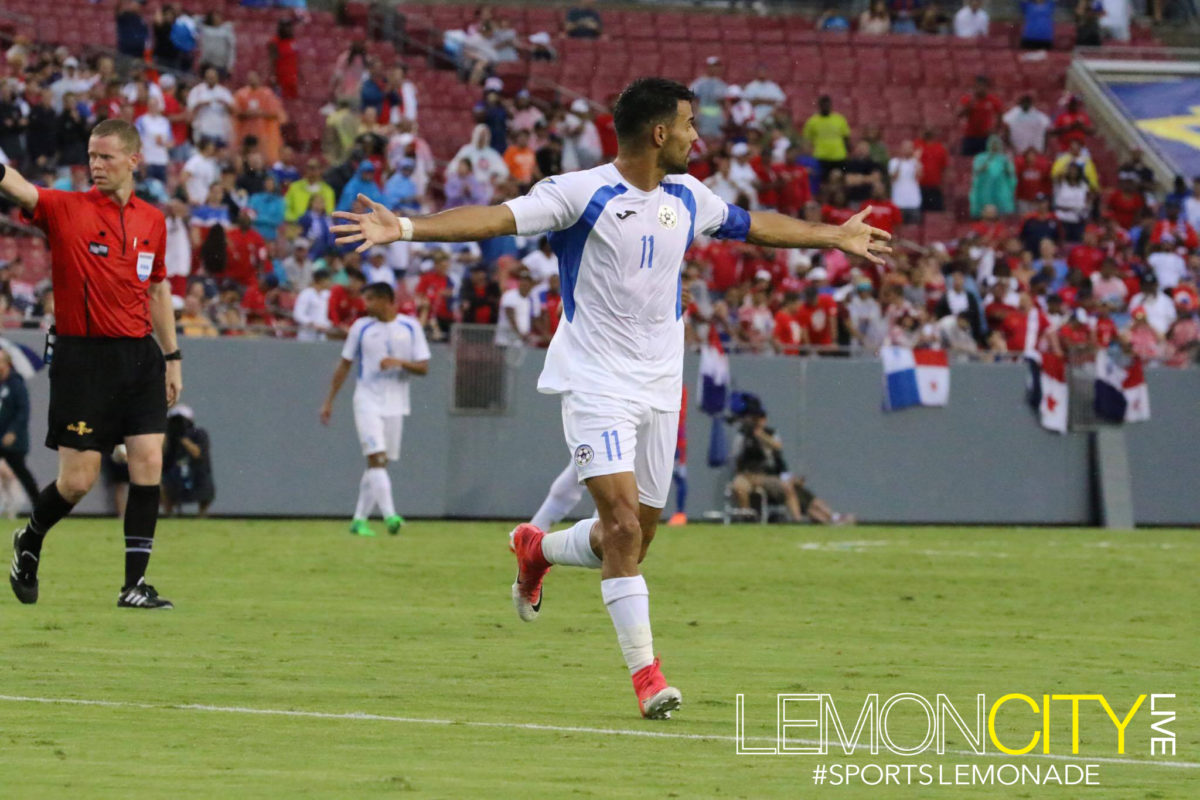 Tampa, Florida – This is the moment I’ve been waiting for… Nicaragua finally made it to a Gold Cup! Seriously, I’ve been a soccer fan all my life and Nicaragua has never been considered a soccer playing country. Baseball has been the national sport since before I can remember, so seeing Nicaragua finally climbing the ladder and actually qualify for a tournament is pretty pleasing.

El Azul y Blanco lost their first match to Martinique 2-0, which was surprising because I’ve never even heard of that Island, but I’m sure they’ve never heard of Nicaragua, so there’s that. Today, they matched up against Panama, under some pretty shitty looking Tampa, FL skies, but the weather cooperated. Panama has been a threat as of late in the CONCACAF. They were one late USA goal away from qualifying for the last World Cup (Thanks Graham Zusi), and they finished third at the last Gold Cup.

“Oh shit, Nicaragua came to play! That’s what’s up! Somebody give me some Gallo Pinto, Carne Asada, and Queso Frito!”

The match started pretty messy, with both teams giving away possession, but also creating chances. They went scoreless into the half and I’m thinking, “Oh shit, Nicaragua came to play! That’s what’s up! Somebody give me some Gallo Pinto, Carne Asada, and Queso Frito!” I was ready to sacrifice some virgins in El Volcan Masaya. That’s a volcano in a city called Masaya, where pre-colonial natives would sacrifice people to the Gods by throwing them into the volcano. Whatever works, right?! Soccer fandom will do that to you.

The 2nd half started out exactly the way I wanted it to. Nicaragua scored first, off a strike from Carlos Chavarria Rodriguez, and my blood instantly turned into Rojita, or Milca if you prefer.(Nicaraguan Red Soda) However, my celebration was short lived, as Panama would answer with a goal of their own two minutes later off a counter by Ismael Diaz. I know what happens next. Same thing that always happens to Nicaragua. In the 57th minute, Panama would score their 2nd goal by Gabriel Torres, which would prove to be the game winner.

Prodoucher FunGus is sad. @FENIFUT falls to @fepafut 2-1 after taking an early lead & is eliminated from advancing further in #GoldCup2017 pic.twitter.com/4vpEj0Eekw

It’s all good, though. I remember when the Nicaraguan players also held down daytime jobs. Now they all play professionally and can focus 100% on their craft. The sport is definitely growing in the country of my parents, but they still have a ways to go. I’m still young…ish. Maybe with time I’ll see them actually qualify for the FIFA World Cup, or advance and actually challenge The US and Mexico in the Gold Cup! Till then, I’ll brush up on my Palo de Mayo dancing, so that when it’s time to celebrate, I’ll be ready.