Miami, Florida – Edgardo Villegas and Dominic Pitelli dominated at the plate, helping UM manhandle FIU 17-1 Wednesday night. Miami’s winning streak is now at 10. The No. 8 ranked Hurricanes led from start to finish, drubbing their crosstown rivals in all aspects of the game. Villegas turned in early, finishing 3-for-4 collecting 5 RBIs and launching half of the four rockets that left the ballpark.

He wasn’t the only one going yard.

Pitelli had a great outing going 4-for-5 notching 4 RBIs striking deep in the second frame as the home team rattled off 19 hits in tonight’s lopsided contest. CJ Kayfus completed the trio as he went golfing in the fourth, clobbering the ball to right field.

Jake Garland, meanwhile, spun a solid performance working eight quality innings, punching out six. The righty was in the zone throwing 92 pitches, over half of them being strikes. The start was a boon to the bullpen giving them much-needed rest for the upcoming weekend series.

FIU’s Christian Santana was knocked out early and the bullpen was simply outclassed, sending out six relievers finding little success. The second round of the Battle for the 305 ended in a complete rout. With the crushing victory, UM improves to 23-6 overall as Florida International falls to 10-18.

The captain is mowing 'em down!

The Canes opened up the scoring in the first inning to set the tone.
Villegas put the barrel on the ball, lifting his second home run of the year for the 1-0 lead. Pitelli followed up in the next frame with his sixth homer of the season towards left-center extending Miami’s advantage 3-0.
Villegas struck again that same inning with a three-run blast to double up the Panthers. When the inning finally came to an end, UM was in command 9-0.

We repeat, Dom Pitelli is a cheat code 😎

Eight more runs would cross the plate including Kayfus’ third dinger of the year with a good night from Jacob Burke who went 2-for-2, scoring thrice.
The only defensive bright spot for Florida International was Mario Zabala making an incredible diving catch robbing JD Jones of a hit at the bottom of the 2nd. Jones would pick up his first career RBI. Other than that Miami cruised wire-to-wire. The Panthers erased the shutout at the top of the eighth when Steven Ondina grounded out to first, scoring Jayden Melendez.
Henry Wallen, a transfer from Miami Dade College, recorded his first hit as a Hurricane this evening.

This was utterly embarrassing for FIU. Talk about U G L Y. I predicted a UM victory but not a scrimmage. Pitching has always been an issue for the blue and gold and this was exploited big time. Miami took care of business and then some, as expected. Now that the Eagles and Panthers midweek games are out of the way, the real test comes this weekend in the form of No. 3 Virginia.

PSA: If you parked in the Ponce Garage, CJ Kayfus may have just hit your car!

Across town, Florida International will have to do some deep soul searching. It’s never fun losing this way no matter who you face.

Standing at 10-18, they travel to Bowling Green for a date with Western Kentucky. The Battle of the 305 is now over with the rematch being anything but competitive. Miami certainly owned this two-game home and home series for 2022.

Villegas takes this one with the lumber he was flashing.

EDDY HITS A HOME RUN FOR THE SECOND STRAIGHT INNING!

I’ll leave my tweet. This one is squarely on the Panthers.

In case you were wondering about the number on FIU's pitching staff tonight: 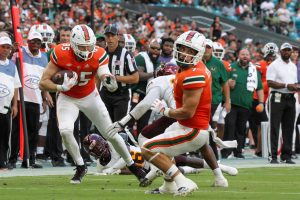 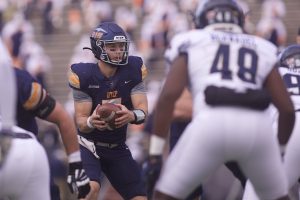