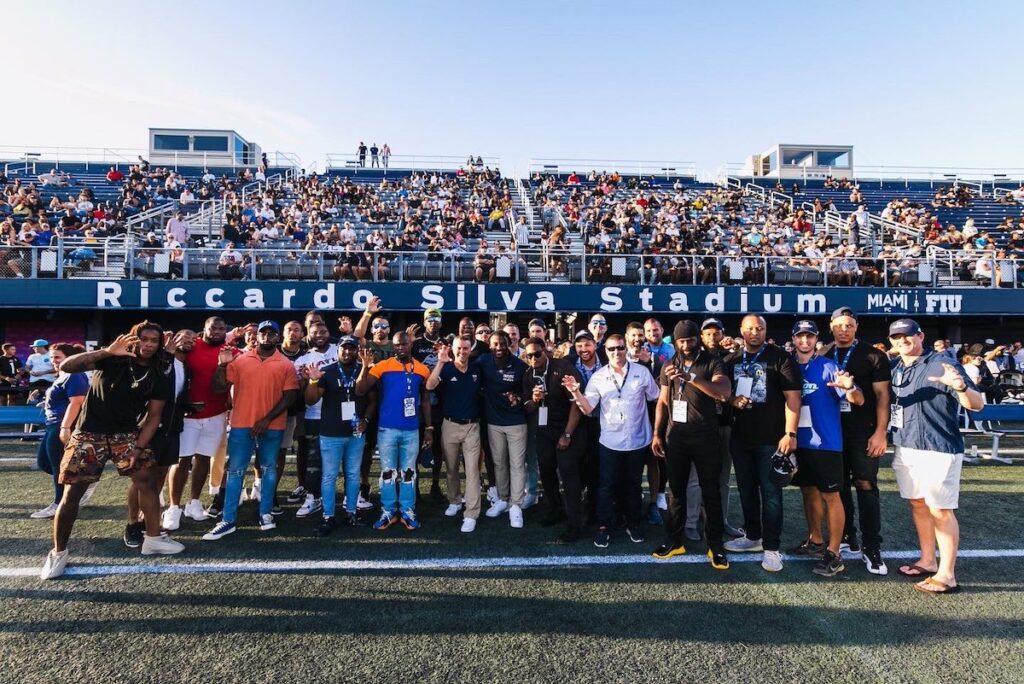 Miami, FL – A fresh start for F.I.U. football has begun under first-year head coach Mike MacIntyre. The Panthers finished off their Spring workouts with a Spring Showcase at F.I.U. Stadium over the weekend. This was a free event that had pregame festivities and Panthers fans that included alumni and former F.I.U. football players.

The showcase began at 6 pm with the Panthers storming through the game tunnel. The team started off the night running different drills with stations set up across the field. After their warm-up drills, they started doing seven-on-seven plays to finish off the first hour of the practice. There was a fun atmosphere in the stands and Coach MacIntyre was embracing the Panthers fans in section 112 letting them call plays for the seven-on-seven drills.

The remainder of the night featured in-game 11 on 11 action with the offense in the white uniforms and the defense in the navy blue uniforms. This was a great opportunity for fans to get a first look at the potential starters and backups for the Panthers.

This week of spring practices helped Coach MacIntyre get a better feel for the team and the new players. The Panthers are still building their depth and moving players to different positions. Coach MacIntyre was able to recruit 27 new players in his first recruiting class with F.I.U. 13 of those players are from Florida which stresses the importance of recruiting in the school’s home state.

The Panthers football team is still a fairly young team. With so much player personal movement this offseason, Coach MacIntyre talked about the upperclassmen and the experience they can bring.

“The upperclassmen are extremely important. But really in today’s football, you bond with the team you have at that time. We’ve been doing a lot of different things to help escalate that. To help being intentional about doing that. You can’t do it the same way you used to do it 10 years ago or 15 years ago. You have to accelerate, you have to be intentional at it and our kids have really bought into it. I think they are enjoying each other. If they enjoy each other, that helps you come to work and prepare better and do better.”

Coach MacIntyre has a reputation for turning struggling programs around and being a defensive-oriented coach. The most recent example of his efforts was at the University of Colorado when he was the head coach from 2013 to 2018. In 2016 he was the consensus national coach of the year after guiding Colorado to a 10-4 finish and the Pac-12 South Division Title. MacIntyre is a two-time national coach of the year with 32 years of collegiate coaching experience.

“It was my first time doing this and I went to Section 112 on purpose, they are great fans and had a blast doing that! It was a lot of fun!”#PawsUp pic.twitter.com/9bpZpJXdh1

Before he made his return to South Florida, MacIntyre was the defensive coordinator at Memphis. In the last two seasons, his defense lead the American Athletic Conference in defensive touchdowns and ranked 23rd nationally.

Joining Coach MacIntyre in his coaching staff is his son, Jay MacIntyre. He will be assisting his father with coaching the wide receivers. Jay and his father made it clear after the practice that there are no clear starters yet but they do have leaders already in place like junior Tyrese Chambers.

“I’ve been so impressed with Tyrese. The way he works the way he leads our guys, I’ve never really been around anyone better at it to be honest with you. And they are watching him who is getting all these accolades and him showing up every single day to work makes them show up every single day to work. When he leaves after he creates his legacy here, which he already had and has more to do, when he leaves those other guys are going to continue doing that.”

Another player that popped on Jay’s radar as soon as he arrived at F.I.U. was redshirt sophomore, Dean Patterson. He is another player Jay has looked for to be a leader. Patterson and Chambers are building a culture for future players to follow.

Spring is Over, The 2022 Season Countdown Begins

The Spring Showcase week has ended but the Panthers have a lot more work to do before the season begins. MacIntyre and his staff still need to bring in the rest of their transfer students onto the roster. The program also has room for more scholarship offers so there might be more new faces before the roster is finalized.

The Panthers’ first game of the season is on Thursday, Sept. 1 vs. Bryant University at FIU Football Stadium. They will have six home games this season including the “Shula Bowl”, against in-state rival Florida Atlantic, on Saturday, Nov. 12. The Panthers first Conference USA game will be on the road against Western Kentucky on Saturday, Sept. 24.

F.I.U. has not made it to a bowl game since 2019 and turning this Panthers program around will not be new territory for Coach MacIntyre and his staff.