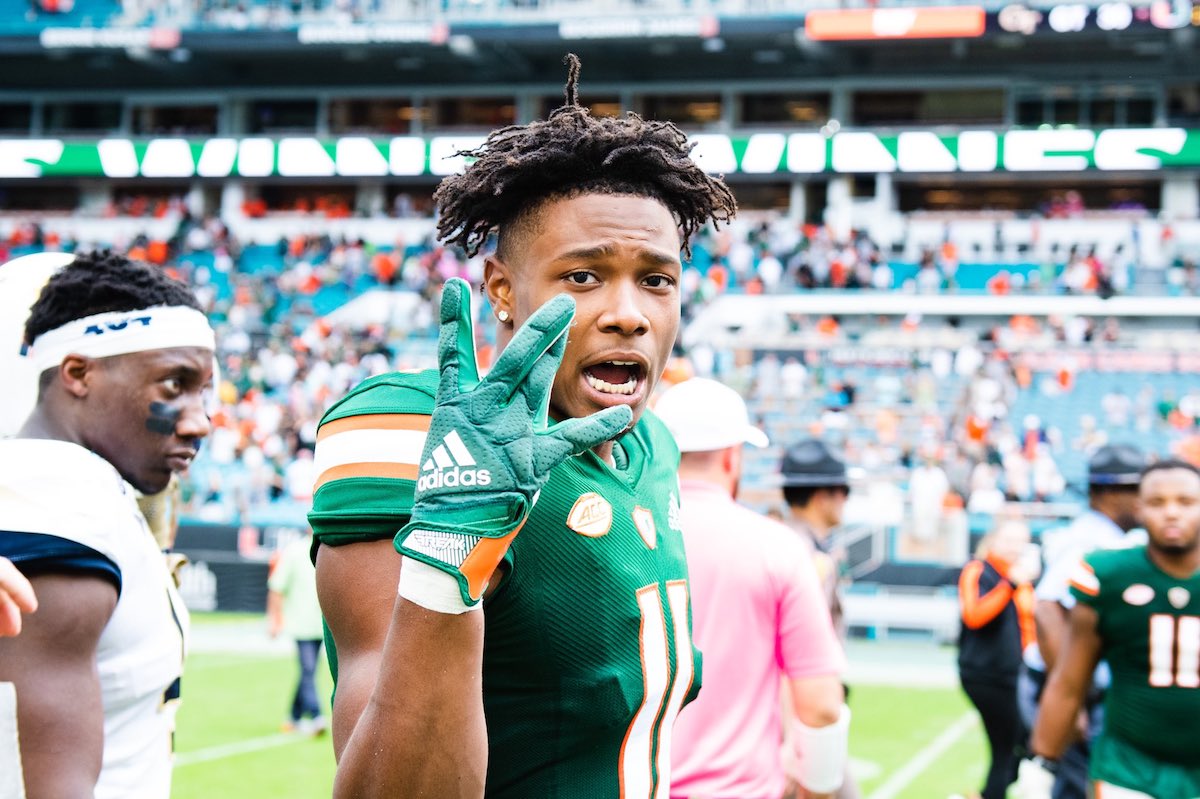 Miami, Florida –In spite of three costly turnovers the Miami Hurricanes managed to outlast the Georgia Tech Yellow Jackets winning 33-30 in a close contest. Charleston Rambo became the fourth Hurricane to accumulate 200 receiving yards in a single game, the first since Phillip Dorset in 2014. Jaylan Knighton, meanwhile, rushed for an impressive 162 yards and a touchdown.

The Canes continue their positive turnaround after going 2-4 earlier in the season, dropping their first two conference games. Defeating ranked opponents for consecutive weeks, they were seen as 10 point favorites heading into today’s bout. It was a lot closer than preferred with much of the damage self-inflicted.

Miami got off to a terrific start, stopping Georgia Tech on its first two possessions. Conversely, they scored twice on their own drives to take an early 14-0 lead. A third and 11 pass interference kept UM’s opening march alive. It eventually led to Tyler Van Dyke hitting Mike Harley in the endzone for the fantastic one-armed catch.

Mike Harley grabbed this TD with one hand 😳@CanesFootball | #ACCFootball

TVD followed up with a 35-yard connection to Rambo who ran rampant this afternoon making seven catches for 210 yards and a touchdown. This was exactly what the fans were hoping for. Watching the boys take care of business on both sides of the ball.

GT’s early struggles eventually ended. The momentum began to shift as ball handling mistakes cropped up. I’m not talking about the usual drop passes either.

Get a grip, man

The Yellow Jackets stung back with a 71-yard rushing TD by Jordan Mason cutting in Miami’s lead. A pair of costly fumbles negated any scoring chances the rest of the quarter. Van Dyke completed a pass up the middle for 37 yards but Rambo coughed it up.

UM got the ball right back with a great interception by Avantae Williams only to lose it again in another turnover. This time the pass was to Elijah Arroyo catching it at the GT 33 only to surrender possession ending the drive.

It wasn’t just the fumbles hurting the team. The defense failed to contain explosive runningback Jahmyr Gibbs. Gibbs rushed for a 29-yard score to tie it 14-14 in the second quarter. He ultimately found the endzone twice generating almost 140 combined yards by the end of the day. It’s safe to say they stopped him about as much as Rambo.

Yet ANOTHER fumble occurred. Knighton apparently had a bad case of butterfingers midway through the second quarter, allowing the football to be stripped right out of him. Not only did Georgia Tech recover the ball, but they also returned it for a TD for their first lead of the afternoon.

These miscues paled in comparison to what happened later.

After scoring in the fourth quarter, Miami’s two-point conversion attempt was a complete disaster. Van Dyke’s pass intended for Will Mallory utterly failed resulting in Juanyeh Thomas intercepting the throw. He ran all the way back for a DEFENSIVE PAT. You read that right.

At least the defense finally came through late game. On third and 15, Yellow Jacket quarterback Jeff Sims was sacked by Zach McCloud forcing Georgia Tech to punt it away. Miami took over with 2:47 remaining allowing them to eat up much of the clock securing the W.

Well, I think coach Manny Diaz can breathe easy. The three consecutive quality wins effectively ended any notion of him getting the ax during the season. In the wake of these successes, fans will be scoreboard watching from now on. That’s right, Miami can still legit win out in the coastal. Standing at 5-4 (3-2 ACC) the Hurricanes actually have a shot. Three games remain and the next two will be challenging.

Playing Florida State on the road is by no means a sure thing and then there’s Virginia Tech. The Hokies are their toughest opponent left on the schedule. Given how wild (and disappointing) this season has been, the Canes can easily win all three, lose all three, or something in between. This significantly depends on their signal-caller.

Looking over to Van Dyke, the quarterback passed for 389 yards including three touchdowns marking a very productive day.  His numbers were great but on several occasions, he missed his target entirely. It’s good to remember he’s still a work in progress. The freshman has really stepped up and if Van Dyke continues to grow as a player there will be a lot of hype at the position for 2022.