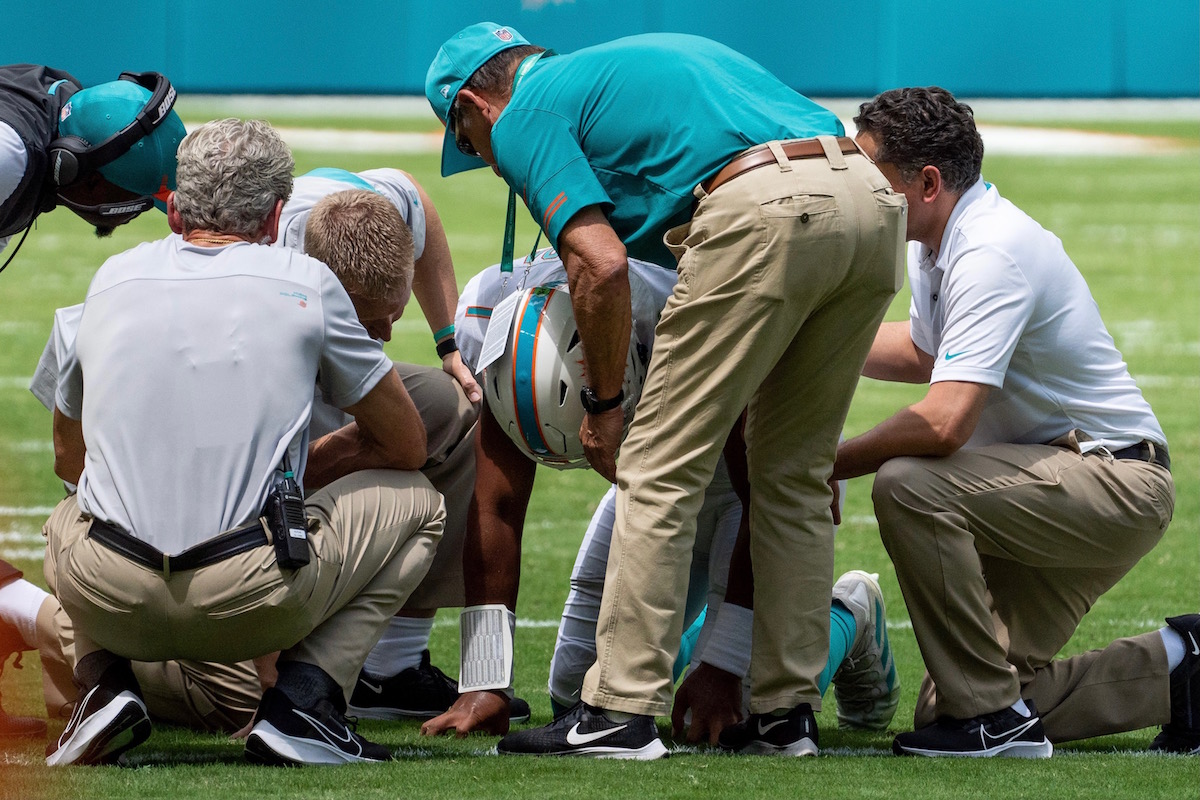 Miami Gardens, FL – The Miami Dolphins hoped to start the season 2-0 and take a substantial grasp over the AFC East. Meanwhile, the Buffalo Bills, a heavy preseason favorite to win the division, looked to avoid starting 0-2. However, an early Tua injury derails that outcome, as the Dolphins fall to Buffalo, 35-0.

Miami got off to a terrible start. Buffalo scored on their first two drives, taking an early 14-0 lead. In addition, on The Fins’ 2nd drive, Tua took a hard hit, walked off the field under his own strength, but was eventually carted back to the locker room. Apparently, he suffered a rib injury, and his return was questionable. He was eventually ruled out later in the game. According to Matthew Betz, “X-rays reportedly negative for fracture but will be evaluated via MRI tomorrow.”

A negative X-Ray is a best-case scenario for Tua. Monday’s MRI will give more clarity to the extent of the injury. #FinsUp https://t.co/wY9tGStOlz pic.twitter.com/oU7MflpCVG

Consequently, Jacoby Brissett took over under center and didn’t take long to throw an interception. However, Brissett is not the reason Miami lost this game.

Miami’s Offensive Line has been a revolving door for a number of years. As a consequence, the Fins’ O-line has never had time to mesh and build a rhythm. Ryan Tannehill suffered the brunt of that for seven years and now Tua is on the same boat.

Fins G/T Robert Hunt doesn’t seem to agree with that train of thought though. Postgame, I asked him “How long does it take guys in the O-line to mesh so they can work as one unit, and do you see you guys are headed in that direction?” He answered, “I want to say, I mean, it doesn’t really take time. You have to work with the guys, trust the guys next to you. We’re a young line, trying to improve. That’s no excuse. We can’t keep saying that shit. We working to be better, we will be better.”

That being said, Brissett played a decent game, even though Miami put up a goose egg. He played under pressure for more snaps than snaps played in a clean pocket (26/22). On top of that, when we made an accurate pass, guys were dropping balls. DeVante Parker dropped a ball in the endzone that would’ve brought Miami to within one possession of the Bills. It went right through his hands. Albert Wilson seems to still be shaking off the rust from missing all of last season, dropping two passes today that were placed right in the breadbasket.

Adding insult to literal injury, both Jaylen Waddle and Jakeem Grant fumbled in the worst possible moments, giving Buffalo the type of field positioning that you can’t buy. Grant would later leave the game with an apparent ankle injury.

This man is a monster.@Iamxavienhoward collects his 1st INT & his 2nd takeaway of the season.
This extends the @MiamiDolphins’ takeaway streak to 24 consecutive games, currently the @NFL’s longest streak.
📸: @sosafins #FinsUp pic.twitter.com/TVR4KdtZrE

The defense wasn’t great, but the offense couldn’t stay on the field long enough to give the defense a chance to catch their breath. Andrew Van Ginkel and Emmanuel Ogbah split the lone sack over Josh Allen. Meanwhile, Xavien Howard came away yet another takeaway, this time an interception in the 2nd quarter. His first of the season. Earlier in the game, Jerome Baker caused Miami native, Zack Moss to fumble, recovered by Safety, Brandon Jones. That fumble extended Miami’s NFL-leading streak to 24 straight games with a takeaway. The defense held on for as long as they could.

Miami let the game get away from them in the 2nd half. In all, their inability to develop any rhythm on the offensive side of the ball kept the defense on the field. Miami won a few close games with the defense scoring points last season, but that’s unfair to expect on a consistent basis. Also, quite frankly, it’s not the defense’s job to score. Any defense that stays on the field long enough will eventually get exposed.

If the Dolphins can’t figure out their offensive line woes it’s going to be a very long season.

Next up, Miami travels to Sin City to take on the 2-0 Las Vegas Raiders. Kickoff is set for 4:05 PM. 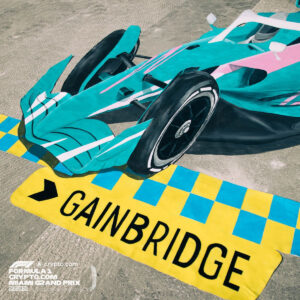 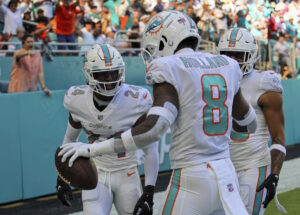