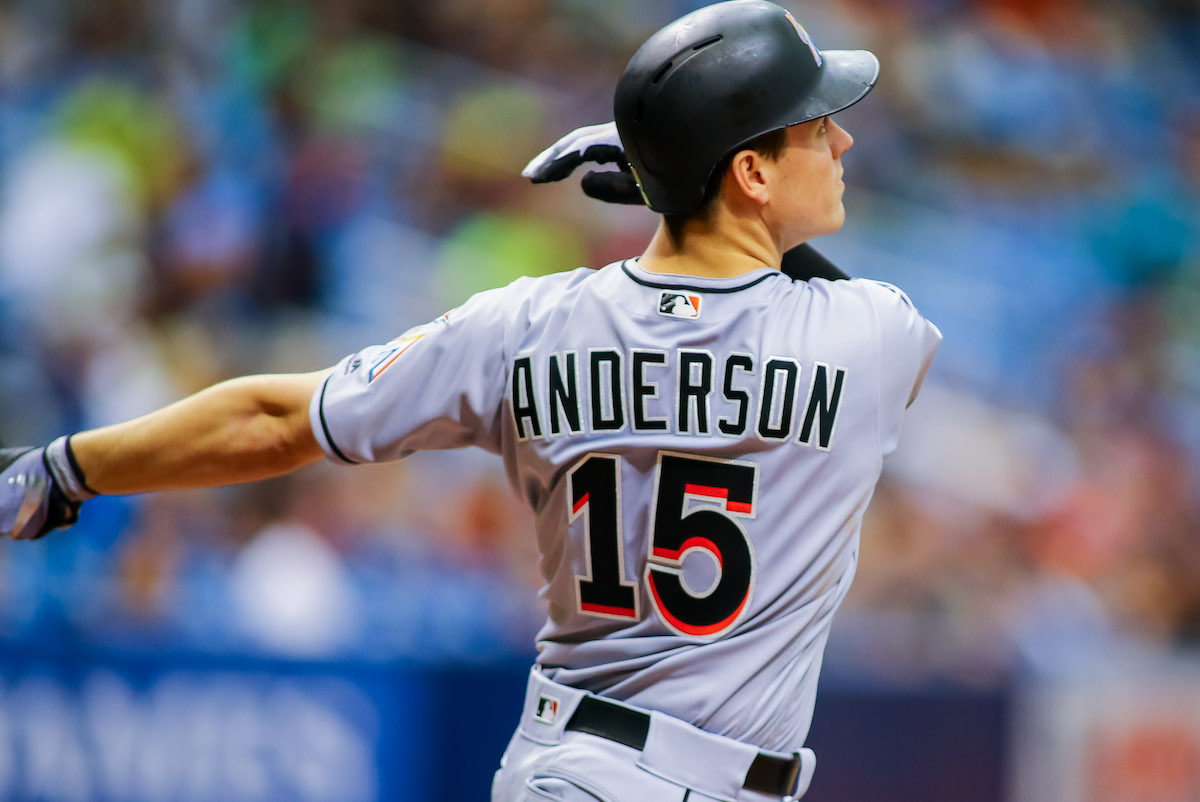 Well that could’ve gone better. The latest slate of games were a mixed bag, revealing our usual weaknesses although one amazing thing did come of it. More on that in a bit, for now, we’ll recap our recent performances (Or lack thereof) and the two trades we conducted. Off we go!

The Marlins had a rough go in the first half of the series against their division rival. By rough go, I mean getting pummeled by the Nationals as Washington cranked out a freakish 19 runs in two games. Trea Turner nearly hit for the cycle, coming up a double short. Dan Straily lasted nearly six innings giving up three earned runs, including two homers off Turner and Juan Soto. Things got progressively worse as Adam Conley coughed up three additional runs in relief while Marlins rookie Ben Myer got tattooed for four more in the ninth. Stick a fork in em, 10-3 Nationals. The second game saw more of the same as Max Scherzer dominated the Marlins on his 34th birthday (Happy Birthday indeed Max). Scherzer nearly pitched a complete game, tossing eight frames and thoroughly handcuffing the offense, holding them to a mere run on three scattered hits. The bullpen struggled to stem Washington’s offensive output after the starter Pablo Lopez went 5 and 2/3rds, allowing four runs. Javy Guerra was torched in the eighth, ceding five scores, putting the game out of reach. The NL-East foe produced a total of 16 hits in their 9-1 win.

Trevor Richards turned it around with a terrific outing in game three, allowing just three hits in six innings of work. The bullpen largely got their act together and kept the Nationals off the board for most of the night. Kyle Barraclough, however, blew his fifth save of the year as Daniel Murphy singled to right to bring in the tying run. Tie game in extras? No problem, J.T. Realmuto’s got your back. With the bases juiced and no outs, Realmuto kept it real as he hit a pop fly to right field. It dropped right near the foul line for the walk-off single. It was his third career walk-off as Miami emerged on top, 2-1.

Walk off Win for the @Marlins pic.twitter.com/n1pN1B74ib

The Marlins continued their pitching dominance in the series finale. Jose Ureña tossed a beauty, holding the Nationals to one hit after six frames. The bullpen trio of Conley, Ziegler and Steckenrider kept up the bullying, contributing towards the shutout. Already ahead 2-0, Miami had a big three-run fifth that included an RBI-single from Martin Prado and an RBI-Double from Miguel Rojas.  5-0, Marlins. After stumbling through the first two games, the Fighting Fish regrouped, splitting the series.

The series against the Braves would prove to be a very wet and disappointing affair. In the opener, Miami struggled both at the plate and on the mound. Offensively the team went 0-for-10 with RISP while Wei-Yin Chen gave up five runs in five innings. The Marlins did bolt to an early 2-0 lead but it was very short lived. Atlanta responded with two runs in the second and third, ultimately winning 5-3.

Oh, it gets worse.

Ronald Acuna Jr., Nick Markakis and Ender Inciarte went on a combined tear, helping to knock out Straily before he could complete the fourth inning. Straily surrendered eight runs (Five earned) on 11 hits, forcing the bullpen to step in. Meanwhile, Braves rookie Kolby Allard won his first career start, getting plenty of run support. Despite Realmuto’s 14th home run, Atlanta dominated the rain-delayed game, winning 11-6. The rubber match was a washout, August 13 is the makeup date.

The trade deadline came and went and as predicted two Marlins were shipped out: Cameron Maybin and Brad Ziegler. I figured Ziegler would get traded but I thought the other player would’ve been Kyle Barraclough or Adam Conley. I’ll do Ziggy first.

Ziegler returned to the Diamondbacks (He pitched for them from 2011-2016), capping off an interesting tenure with Miami. He’ll be adding more depth to an Arizona bullpen looking to make a run for the postseason. Starting the season as the team’s closer, the 11-year veteran struggled before being removed from the position at the end of May. After being reassigned to the setup role, the submariner flourished. Since June 5th, he was tied for second among major league relievers with an ERA of 0.64. His success garnered both looks and interest. In exchange, the Marlins got minor leaguer Tommy Eveld who was recently promoted to Double-A Jackson. The 24-year-old righty is also a native of Coral Springs and played college baseball at the University of South Florida. Prior to his promotion, he made 32 appearances this season for Single-A Visalia, posting a 1.24 ERA, converting 10 of 12 save opportunities during that span. Onto the other trade.

It looks like @teveld will be returning to the Marlins after all these years!
⚾️⚾️⚾️ pic.twitter.com/TGD09DJV81

Cameron Maybin was sent off to the Mariners for minor league infielder Bryson Brigman and international slot money. Brigman was considered the No. 19 prospect within Seattle’s farm system, according to MLB Pipeline. The 23-year-old hit .304 (116 for 381) with 13 doubles,  seven triples, two home runs, 38 RBI, 37 walks and 15 stolen bases in 98 games with High-A Modesto. He was a third-round pick in the 2016 draft out of the University of San Diego. Now that he’s with us, the shortstop is now playing for the Jupiter Hammerheads.

The Marlins acquire infielder Bryson Brigman and international bonus pool money from from the Seattle Mariners in exchange for Cameron Maybin.

With his return to Miami at an end, Maybin hit .251 including 12 doubles, three round-trippers, 20 RBIs and a .339 OBP in 99 games for the Marlins. Maybin will aid his new ballclub with his experience and his ability to play anywhere in the outfield. He’s also a plus side defender which never hurts. Now for my two cents.

The Ziegler trade I liked, we got a young player for a 38-year old who was going to be a free agent after the season. Considering the ballclub’s history with an immensely frustrating bullpen, Miami could always use more young guns in the farm with the hope of at least one of them having big league material.

The Maybin trade is a little harder to grade since Brigman isn’t necessarily some stud. He could be but this is a long-term project that may or may not pan out, as with all minor leaguers. His numbers look nice and in a season or two, his services may be called upon. However, if we’re looking for a shortstop in the near or midterm, we’ve got Peter Mooney and of course, JT Riddle. These two trades I’m fairly content with, the guys we exported were serviceable and will undoubtedly remain useful for their respective teams, for their experience if nothing else. On our end, we bolstered the cupboard for future consideration. There’s also the mula for the international spot that was previously mentioned. Time will tell how these moves turn out.

One very good and inspiring thing came out of the rain-soaked series in Atlanta. For those of you who don’t know, on Tuesday at the top of the ninth inning, a man named Isaac Galloway finally realized his dream. 10 years ago, the then Florida Marlins selected an 18-year-old from Rancho Cucamonga, California, in the eighth round of the draft. He came in with the same class that included Eric Hosmer, Buster Posey, Jason Castro, Lance Lynn and Justin Smoak to name a few. For many, there’s that feeling that you finally made it but that’s not always the case. Many players find there’s work to be done and for a lot of MLB hopefuls, they never quite make it to the big show. Galloway figured his day would eventually come, but as the years wore on, to many, it never would. Until now.

947 games and a TON (3,400+) of at-bats later, his opportunity finally arrived. With Maybin gone and Lewis Brinson on DL, he got the call. Even getting to the stadium was hard. His flight got delayed due to inclement weather and there was a lot of traffic on the way to the ballpark due to an accident. Even with the nearly 90-minute rain delay, Mr. Galloway didn’t arrive until about the halfway point of the game. Yet there he was at the top of the ninth, standing in the batter’s box living the dream he fought so hard for. He hit a sharp grounder up the middle that was scooped up by Braves shortstop Dansby Swanson, he beat the throw. A hit. Galloway got his first ever major league hit.

.@Marlins Isaac Galloway on his #MLB debut after 10 years in the Minors. #JustGettinStarted pic.twitter.com/j8GI0WEgsE

This is an excellent example of perseverance. How many people would have kept the faith? Kept on fighting, day in and day out? Week in and week out? Heck, year in and year out? Galloway never let the dream die. It took a decade but the call finally came, it’s moments like these that make watching baseball, and sports in general, worth watching. An individual overcoming a mountain of adversity and persevering before our very eyes. The experience transcends sports, he really did show us and remind us that while it might take a long, long time to achieve the goals we set out for ourselves, once we get to where we want to be… it’s definitely worth it. If any of you guys ever have doubt creeping into your mind and/or the fear of failure gripping your heart, look to this guy.

THAT is the beauty of Baseball. After an 87-minute rain delay, in a near-empty ballpark, after midnight, in the 9th inning of a crummy loss in Atlanta, you get rewarded with Isaac Galloway’s first #MLB hit in his first at-bat after 11 years in the minor leagues. Nothing like it.

Until next time, stay frosty folks.