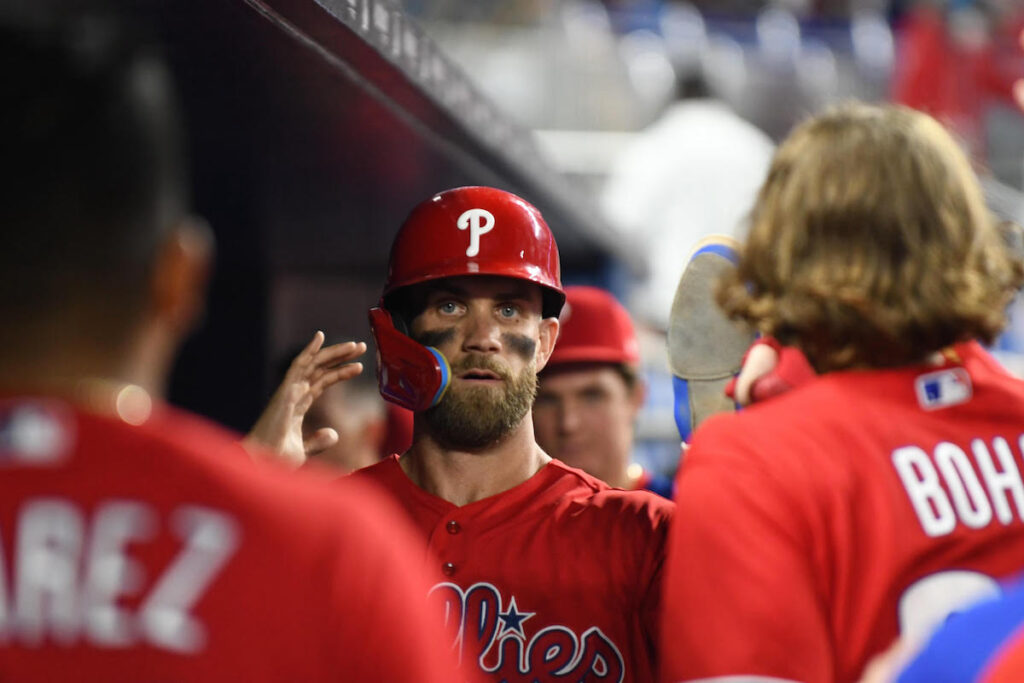 Miami, FL – That was not the performance Trevor Rogers had in mind going into last night’s game against the Philadelphia Phillies. It was a night he would like to forget immediately as the Miami Marlins dropped game three of their four-game series against Philadelphia. Miami won the first two games behind exceptional pitching performances by Sandy Alcantara and Pablo Lopez. Miami’s offense continued to show flashes of improvement in the homestand scoring seven runs the previous game.

Trevor Rogers moves to 0-2 on the season and his ERA will increase tremendously after giving up seven earned runs. Rogers started off the game on a good note striking out Philadelphia’s leadoff hitter, J.T. Realmuto. That strikeout would be a milestone for the young southpaw.

Trevor Rogers struck out the first batter of tonight's game, marking his 200th career strikeout. He became the first left-hander in MLB history to strike out 200 hitters in his first 34 career games (all coming as starts) while maintaining a career ERA under 3.25.

That would be the only highlight of Rogers’ night. The 2021 All-Star was not able to get out of the second inning and struggled with his command walking four Phillies. He only recorded five outs and it took him 40 pitches just to get through the first inning. There will definitely be a lot to adjust and work on between today and Rogers’ next start. Miami’s pitching coach, Mel Stottlemyre, is no stranger to getting a young pitcher back on track.

It’s always hard to find the bright side in a lopsided loss. The Marlins did have some firsts this season with a couple of their newcomers. In the bottom of the fifth, Jorge Soler blasted a two-run shot to left field. That home run was the first of the season and finally had the Marlins on the scoreboard.

Soler flashing his power was a good sign to see for Marlins fans since Manager Don Mattingly has been using Soler in the leadoff spot. If Soler can be productive at the top of the lineup, then that will make Miami’s lineup even more dangerous with the other power hitters that follow him in the order.

He just gave us flashbacks.

Avisail Garcia is one of the sluggers that follows Soler in the lineup and he was finally able to get his first Marlins home run. Unfortunately, the Marlins had no runners on base for the home run but Garcia showed why Miami dished out the money in free agency to sign him.

AVISAIL GARCIA GOT ALL OF THIS ONE @AvisailGarcia #MLB | #Marlins | #MakeItMiami

Miami signed Garcia to be that middle-of-the-order power hitter to complement Soler and Jesus Aguilar. If Garcia and Soler can get their hitting on track, then Miami’s lineup will have multiple power threats throughout the order. This was not a luxury Miami had the last few seasons.

Elieser Hernandez will be on the mound for the Marlins tomorrow in the series finale. Miami will look for their first series win of the 2022 season. It will not be an easy task for Miami as they will go up against flamethrower Zach Wheeler. If the Marlins want to compete in a tough NL East division, these are the series they need to close out and win.

And that's the ballgame folks! The @Marlins drop game three of the series 10-3. Long night for the bullpen, hopefully Elieser Hernandez can eat up some innings in the series finale tomorrow. Miami now 3-5
Tonight's Attendance: 13, 412. @LemonCityLive #MakeItMiami #LetsGoFish

Cody Poteet was the unsung hero of tonight’s game. Poteet pitched 3 1/3 innings after Rogers’ short start. That helps the Marlins’ bullpen tremendously as they will be hosting a tough series against the St. Louis Cardinals starting on Tuesday, April 19.

If the Marlins want to continue to improve and compete in a tough NL East division, these are the series they need to close out and win.