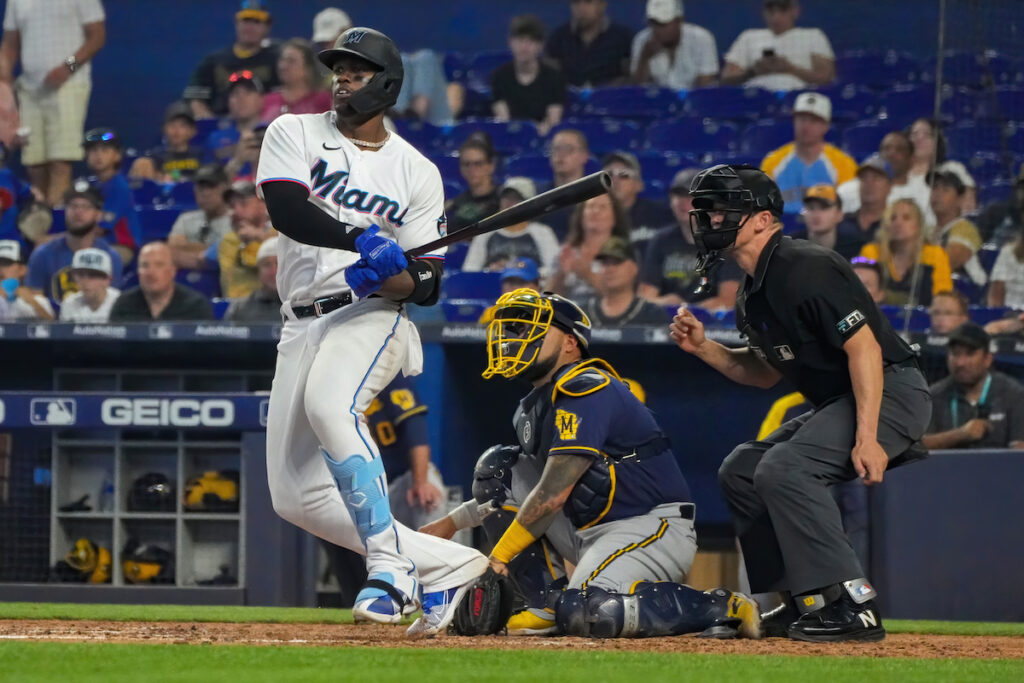 Miami, Florida – Despite a good initial start from Elieser Hernandez, the Milwaukee Brewers rally with four runs in the fifth to ultimately win 7-3. Hernandez held the Brew Crew to a run before things fell apart at the back end of his second trip through the opposing lineup.

The righty gave up back-to-back home runs eventually getting chased off the mound.

The Marlins generated very few opportunities at the plate with the bats going silent from the sixth inning onwards. They were held to just five hits going one-for-six with runners in scoring position. Among the biggest disappointments in today’s effort one name comes to mind: Jesús Sánchez. The 24-year-old went hitless striking out four times for the ignominious golden sombrero.

A blast from Jace!

Hernandez ran into some trouble to start the game. With a runner on first Christian Yelich hit a hard grounder into the shift but Brian Anderson was unable to glove it. The E-5 came back to bite them. Luis Arias hit a sacrifice fly to center field scoring Willy Adames.

After getting outright K’ed in the first, Miami threatened to score in the second.

Avisaíl García reached base due to a very errant throw from Mike Brosseau followed by a double to the left side courtesy of Anderson. Erik González drew the two-out walk to load the bases setting up the catcher Payton Henry. The 24-year-old switched into clutch mode knocking the two-RBI single to hand Miami the lead.

Jorge Soler went yard again this weekend, pounding one to left field in the third for his seventh dinger of the year. Milwaukee responded with some muscle of their own in the fifth launching back-to-back homers. Jace Peterson got a hold of Hernandez’s 0-2 changeup to get a run back and Kolten Wong belted the payoff pitch tying it 3-3.

The Brewers added two more via RBI singles from Rowdy Tellez and Omar Narvaez capping off a four-run fifth. Tellez struck again with a bomb in the seventh for insurance before Luis Urías lined in another during the eighth. The loss pushes Miami to 15-19 on the season.

The year I became a Marlins fan

And so the ’97 Anniversary Weekend comes to a close. While it’s certainly disappointing the Fish blew the series, I won’t let it cloud the special event. Elaborating some more upon last night’s piece, the year I became a true Marlins fan was actually 1997. At that time I was just starting little league baseball, my first year of three. That’s also when my old man had a renewed interest in the franchise. Back in 1993, he took me to Joe Robbie Stadium to watch my first ever baseball game.

We got tickets in the nose bleed section and considering my fear of heights, to say I was nervous on those big escalators was an understatement. Who did we play? The Atlanta Braves. We won but the seeds of hate were sown. I revisited the stadium a few more times seeing the Montreal Expos, Cincinnati Reds, and Colorado Rockies. We never lost when attending in ’93. In one of those games, Rene Lachemann signed my little league glove. I switched to another and never used it again.

Alex Fernández joins the booth and speaks about the 1997 season and battling to help the Marlins make it to the playoffs and clinch a NLDS win!

My dad stopped following the team after the 1994–1995 Major League Baseball strike. The reasons why remain an unknown since I never asked. Regardless, dad reconnected with the team and watched them play almost nightly always arguing with the tv. When we drove home from visiting my cousins in Hialeah on the weekends, the legendary Felo Ramírez accompanied us in the car. He was big on pitching so his favorite players were Alex Fernandez and Liván Hernández.

By the July of that year, I was hooked. The rest, as they say, is history. Looking back there were two critical seasons that played a huge part in developing my love for the sport: The ’97 Marlins and the 1998 home run chase between Mark McGwire and Sammy Sosa. It doesn’t take much to guess which is my happier memory. Of course, it’s the Fish man.