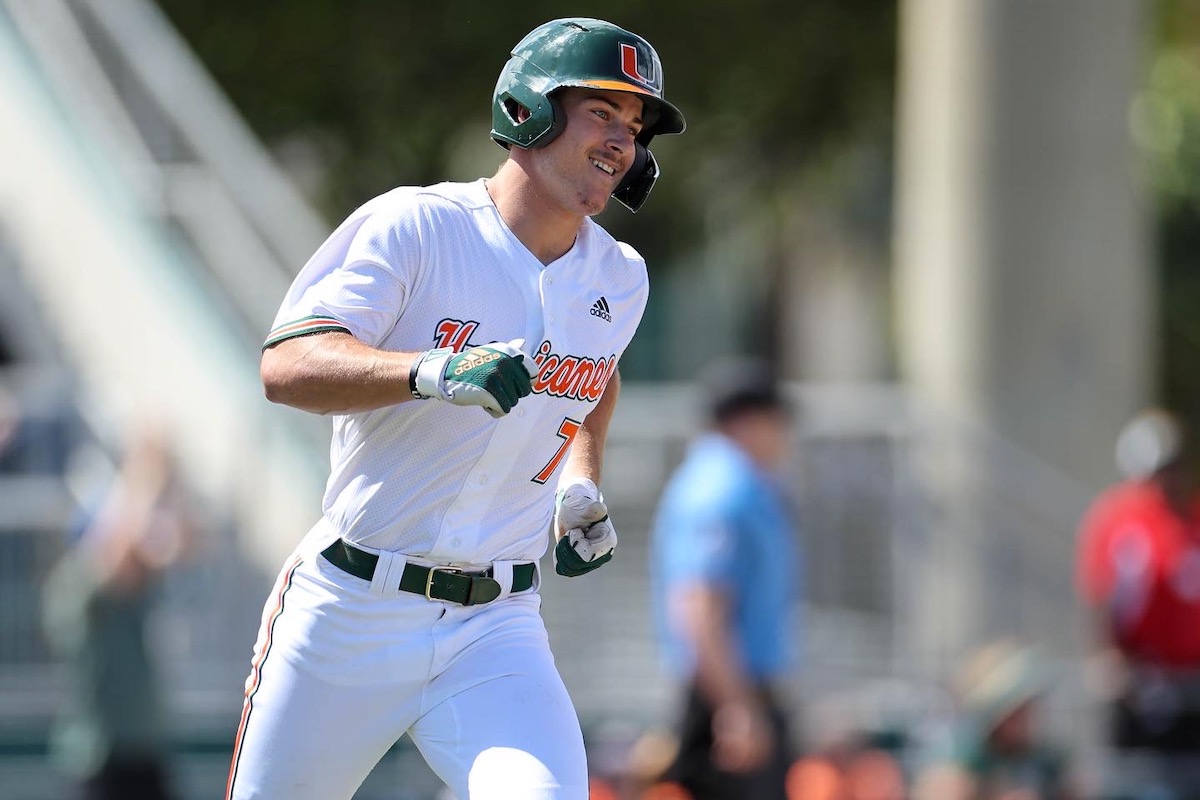 Miami, Florida – The Miami Hurricanes needed a dominant win Sunday afternoon and did just that, blanking the Harvard Crimson 10-0 to secure the home series. It had been a fairly lackluster weekend for the Canes dropping the opener before bouncing back to win 2-1 Saturday night on a strong performance from both Carson Palmquist and the bullpen.

The team played very effectively in all aspects from the pitching and defense to the hitting.

Jake Garland commanded from the mound for the day’s rubber match, by far outlasting his Crimson counter-part Jaren Zinn tossing six shutout innings holding Harvard to a pair of hits. He struck out three issuing a walk in the stellar start.

The visitors’ pitching staff were roughed up from the getgo. Adding to their woes they threw a combined four wild pitches (three from Zinn) walking seven. They equally struggled at the dish with 14 consecutive batters retired.

UM opened up the scoring in the first via a wild pitch from Zinn, allowing Dorian Gonzalez Jr. to score from third. Jacob Burke followed up with a blast to left for his second homer of the season to put Miami up 4-0.

The Crimson threatened in the second with runners at the corners.

Garland retired the first two hitters but ran into some trouble surrendering a walk and a base hit. However, the righty gloved Peter Messervy’s hard grounder tossing it over towards CJ Kayfus at first to neutralize the threat.

Miami came back for more in the second.

George Cooper flubbed a grounder committing an error as Edgardo Villegas scored on the play extending the Canes’ lead. Gonzalez Jr. joined in with an RBI single to right field pushing across Dominic Pitelli for the commanding 6-0 advantage. Two more runs were scored including an RBI single from Burke to go 2-for-2 on the afternoon. He finished the contest 2-for-3 with four RBIs.

Speaking of, the sophomore not only flashed the lumber but also put on a gun show with a cannon shot to third throwing out Hunter Baldwin on Harvard’s next trip to the plate.

IS THERE ANYTHING THIS MAN CAN'T DO!! WHAT A THROW, BURKE!

Burke wasn’t the only one making it rain. Kayfus belted his first round-tripper of the year deep to center field giving Miami a very comfortable 9-0 lead. Pinch-hitter Carlos Perez recorded his first home run of 2022 in the home half of the sixth.

Heading into Sunday it was a fairly meh weekend for The U. After dropping the opener followed by a close 2-1 victory the boys needed an imposing win. Miami fired on all cylinders in dominating fashion mollifying an outraged fanbase. Sort of. I previously mentioned there would be stumbles, even if it is against an Ivy League school that hasn’t played since 2020.

As predicted UM is heading into the highly anticipated series versus Florida 7-1. I figured they’d somehow drop one against Towson or Florida Atlantic, not to the Crimson. Still, the fans need to remember it’s baseball. Anything can happen. Case in point the Gators dropped two out of three hosting Liberty.

It was a close one between Garland and Burke but the latter earned it more going 2-for-3 with a run and four RBIs. We can’t forget that long shot he made back in the third and the bomb to left.

In games like these, the hitless guys are who get targetted. JP Gates went 0-for-4 whiffing once. He did draw a walk and pitched fine in relief so there’s that.