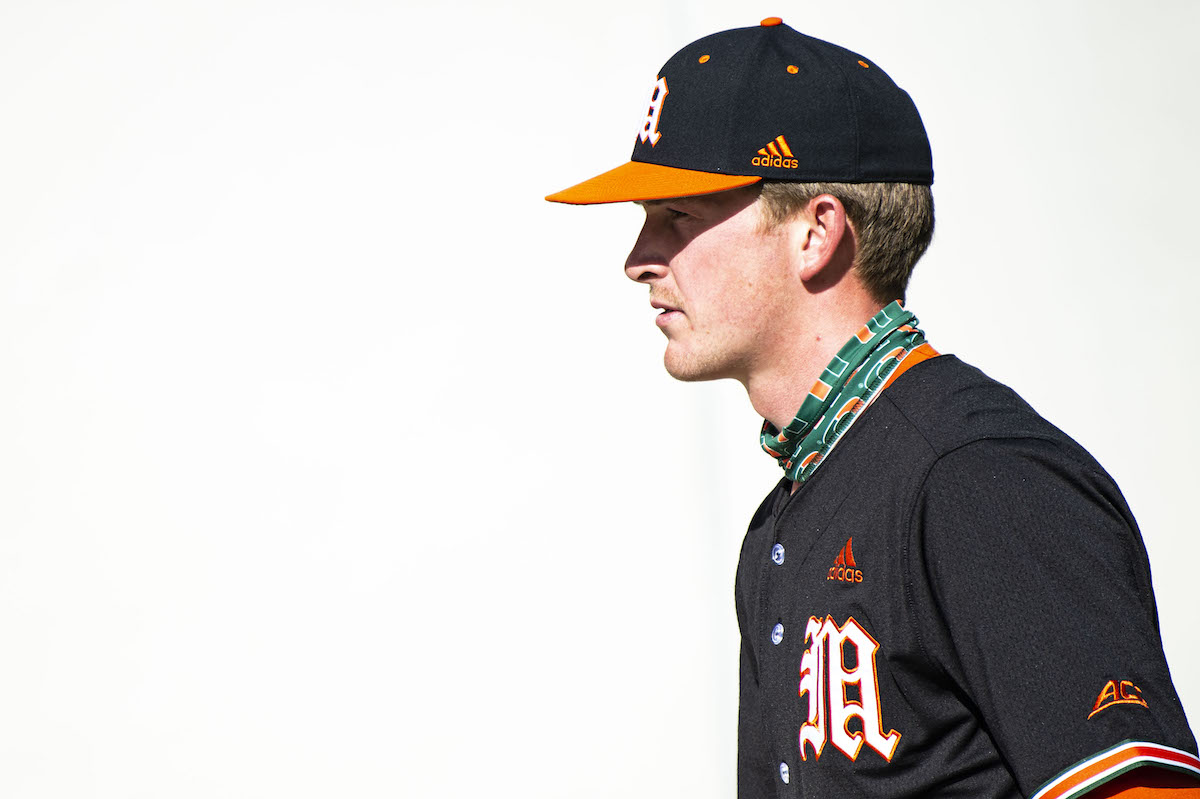 Miami, Florida – The Miami Hurricanes continue being undefeated in midweek games, blanking the FGCU Eagles 6-0 to sweep the season series. Jake Smith started in what would become a bullpen game, pitching effectively. The sophomore transfer had a productive outing going after hitters, cruising through three scoreless innings. Smith allowed a mere single. UM deployed six pitchers as the pen helped in three-hitting the Eagles. Florida Gulf Coast didn’t record a hit from the sixth inning onwards.

The defense played their part as well, assisting in turning two double plays in the fifth and seventh. The only blemish was the error by Yohandy Morales in the sixth frame. Victor Mederos pitched a pair of innings while Spencer Bodanza, Anthony Arguelles, Alex McFarlane, and Andrew Walters tossed one round each. In their three meetings, Miami outscored FGCU 24-4. The U is now 7-0 in midweek games. Prior to tonight, the Canes were averaging 12 runs a game (now 11.1 per game) in midweek contests. They scored 11 or more runs in four of those games this season.

A leadoff BOMBA by @jordan_lala_ gave the Canes the lead early and they never looked back! pic.twitter.com/kvINp8S85N

Jordan Lala got the scoring started with a leadoff homer to right field, giving Miami the early 1-0 lead. UM wasn’t through yet. The Hurricanes laced back-to-back doubles courtesy of Morales and Adrian Del Castillo to scratch another run. Raymond Gil capped off the productive inning with an RBI single to left field, scoring Del Castillo. Lala mentioned in the postgame presser that coach Gino DiMare preached the importance of winning midweek games for a long time, since beginning his tenure in the 2019 season.

DiMare hopes the team finally carries their great performances during the week into the weekend for more consistency.

Miami mounted a two-out rally at the bottom of the third. Christian Del Castillo hit an RBI single to plate home his brother Adrian, advancing to second on the throw that was not on time. Gil nearly added to the lead with a liner that was roped in by Richie Garcia.

With two runners on Bodanza pitched himself out of a jam, freezing Stephen Wilmer on the payoff pitch right at the knees.

The Hurricanes extended their lead with two runs in the sixth. FGCU’s Mason Miller had an extremely brief outing in relief, beaning Christian Del Castillo and then walking Gil before getting yanked. Tyler Shuck replaced him and ran into his own problems. He managed to get Alex Toral swinging but a wild pitch advanced both runners into scoring position. Canes catcher Carlos Perez hit an RBI single off the third baseman Alejandro Figueredo’s glove allowing Christian to score. Gil would score on another wild pitch by Shuck.

Adrian Del Castillo played in right field for the first time since 2019, he was right at home. Speaking of, he went 2-for-3 with two runs, an RBI, and a two-bagger.

Anthony Vilar is the only guy in the lineup that went hitless Tuesday night.

FGCU scored no runs on three hits committing no errors