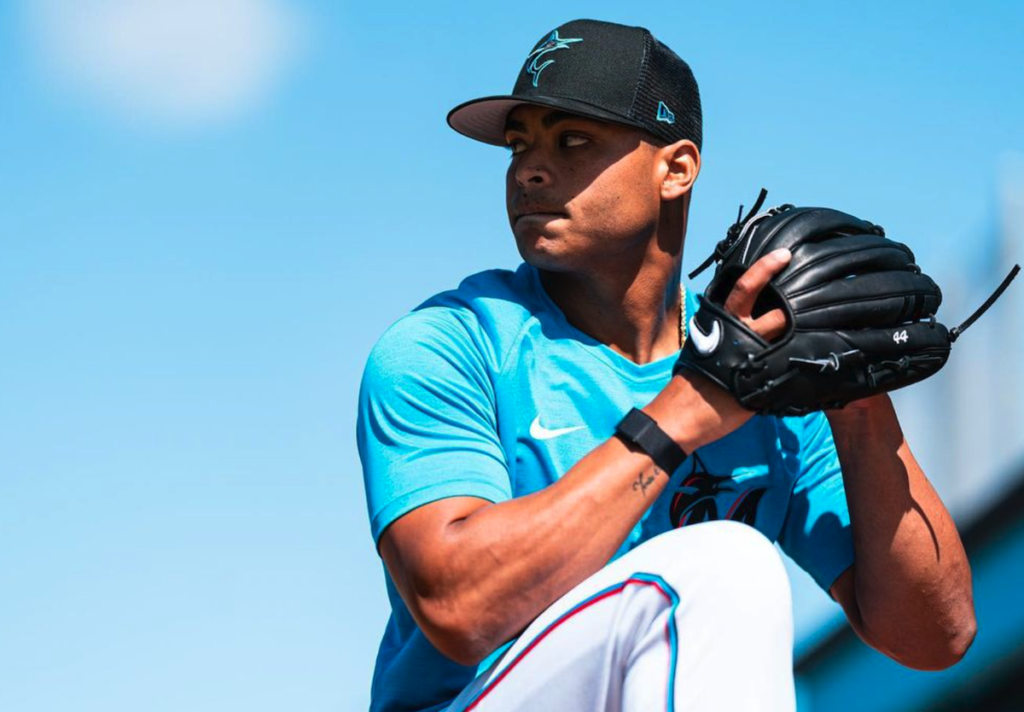 Miami, Florida – Jesús Luzardo put up a strong performance in his second spring start tossing four frames allowing an unearned run versus the Houston Astros. Despite the losing effort, the southpaw struck out five scattering as many hits making great use of both his curveball and heater.

The left-handed pitcher looked comfortable and has a perfect 0.00 ERA so far through seven frames this spring.

Midway through the first inning, the Astros made a change to their lineup, scratching Yordan Alvarez. In a corresponding move, Kyle Tucker was moved up to the fifth spot with Lewis Brinson taking over in the seven-hole. That meant an appearance by the former Marlin Sweet Lew. Brinson got a hit in three at-bats.

Covering my first spring training game of the Miami @Marlins. Haven't been up here for a long while. Also as a random statistic I've been to Arby's only twice in my life. Both times outside of Miami. The first in 2017 on my trip to Atlanta the second here in Jupiter. pic.twitter.com/XsFUK6LhJe

Jose Altuve broke the deadlock at the top of the third with a sac fly deep to right, allowing Martin Maldonaldo to tag up from third. Michael Brantly grounded into a double play to end the Astros’ trip to the plate.

In the home half of the inning, Joey Wendle poked one up the middle placing runners at the corners. Miguel Rojas answered with his own sac fly to center, scoring catcher Payton Henry to tie it up. Sweet Lew then lost Jesús Sánchez’s routine fly ball in the sun as Wendle scored on the play giving Miami the 2-1 lead. The powers that be granted Brinson a reprieve marking it down as a double. That might have been his final “gift” to the Marlins.

The fish cushioned their lead in the fourth.

Momentum swung back in Houston’s favor after Yuli Gurriel took Richard Bleier deep to left field for the 3-run homer. The Marlins failed to score for the rest of the afternoon.

The @Marlins may have come up just short against the @astros, but the 🕶️ are still 🔥!

Miami is back in action at home Tuesday against their NL East foes the Mets.

Today’s starting lineup is a bit of a preview for the regular season with the obvious exception of Henry. Luzardo was solid on the mound.  Speaking of, the southpaw tossed 29 curveballs, 18 of those were swung at with eight resulting in whiffs. That offering made up nearly half of his pitches. He also caught Alex Bregman sleeping, picking him off at second base.

It was a tough outing for Bleier who isn’t having a good spring. His previous appearance five days ago also went poorly, giving up three runs including a homer against the Cardinals in one inning of work. Wendle was by far the best at the plate on Sunday. The 31-year-old went a perfect three-for-three scoring once, knocking in a run of his own. He’s hitting .438 in spring training. Willians Astudillo, a recent acquisition from the Minnesota Twins, subbed in for him in the later innings. Astudillo is quietly putting together his own productive spring hitting .571 in eight plate appearances.

There was lots of nostalgia returning to Roger Dean Chevrolet Stadium for the first time since 2019. I got to see the Astros and also Brinson one more time as he popped out to Andy to left on his first at-bat of the day. Overall, it was an OK day for the Fish despite the close loss. Garrett Cooper going hitless in four at-bats was a bit disappointing but truth be told, one of his line drives was snatched up by the shortstop Jeremy Peña.