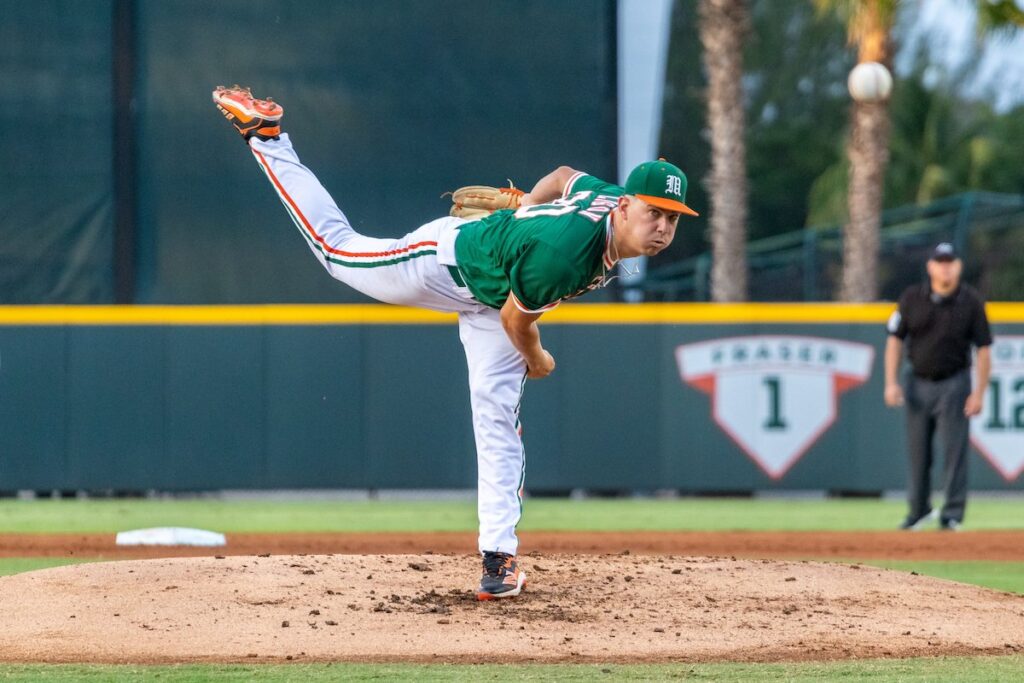 The freshman did not get any run support with Notre Dame going yard on him twice. Miami had two opportunities to score in the late innings, failing to drive in the runs stranding eight Friday night. Temple was in total control one-hitting the Hurricanes during his six-inning stint working in a gem. The relief corps seemed to be on the cusp of wavering only to shut the door on any potential comeback.

Jack Zyska sends a solo shot over the wall in left!!!!

The Fighting Irish threw the first punch in the second inning with a solo homer to left field by Zyska. Lingon struggled a bit after giving up the dinger surrendering a double to David LaManna followed by a hit-by-pitch on Brooks Coetzee. LaManna hit one deep to center with Jacob Burke missing on the diving catch. The righty regained his groove making a nice heads-up play, quickly scooping up Penney’s bunt and firing it to third for the out. The Miami starter retired the next two hitters to mitigate the damage.

With a runner at first, Yohandy Morales nearly lifted one over the fence at center field in the third but Ryan Cole made the catch on the warning track denying the Canes.

Notre Dame flexed again in the fifth with a two-run blast from Brannigan to left field.

END 7 | @willmercer43 gets a huge double play to get the Irish out of the jam in the seventh!!!!

Miami came painfully close to a rally after the seventh-inning stretch. Dorian Gonzalez Jr. hit up the middle for a single with Gaby Gutierrez slipping one past the right side putting runners at the corners. The comeback fell short when Dominic Pitelli grounded into a bang-bang double play.

Busting out the lumber once more, Notre Dame’s Penney blasted another making it 4-0 in the eighth. The visitors tacked on an insurance run in the ninth via an RBI single. The Hurricanes loaded the bases on their final at-bat with Pitelli getting a second chance, however, the shortstop went down swinging.

He strikes out his 5th of the night in a scoreless sixth!!

This one slipped away in the end. With Virginia Tech defeating Duke, the Miami Hurricanes no longer lead the ACC Coastal. Elsewhere, Virginia walloped Louisville permitting the Fighting Irish to sit atop the Atlantic. Tomorrow’s rubber match will be two teams fighting to clinch their respective divisions. In Miami’s case, if the Hokies win tomorrow their season finale’s result will not matter.

Even if Virginia Tech wins, the Hurricanes need to do their part and clinch the last weekend series. If successful, it will mean a Top 8 National Seed. Failure to do so will likely put more emphasis on their performance in the ACC Tournament at Charlotte.