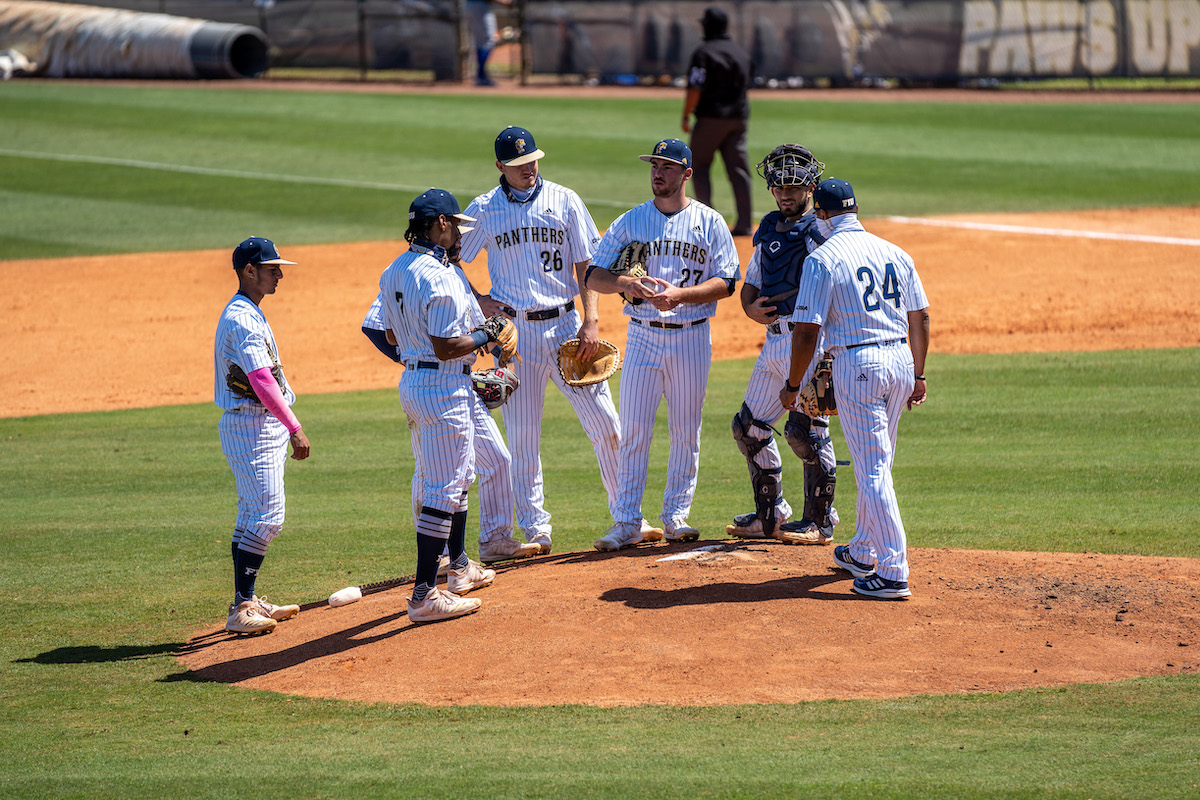 Miami, Florida – It wasn’t their weekend. The FIU Panthers were utterly outmatched as the Indiana State Sycamores took the doubleheader and weekend series. Defensive miscues, poor pitching, and weak hitting proved disastrous for the blue and gold, losing 9-4 then 7-2. The home team was outscored 29-8 this series. Saturday’s game was rained out, setting up Sunday’s baseball marathon that saw the Panthers drop to 4-6. They have now lost four straight games.

Bad pitching doomed the Panthers in the first game of the twin bill. Matt Fernandez represented FIU, squaring off against Javin Drake in what became a one-sided pitching duel. Fernandez was coming off a good outing versus the Miami (OH) Redhawks last weekend but lacked the stuff today. And it wasn’t just him either. The arms issued a grand total of 14 walks combined, tallying eight strikeouts. The hitting, meanwhile, was very slow in producing runs. It wasn’t until the sixth inning that they managed to get on the board.

Big swing from Dominic Cusumano and he's got his first 💣 of the season‼️ Trees in front now, 1-0. pic.twitter.com/mKnvEVHFxb

Dominic Cusumano lifted one towards right field for the first run of the game in the second frame. He’d make an encore performance next inning. In the aftermath, the freshman looked out of sorts, giving up a double, a wild pitch, and then a walk. The defense stepped up to limit the damage but things got worse.

The Sycamores tattooed Fernandez for four more runs in the third. Indiana State broke out the lumber, launching two over the fences courtesy of Max Wright and Cusumano. The FIU starter would go no further, replaced by Dalton Plattner in relief. Plattner ended up walking three of six batters faced in his time on the mound. Speaking of, the visiting trees added two more in the fourth, both via bases-loaded walks.

FIU finally made some noise in the sixth after Mario Zabala homered to rightfield for the two-run shot, scoring Adrian Figueroa. However, these advances were negated by a bullpen unable to keep a lid on Indiana State’s potent offense that recorded two additional scores in the seventh, fueled by a trio of walks. The Panthers answered with a pair of runs but it was not enough. The abhorrent performance on the mound by the relief corps made any rally an uphill battle.

T8 | Bases loaded for the Sycamores as FIU goes to their fifth arm of the day. ISU has drawn a season high 14 walks in game one of the doubleheader.

This time around, there weren’t nearly as many walks but the defense was sloppy. Florida International committed four errors, six in total this series. Same as before the Sycamores took an early lead and never lost it. Orlando Hernandez mitigated opposing batters but after giving up back-to-back hits which included a run, he was yanked in the fourth in favor of Jan Figueroa to get the last out.

Indiana State scored in three consecutive innings before having a big sixth. Brian Fuentes scored in the second on a sac bunt by Sean Ross that resulted in an error on the play. Jordan Schaffer made it home on a passed ball by catcher Ben Rozenblum the following frame. The Panthers responded in the third, battling to salvage the series. Steven Ondina hit an impressive RBI triple to right field, scoring Zabala to make it a one-run game.

The Sycamores countered with another run in the fourth, an RBI single by Grant Magill. FIU struck back continuing the seesaw battle. Juan Teixeira laced an RBI double to left field, bringing in Derek Cartaya to keep it close. This is as good as it got. ISU opened up with four runs in the sixth inning putting away the blue and gold for good. Schaffer extended the lead with an RBI double but what really messed up Florida International was another costly error by third baseman Rey Hernandez, his third of the game. The defensive mistake emptied all the bases, driving in three runners to effectively ice it. As previously mentioned, Indiana State was to serve as an early indicator of where the team was at. It doesn’t look good. They will now travel to face Coastal Carolina March 12-14 for a four-game set.

Adrian Figueroa batted .200 this weekend (2-for-10) notching one RBI. Struck out twice.

Assistant coach Dax Norris got tossed in the home half of the inning for stepping onto the field arguing a foul ball near the third base line.

Steven Ondina claims this one for hitting consistently in the doubleheader. He went 5-for-7 (.714) collecting a run and an RBI. Ondina did commit an error in all three games but at least he was productive at the plate Sunday. The freshman needs to improve defensively.